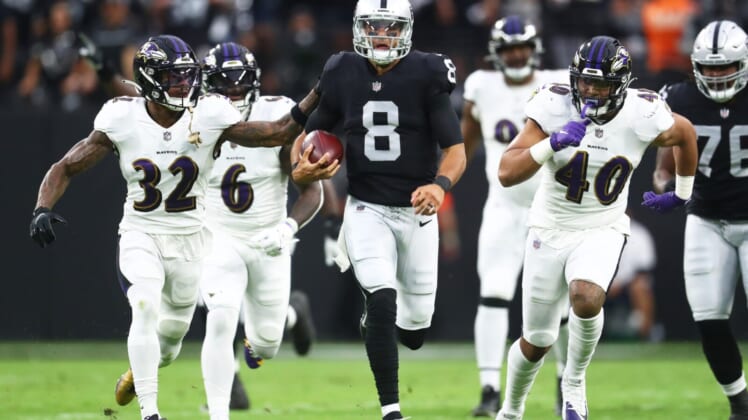 Since the Las Vegas Raiders released wide receiver Henry Ruggs III, the offense has short-circuited. It looks nothing like the unit that scored 33-plus points in consecutive games after former head coach Jon Gruden’s resignation.

Sure, Ruggs’ absence adversely impacts the offense, but a team’s ability to move the ball shouldn’t revolve around one player.

What if Ruggs had suffered an injury this season? Should we have expected the offense to fold without him? Absolutely not, so why is it an acceptable excuse for a squad with quarterback Derek Carr, who played some of his best football earlier in the season, star tight end Darren Waller, reliable slot receiver Hunter Renfrow and Pro Bowl running back Josh Jacobs to struggle simply converting a third down?

Over the last two games, Vegas has gone 2-for-16 on third downs and 2-for-5 in the red zone. The offense has a more significant issue that goes beyond the absence of its most dynamic wide receiver. The Raiders haven’t utilized enough of their talent on the roster.

Following an embarrassing 32-13 home loss to the Cincinnati Bengals, the Raiders didn’t have definite answers for their inept offense other than a blanket statement highlighting poor execution.

We can see the problems, but what are the solutions? Play-caller Greg Olson should increase the roles of three players in an attempt to spark the offense.

Carr supporters, take a deep breath. This isn’t a suggestion to bench the starting quarterback, but the Raiders have Marcus Mariota on the bench next to the cobwebs when he should be on the field to help convert 3rd-and-short into first downs.

Last week, the Raiders failed to move the ball four or fewer yards on third down three times, which led to a field goal and two punts. They could’ve used Mariota to extend one or more of those drives.

Olson can feature Mariota in zone-read-option designs in short-yardage situations, especially closer to the goal line. He’s recorded just three rush attempts for 41 yards. The Raiders have an athletic X-factor and barely use him in spots that could showcase his skill set.

The Raiders signed DeSean Jackson after they released Ruggs. Though he needs time to pick up the offense, the 34-year-old can force deep safeties to respect his speed while on the field.

In Week 10 against the Kansas City Chiefs, Jackson caught a 38-yard pass, but he tried to shake cornerback Rashad Fenton and fumbled the ball. The Raiders should use him for at least 50 percent of the offensive snaps despite his egregious mistake.

Jackson has played 17 percent and 34 percent of the snaps in two games, but he’s seen just one target. During last week’s postgame press conference, interim head coach Rich Bisaccia said the team had packages and situations for Jackson to make big plays, but clearly, Carr chose to look elsewhere.

The coaching staff should expand Jackson’s role to build some chemistry with Carr, who must find ways to get him involved in the passing attack. With the threat of a speedy wideout over the top, the Raiders will see the middle of the field up on shorter passes, which may result in more yards after the catch for Waller, Renfrow and the running backs catching out of the backfield.

Olson has to remind himself what made Foster Moreau stand out during his rookie campaign.

Coming out of LSU, Moreau had built a reputation as a solid pass-blocking tight end without much production in a receiving role. Still, he became an immediate red-zone threat, hauling in all five of his touchdown passes inside the opponent’s 20-yard line in 2019.

Moreau ranked second on the team in touchdown receptions as a rookie, but he finished the season on injured reserve with a torn ACL and then took a back seat to Jason Witten last year.

Now healthy, Moreau should serve as a top target in the red zone and a pass-catching option when the Raiders don’t have short and manageable third-down situations.

The third-year tight end can help this offense move the ball and score in critical moments. Moreau reminded everyone of his knack for coming up with big plays, catching a 19-yard touchdown pass early in the fourth quarter against the Bengals in the previous outing. He also had six receptions for 60 yards and a touchdown against the Philadelphia Eagles in Week 7 while Waller sat out with an ankle injury.