A Julius Randle trade is a very real possibility for the New York Knicks, as they begin to look ahead to the offseason this summer.

Season three for Randle in New York has been a massive disappointment. It seems like an odd narrative for a player averaging 20 points, 10 rebounds, and five assists per game, but that is the sad truth. After a 2020-2021 season where the 27-year-old was showered with chants of “MVP” from the New York faithful, this season has been the polar opposite when it comes to winning.

While Randle has still logged good numbers, his three-point shot has not been as reliable, and his overall inconsistency has been a major part of the team going from a fourth seed last year, to a team that won’t even make a play-in game this season. Obviously, the Knicks dumpster fire isn’t all his fault, but as the franchise’s top star and highest paid player, most of the responsibility falls on him.

Following another night where Knicks fans hurled boos at the former Lakers’ first-round pick, a new set of rumors swirled that Randle asked team executives for a trade. He has denied those claims since but a change of scenery may be the best end result for the team and player. Assuming the Knicks do make their former NBA All-Star available, here are the three possible Julius Randle trade scenarios to improve the team in 2022-2023 and beyond.

Julius Randle to the Pacers for Myles Turner

Indiana Pacers center Myles Turner has been a players Knicks decision-makers have reportedly had an interest in acquiring for years. With Mitchell Robinson set to be a free agent this offseason, and the team and his agent no closer on an extension now may be the time to pull the trigger on a deal for the big man from Indy.

Randle is certainly a bigger difference-maker night-in and night-out than Turner. What makes this trade even more of a logical option for the Pacers next season is it would only add an extra $2 million to their salary cap. However, that does increase in the three years following, including in the final season which is a player option. 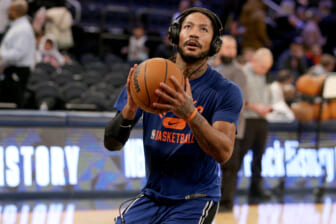 Meaning the Knicks may have to add a cherry on top despite giving up a better all-around player. The organization has a bundle of extra picks in the 2023 draft. Adding one first and a second-round pick to this deal likely makes the swap a no-brainer for the Pacers, and gives the Knicks an upgrade at the center that is only on the books for one more season.

This would be the thinking big, but not necessarily likely option. Knicks fans are dying for the team to add a superstar talent via trade. And New York native Donovan Mitchell is high on that list. As of now, the All-Star point guard from the Utah Jazz has not asked for a trade. However, the team is unlikely to contend for a title this season, and rumors have swirled for years that it could be just a matter of time before Mitchell wants out.

In a best-case scenario, the Jazz gets bounced from the playoffs in the first round and Mitchell requests a new home for next season. To make the salaries match up, the Knicks would send Randle and disgruntled PG Kemba Walker to the Jazz in a swap. Like the Turner trade, they would need to sweeten that pot further. Meaning the addition of both first-round picks in 2023, as well as two second-round picks might make a deal possible. And if New York has to add their top pick in 2022, they should do it and score the elite point guard they haven’t had since the 1970s.

Another way the team could go about moving Randle is by using his value to get rid of contracts they don’t want and take on bad deals and messes from other teams. Enter Lakers and Rockets point guards Russell Westbrook and John Wall.

Both are in the midst of career low points for different reasons. Each has massive contracts next season that would see them make $44 million. On the surface that seems like a non-starter. However, if the Knicks want to clear their books sooner, they can move the contracts of Randle, Walker, and/or the disappointing Evan Fournier for either damaged former star. 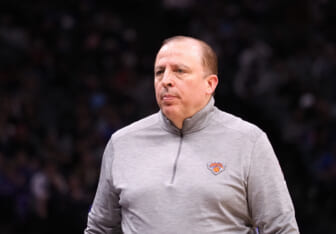 Also Read:
Tom Thibodeau expected to be back for New York Knicks in ’22-’23

In doing this, they clear a ton of cap space in upcoming seasons, get players that are only on the books for one more, and a needed point guard who hopefully contributes next season and aids the continued growth of young guns RJ Barrett and Obi Toppin. It’s a win-win for the Knicks long-term.