The point guard situation for the New York Knicks has been an utter disaster in 2021-2022, and it looks like Derrick Rose won’t be returning to bring some late positivity before this season comes to a close.

Going into this season, there was a great deal of hope surrounding where the Knicks would finish in the Eastern Conference. While matching the shocking fourth-place finish they had in the conference last year was unlikely, a return to the playoffs seemed all but guaranteed.

This season was their second under NBA Coach of the Year Tom Thibodeau, they returned many of the key free agents from the year before, and they even added talented backcourt veterans in Kemba Walker and Evan Fournier. However, it wasn’t long before the signs started to show that this season would be a polar opposite of 2020-2021.

A key factor in the team’s success last season was the impressive play of 14-year veteran Derrick Rose. The one-time league MVP was a reliable floor general, veteran leader, and secondary scoring behind Julius Randle in many major moments. However, it should come as no surprise then that in a season where the team took a major step back, Rose only played in 26 games.

In December, the 33-year-old injured his ankle in a game against the Houston Rockets. The injury eventually led to surgery and hopes Rose could return in a month or two. However, the injury-prone guard needed a second surgery in February and a return this season remained unclear. Well, based on an update from The Athletic Knicks beat writer Fred Katz, a return for Rose this season doesn’t seem guaranteed.

“Julius Randle (quad) and Mitchell Robinson (back) are both game-time decisions tonight in Miami, Tom Thibodeau said. Derrick Rose participated in parts of shootaround but is not doing contact work,” Katz tweeted on Friday.

The disaster of the Knicks point-guard position in 2021-2022

Rose taking part in shootaround is a positive. However, with only nine games left in the season and five games out of a play-in spot, Knicks fans can’t expect the team to push for him to return considering his long history with injuries and being signed for two more seasons at $14 million and $15 million, respectively. The final year in his deal is a team option.

The news is just the latest icing on the bad news cake of the franchise’s disappointing season and point-guard situation. Combined with the fallout of Walker’s relationship with Thibodeau and the team sending him home halfway through the year, the Knicks haven’t had a true starting PG for much of the season. 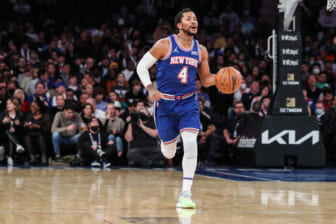 Also Read:
4 players the New York Knicks should trade in the offseason

It will be interesting to see how they fix that situation in the summer with Walker expected to be traded and Rose an unreliable every game option.

The Knicks return Wednesday on the NBA games today schedule to play the Miami Heat.