The New York Knicks are about to get a huge addition to their backcourt, as Kemba Walker has agreed to a contract buyout with the Oklahoma City Thunder, and will shortly sign up to play in the Big Apple.

ESPN’s Adrian Wojnarowski broke the news of Walker’s buyout and imminent signing with the Knicks:

As is clear from Woj’s report, Walker’s contract was too expensive for the Boston Celtics to justify keeping him. Coach-turned-executive Brad Stevens’ first big move was to ship Walker from Beantown to OKC, but speculation swirled immediately that the Thunder wouldn’t be Walker’s final destination.

It’s hard to imagine Walker landing in a much better situation. He’s struggled through injuries of late, and now joins a rising, big-market team with an iconic franchise, great fan base, phenomenal home venue and an elite coach in Tom Thibodeau.

Although the Knicks re-signed veteran floor general Derrick Rose, he’s always capable of coming off the bench, and Walker’s addition will create some great competition between the two dynamic guards. If anyone knows how to reinvent himself and overcome a severe injury history, it’s Rose, so Walker can learn a lot from his new teammate on that front. 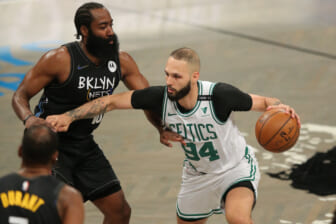 Between Walker, Rose, free-agent addition Evan Fournier and incumbent studs Julius Randle and RJ Barrett, it suddenly looks like New York might build on its playoff berth from last season and actually remain among the better teams in the East.

How valuable Walker proves to be depends on what the Knicks sign him for, the duration of his contract and how healthy he can stay.