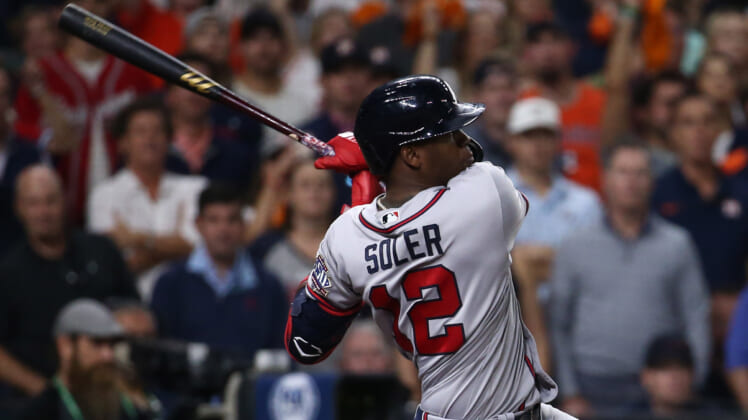 Jorge Soler is coming off a standout MLB postseason run with the Atlanta Braves. Rewarded with the World Series MVP for his performance at the plate, Soler was a vital part of the Braves’ road to triumph.

For the better part of his MLB career, Soler has been a formidable power threat from the right side. He has frequently finished in the top 10 percent of MLB in average exit velocity, hard-hit percentage and barrel percentage. While he has recently spent a lot of time as a designated hitter, Soler is accustomed to playing right field and is in the prime of his MLB career at 29.

Once a lacking part of their operation, the Rays finished tied for sixth in MLB in home runs (222) in 2021. Power was a featured part of their offense, and Soler helps them pick up right where they left off in the regular season. He presumably becomes their primary designated hitter, adding a proven power hitter.

Soler adds another weapon to the Rays’ outfield. He’d join a rotation that includes Austin Meadows, Randy Arozarena, Kevin Kiermaier, Manuel Margot and Brett Phillips. Plus, there have been reports of the Rays being receptive to trade offers for Kiermaier. If they indeed move their long-time center fielder, it furthers the need for them to get another outfielder for the big-league roster.

The Rays are in the midst of a championship window and showed an openness to make a bit of an uncharacteristic move for the sake of winning in acquiring a player who rarely plays the field. Why not do the same in getting a younger version of Cruz in Soler, who can also play the field?

All that being said, the Rays may prefer to stay in-house to address their outfield rotation and leave their options open at DH, as Meadows has assumed the role in the past. 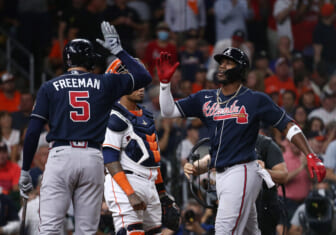 The Cardinals have a sturdy defensive outfield with individuals who had plausible and/or career years at the plate in 2021 (Tyler O’Neill, Harrison Bader and Dylan Carlson). At the same time, they could use another viable outfielder, and Soler fits the bill.

Sure, Soler can strike out a little too much; that’s going to happen with any power hitter. Simultaneously, he would give the Cardinals a legitimate home run threat and someone who clears the bases. Down the stretch of 2021, Soler looked like the player who hit 48 home runs for the Kansas City Royals in 2019.

Investing in upside is optimum, and Soler brings plenty of that, as his market likely features a short-term deal to prove that he can consistently be a top-level power threat. Albeit the Cardinals’ outfield made strides in 2021, it has been inconsistent over the last three years as a whole, creating merit for the idea of them rolling out a four-man outfield next season.

There’s also the possibility of the National League having a designated hitter in 2022 and beyond. In the scenario that the universal DH is implemented, Soler can fill the role for the Cardinals and play right every once in a while/when injuries hit the team’s outfield.

At the end of the day, though, the Cardinals may choose to internally find outfield depth and not hold out hope for the universal DH. 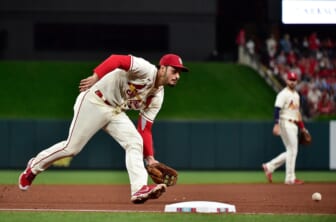 The Rangers decided to spend $561 million before the MLB lockout. It’s safe to include the Rangers in any free agent conversation, as they still have parts of their roster that need bolstering and the front office has made it clear that it’s sick of finishing at or near the bottom of the American League West. Soler would be a savvy signing for the Rangers.

Yes, Texas added veteran right fielder Kole Calhoun, but he doesn’t prevent them from adding another outfielder. Unfortunately, injuries and offensive inconsistency have held back Calhoun of late, making it wise for the Rangers to have a capable starter behind him. In the meantime, Soler would be manager Chris Woodward’s primary DH.

All of a sudden, the Rangers have a respectable offense. Their order includes Corey Seager, Marcus Semien, Adolis Garcia, Nate Lowe and Isiah Kiner-Falefa. Include Soler in that mix, and the Rangers have an offense that should finish in the top-half of MLB.

The Rangers should be investing in young talent and players on the cusp of their prime. Soler fits that description. He provides them with outfield depth, more offense to a group that was one of the worst units in the sport last season and more respectability.

A short-term, prove-it investment in Soler would be the cherry on top of a superb offseason for the Rangers.