Tickets for 2020 World Series in Texas already sold out 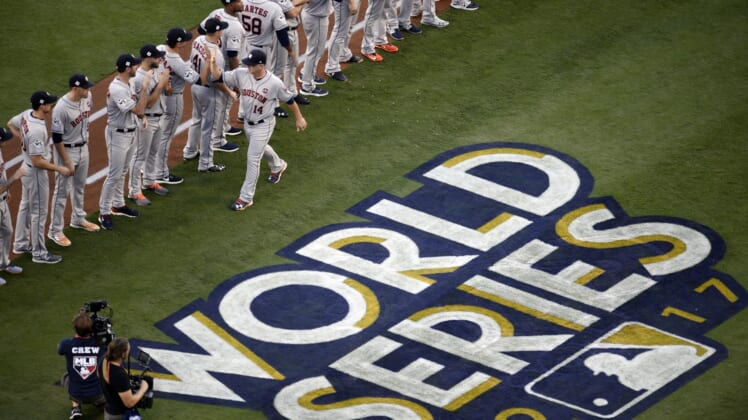 The first two rounds of the 2020 MLB Playoffs have been played without fans in attendance due to the COVID-19 pandemic.

Major League Baseball has done everything in its power to make sure the 2020 season is completed after a plethora of breakouts related to the virus during the early stages of the truncated 60-game campaign.

It is now looking for another revenue source during the National League Championship Series and World Series, both of which will be played at the Rangers’ new Arlington stadium in Texas.

Tickets to the 2020 World Series already sold out

According to A.J. Perez of Front Office Sports, there were 11,150 available tickets for each game at Globe Life Field. That’s about 29% capacity. With tickets on MLB.com starting at a mere $75.00, they were sold out within 90 minutes. It tells us a story about how in-demand attending live-sporting events is right now amid this worldwide pandemic.

Doing some more digging, we have found out that those in the secondary market are looking to cash in big time as it relates to this demand.

As you can see, tickets for Game 1 are starting out at $425.000 on StubHub. That’s almost six times the price as MLB.com when their tickets initially went on sale.

As we’re seeing around the NFL world, teams that have decided to allow a limited number of fans into games have seen a high demand for tickets. That’s not changing with the 2020 MLB Playoffs ongoing.

All of this is before we even known who is playing in the Fall Classic starting later in October. As you might have already learned from this article, it is being played in a bubble. The same thing can be said for both the divisional round and league championship series.

In the American League, the Tampa Bay Rays are going up against the New York Yankees while the Oakland Athletics are taking on the Houston Astros. Both AL series are in Southern California.

Over in the National League, the Atlanta Braves are going up against the Miami Marlins while two Southern California rivals in that of the San Diego Padres and Los Angeles Dodgers are playing in the state of Texas. The Dodgers remain overwhelming favorites to win their first World Series since 1988.