MLB wants to host fans for NLCS and 2020 World Series 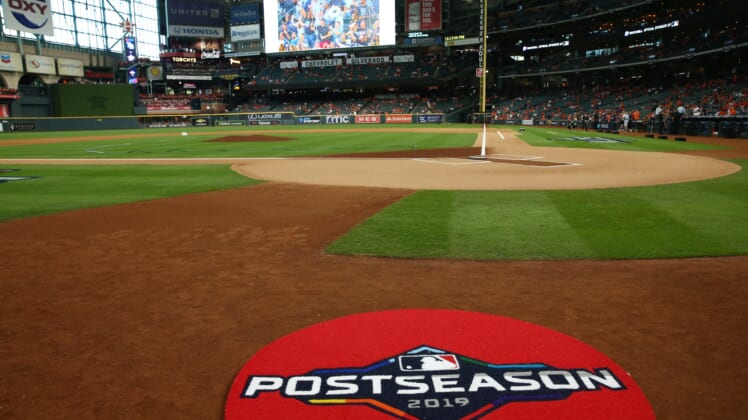 Oct 4, 2019; Houston, TX, USA; The 2019 MLB post season logo is seen on a on deck circle before game one of the 2019 ALDS playoff baseball series between the Houston Astros and the Tampa Bay Rays at Minute Maid Park. Mandatory Credit: Troy Taormina-USA TODAY Sports

Just like that, the 2020 MLB Playoffs are now set to begin in less than a week. It’s been a fast pace throughout the truncated 2020 season after Opening Day was postponed several months due to the COVID-19 pandemic.

At least initially, it did not seem like fans would be in attendance throughout the duration of the playoffs. That might no longer be the case.

“We are pressing ahead to have fans in Texas,’’ MLB Commissioner Rob Manfred told USA Today Sports. “One of the most important things to our game is the presence of fans. Starting down the path of having fans in stadiums, and in a safe and risk-free environment, is very, very important to our game.’’

Tickets are expected to go on sale at some point here soon. As for the American League Championship Series in Southern California, fans will be a no go. California Governor Gavin Newsom made it clear during the early stages of the COVID-19 pandemic that fans would not be allowed in attendance throughout the 2020 calendar year.

MLB expanded its playoff field to 16 teams this season. Two teams from each division are guaranteed a spot in the postseason with the two teams boasting the best record after that also securing a playoff spot.

As of Wednesday evening, the following teams have clinched playoff spots.

If fans are able to attend the ALCS and World Series in Arlington, it will add to what we expect to be an already fun fall around the Major League Baseball world.