One week down, and only 14 more to go until it’s officially bowl season as we prepare for a very full Saturday in college football Week 2.

The next few months will provide fans of college football with endless highlights, plenty of lowlights and everything in between.

This weekend’s slate of games doesn’t feature a ton of compelling matchups, as weak opponents have been scheduled for many of the top teams around the nation. That said, there’s still plenty to look forward to.

Here’s a look at the biggest storylines heading into the weekend.

Given the way the Horned Frogs dismantled Southern last weekend, it’s highly unlikely that an upset is in the cards Friday night on the road against SMU. The Mustangs will obviously have to put forth a legendary effort to pull off the win after getting blown out last weekend against North Texas. This is the only game on national television Friday night, and we fully expect the Horned Frogs to put tons of points on the scoreboard in prime time.

That being said, TCU could get caught looking ahead to their Week 3 contest against Ohio State, which will be a defining moment for its 2018 season. Sophomore quarterback Shawn Robinson will need to mind his Ps and Qs to keep his team on track.

Wolverines desperately need to work out the kinks

Saturday’s loss at Notre Dame was ugly. Michigan’s offense couldn’t get out of its own way. The offensive line was a disaster — both in the running and passing games — and Shea Patterson missed a couple of big opportunities to connect downfield.

Defensively, the Wolverines were better. But the Fighting Irish did dominate the trenches at times. In short, Jim Harbaugh’s team did not show up for the 2018 opener with the kind of intensity and execution many expected.

Thankfully this Saturday provides Michigan with the perfect opportunity to get well against a Western Michigan squad that allowed Syracuse to put 55 points on the board in Week 1. If the Wolverines can’t dominate at home against the Broncos, something very wrong is afoot in Ann Arbor. 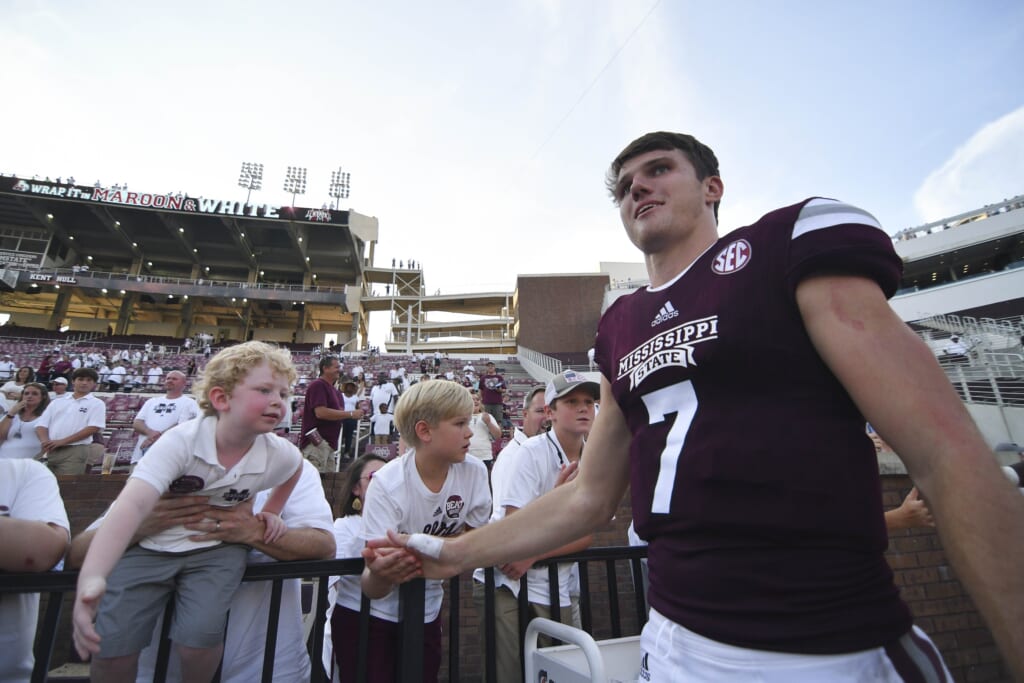 Senior Mississippi State quarterback Nick Fitzgerald didn’t play in Week 1 due to a suspension for violating team rules. Now he’s back in action and will be under center for the Bulldogs Saturday on the road against Kansas State. It’s going to be fascinating to see how he performs, because last weekend sophomore Keytaon Thompson was a scoring machine in his stead, putting up seven touchdowns in the team’s 63-3 blowout win over Stephen F. Austin.

Fitzgerald and Thompson are both dual-threat quarterbacks who put stress on opposing defenses in various ways. But based on the level of explosiveness we saw from the Bulldogs’ offense in Week 1 — a level Fitzgerald has approached only once in his career thus far — it’s going to be interesting to see what new head coach Joe Moorhead does if Fitzgerald struggles out of the gate.

Chip Kelly’s debut with UCLA went poorly, to say the least. Wilton Speight exited with a back injury, freshman Dorian Thompson-Robinson was pretty rough with his accuracy, and then Kelly himself sunk his team’s chances with an ill-conceived decision on fourth down with plenty of time left on the clock in the fourth quarter against Cincinnati. In the end, the Bearcats — two-touchdown underdogs — walked out of Pasadena with a nine-point win.

Now the Bruins are headed to Norman for a date with one of the hottest teams in the nation. Oklahoma is coming off a huge blowout win over Florida Atlantic. In addition to featuring a dynamic defense, the Sooners have one of the most talented young quarterbacks in the nation, Kyler Murray, who dazzled in his debut as the team’s starter.

Needless to say, Kelly and the Bruins are staring an 0-2 start in the face right now. It’ll take nothing but their best to avoid that fate, and even their best might not be good enough.

Can Gamecocks compete against Georgia? 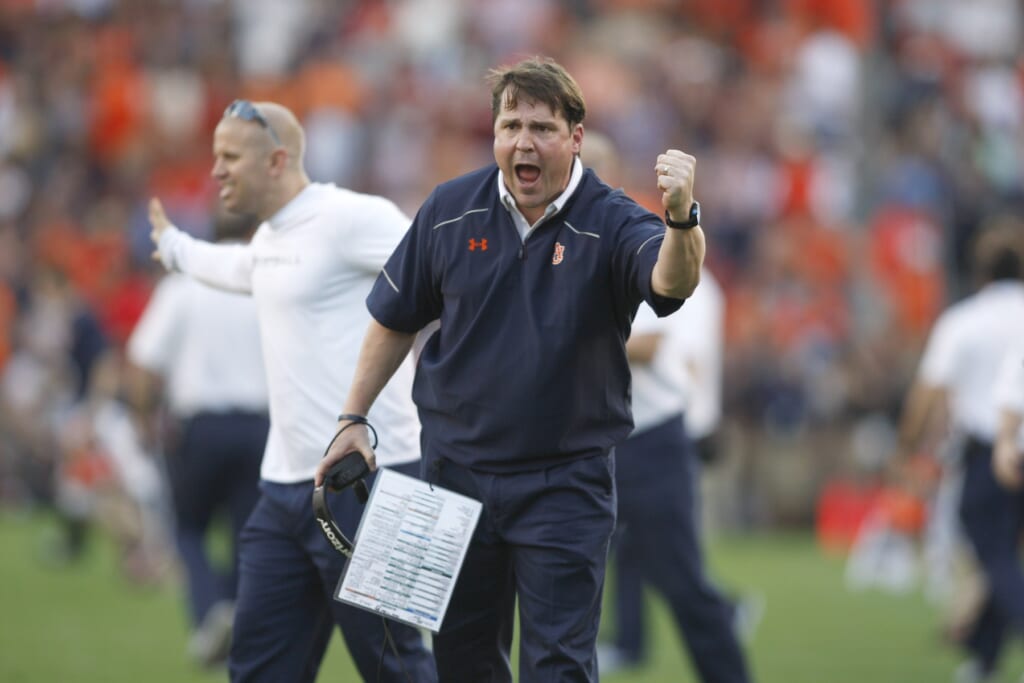 Will Muschamp’s Gamecocks come into Saturday’s SEC battle against Georgia on a high note, having won their opener by the blowout score of 49-15 against Coastal Carolina. This weekend’s game obviously carries quite a bit more weight, as the Gamecocks could lay temporary claim to the SEC East crown with an upset over one of the best teams in the nation.

Williams-Brice Stadium will be rocking for this game. But if we’re being honest the environment likely won’t impact the Bulldogs much, as this team is battle tested and passed with flying colors last year. It’s going to come down to whether the Gamecocks can stop Georgia’s high-powered offense, and whether quarterback Jake Bentley and Co. can take care of the football.

The Texas A&M faithful got to soak in a blowout victory during the first game of the season, which obviously was Jimbo Fisher’s first as the head coach of the Aggies. Beating Northwestern State to a pulp won’t really do anything to prepare this team for what’s coming, however, with Clemson coming to town in college football Week 2.

The Tigers feature one of the best defensive fronts in the nation, meaning Trayveon Williams — the catalyst for Texas A&M’s big win last weekend — might find himself bottled up early and often in this game. This means Sophomore Kellen Mond will need to have the best game of his young career in order to propel his team to an upset over the No. 2-ranked Tigers.

How the Aggies perform Saturday at College Station will provides us with some insight into what we should expect from Fisher’s program the rest of the season. 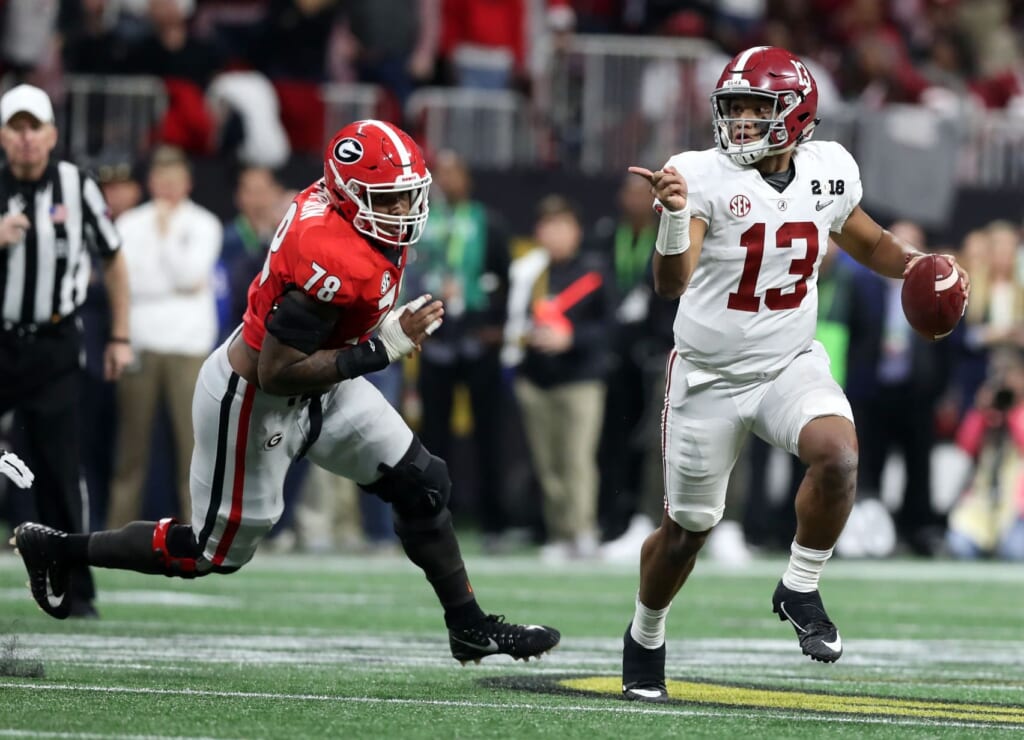 It took less than one full game for Nick Saban to see the light and name Tua Tagovailoa the starting quarterback for the Crimson Tide going forward: “Everybody knows that Tua’s gonna start and we’re gonna use Jalen’s skill set in the future,” Saban said, per ESPN.

The sophomore was electric against Florida Atlantic, leading five touchdown-scoring drives while making brilliant throws, reading the field with expert-level clarity and providing plenty of oomph on the ground as well.

Saturday’s home game against Arkansas State should help Tagovailoa to pad his stats, while at the same time providing Jalen Hurts with some opportunities to shine. But whatever Hurts does, barring injury to Tagovailoa this is clearly the sophomore’s offense to run now, and for the rest of the season.

After near-miss at home, Penn State needs a fast start against Pitt

The post-Saquon Barkley era at Penn State nearly got off to a disastrous start in Week 1, as Appalachian State nearly pulled off a huge upset in Happy Valley. In the end, it took a heroic effort by quarterback Trace McSorley in the final minute of play to get the game to overtime.

The Pittsburgh Panthers will provide McSorley and Co. a much sterner test this weekend as the two geographical rivals slug it out at Heinz Field on ABC.

Pitt is coming off a nice 33-7 win over Albany. Quarterback Kenny Pickett scored three touchdowns in the game and should be able to put up points against a Penn State defense that gave up nearly 300 passing yards to the Mountaineers. This means the Nittany Lions, and McSorley in particular, will need to jump out to an early start to avoid falling into a hole. 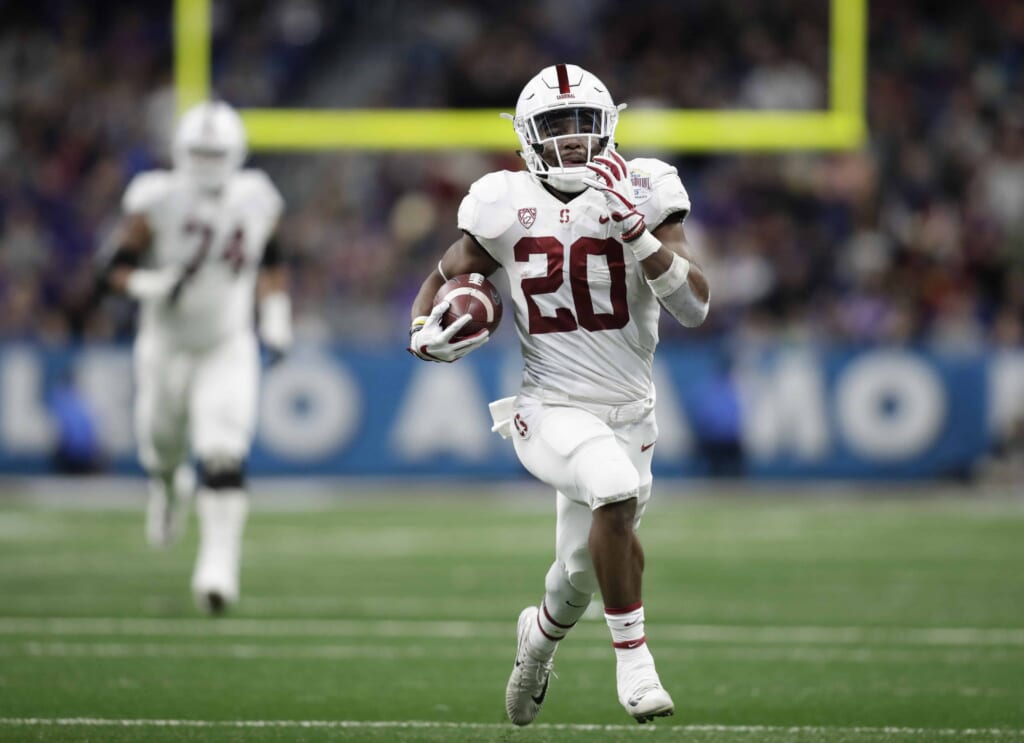 This annual Pac-12 battle always carries some big implications, and though it’s happening so early this season there’s certainly no diminishing the ripple effect. Both teams are vying to win the conference with strong overall rosters. Right now, just based on the fact that Stanford has more experience on offense and that the Cardinal are at home this weekend, we’ll give the edge to Bryce Love and Co.

Speaking of Love, he was almost invisible last weekend against San Diego State. If the Heisman hopeful has any hope of getting back into that race he needs to break out with a monster game against the Trojans.

On the USC side of things, it’s going to be fascinating to see if true freshman JT Daniels can hold it together in his first huge test as the leader of the Trojans’ offense. Just as important, however, is the play of USC’s defense. It needs to not only keep Love in check but provide more resistance than the Aztecs did against K.J. Costello, JJ Arcega-Whiteside and Co.

The Spartans were one of the most pleasant surprises last year, winning 10 games and capping off their season with a blowout over Washington State in the Holiday Bowl. With that in mind, it wasn’t really all that surprising to see them ranked No. 11 in the preseason poll.

Then came Week 1, and with it some stark reality. The Spartans nearly lost at home to Utah State, which forced Brian Lewerke into two turnovers and did an admirable job bottling up LJ Scott on the ground.

Now they’re heading to the Arizona desert for a Pac-12 After Dark special against the Sun Devils. The game starts at 10:45 p.m. ET, so from a body-clock standpoint this will be extremely challenging for Michigan State. Combined with the team’s lackluster opening, the outcome is very much in doubt.

Many of the top Heisman contenders have a chance to really pad their stats in college football Week 2.

Jonathan Taylor will be going up against New Mexico, which gave up 244 yards and three touchdowns on the ground to Incarnate Word in Week 1. Will Grier and the Mountaineers will be facing off against Youngstown State. Tua Tagovailoa and the Crimson Tide are hosting Arkansas State. Justin Herbert has Portland State.

The defensive contenders, Nick Bosa and Ed Oliver, are both in positions to shine in Week 2, the latter going against Arizona, which has Heisman hopeful Khalil Tate under center.

All these players, and many others, are going to have excellent opportunities to put up big-time numbers this weekend.

Will any huge underdogs pull off a legendary upset?

With so many top schools going up against so-called cupcakes in college football Week 2, we have to wonder if one of them will succumb to the rare legendary upset.

Last year, we witnessed Texas falling to Maryland in Week 1 (a feat the Terps pulled off again last weekend at home against Tom Herman’s Longhorns. Troy, of all teams, took down the mighty LSU Tigers in a game that had us on the edge of our seats until the very end. Iowa State defeated Oklahoma, Arizona State knocked off Washington, Iowa did the same to Ohio State, and Pitt took it to Miami.

So, will we once again get to witness the greatest thing college football has to offer in Week 2? We sure hope so.