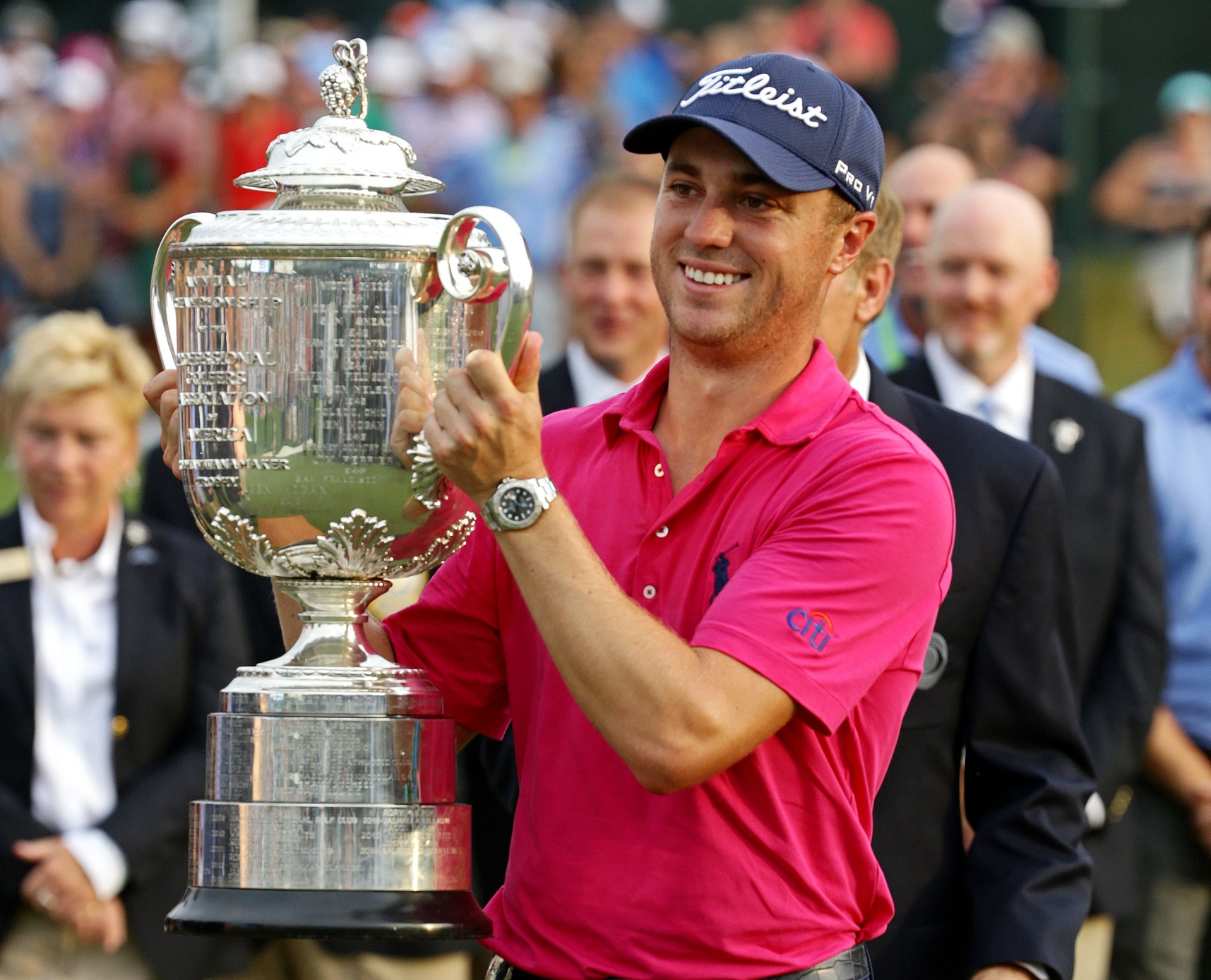 With the conclusion of the 2017 PGA Championship, the season’s major schedule is now complete. What do we takeaway from the week at Quail Hollow?

Obviously, Justin Thomas’ first major win is a main takeaway, but what else should we draw from the season’s final major? What do we make of the disappointing weeks from Rory McIlroy, Dustin Johnson and Jordan Spieth? How damaging might Phil Mickelson’s missed cut end up being? What should we take away from the close calls posted by highly ranked golfers like Rickie Fowler and Hideki Matsuyama?

We’ll look at all that and more as we dissect the major takeaways from the 2017 PGA Championship.

We can take Thomas’ name of the list of great golfers to have never won a tournament. Thomas made a fortunate birdie on 10, a brilliant chip-in birdie on 13 and an exclamation point birdie on 17 to secure the tournament. That made a bogey on 18 rather meaningless. This is Thomas’ third win of 2017 and fourth since October of 2016. He didn’t just win his first major at Quail Hollow. Thomas put himself right there with Dustin Johnson and Jordan Spieth in the Player of the Year discussion.

We’ve all seen “Back to the Future,” so we understand that changing one minor event could change everything that happened afterwards. So, we can’t say that if Rickie Fowler would have won if he had played 16-18 at even par. But he played The Green Mile on Saturday at four-over. If he had played those three holes at even par and everything else afterwards went the same, he would have finished at nine-under, which would have won. We know that Fowler can contend in majors. Now it’s time for him to win. This was another great opportunity that he couldn’t take advantage of.

3. Jason Day goes off the map, out of contention

Day wasn’t much of a factor on Sunday. But what he did on Saturday will be talked about for a while. Day hit an abysmal drive on the 18th hole in the third round, putting himself in jail. Had he decided to punch out, Day likely would have hit his next shot onto the green, two-putted for bogey, and entered Sunday four back. Instead, he attempted a shot that was, by all appearances, impossible. That led to a quadruple-bogey and for all intents and purposes, knocked him out of contention. It was thing that you’ll see in “Tin Cup,” but not what you’d expect from Jason Day.

4. Rory McIlroy disappoints at venue of past triumphs The 2017 PGA Championship appeared to be a great chance for McIlroy to put a positive stamp on an up-and-down season. After struggling for a good portion of the year, McIlroy played well in the weeks leading up to Quail Hollow, a venue where he’s won twice and holds the course record. Instead, McIlroy was not much more than an afterthought and never made his presence felt at the top of the leaderboard. Heading in to the week, that result was far from predictable.

At one point during Sunday’s round, Matsuyama held the lead. But the back nine on ate Matsuyama’s lunch. Matsuyama is one of the best golfers in the world. There isn’t much doubt that at some point, he’ll win a major. But Matsuyama had his first realistic chance to win a major and didn’t play particularly well down the stretch, making five bogeys on the back nine. For Masuyama’s sake, let’s hope that this was nothing but a learning experience.

6. Chris Stroud goes from last man in to week to remember

Stroud didn’t play particularly well on Sunday, especially down the stretch. But unlike guys like Matsuyama and Fowler, he wasn’t much of a story coming in. In fact, Stroud was literally the last man in the tournament. He didn’t lock up a spot until winning the previous week’s Barracuda Championship. To go from that to contention is really quite a week. If nothing else, Stroud secured a spot into next year’s PGA Championship with his performance at Quail Hollow. That’s not a bad consolation prize.

Before a ball was ever struck at Quail Hollow, the PGA made big news, announcing that following 2018, the PGA Championship will be held in May. We don’t know what kind of an impact it will make, and truthfully, it won’t be the same from year to year. In some parts of the country, May and August have similar climates. In other parts, one month may be harder than the other. But after decades of the majors being played in their current order, the change will certainly take some getting used to.

Heading into Sunday, it was likely that the PGA Championship would produce another first-time major winner. Oosthuizen, winner of the 2010 Open Championship, was the man who could put a wrinkle in that. Obviously that didn’t happen, but with a tie for second place Oosthuizen did something else. He’s now recorded a runner-up finish at each of the four majors. Not many people can say that. For the first time since 1995, Mickelson failed to qualify for the weekend at the PGA Championship. This is the second of three tournaments where Mickelson failed to make the cut, and the other was the WGC – Bridgestone Invitational, an event without a cut and where Lefty was not competitive. Mickelson is currently on the outside looking in of the American Presidents Cup team. He’d certainly be an option for a captain’s pick, but as those spots frequently go to hot golfers, Mickelson will have a lot to prove in the FedEx Cup Playoffs.

While he has two wins, Kisner didn’t have the resume as some of the men he was competing with. He also didn’t have a particularly sharp Sunday after finishing the first three days with at least a share of the lead. But Kisner hung tough, giving himself an outside shot at tying Thomas over the last few holes. If you had offered him that at the beginning of the week, he would have been hard pressed to turn it down. A final-hole double bogey knocked Kisner down the board a little, but he made quite a name for himself, even without his best game.

While he finished on a good note, Johnson never contended at Quail Hollow. Really, we can’t just look at the PGA Championship. In general, this was a disappointing major season for the man who won three tournaments before the Masters. An unfortunate accident at his rental home caused him to withdraw at Augusta, and he wasn’t a factor at the U.S. Open, The Open Championship or the PGA Championship. Yes, he won multiple times and earned the No. 1 ranking. The season certainly had its great moments. But in the majors, we certainly expected more.

Generally speaking, major championships that are played at sites of regular tour stops will produce similar leaderboards. But this tournament was not kind to some of Quail Hollow’s past champions. Fowler was the only past champ to finish in the top 10, with some big name guys like McIlroy, J.B. Holmes and James Hahn never really making their presence felt. Obviously the changes that have happened since the 2016 Wells Fargo Championship made a significant difference.

13. Patrick Reed shows he can compete at majors While Reed has won on tour and has been a Ryder Cup star, major championships have never really been his thing. Ahead of this week, he had never finished better than tied for 13th at golf’s greatest events. But Reed made himself a factor down the stretch on Sunday, playing the back nine at two-under par. Of course, with great power comes great responsibility. Heading into 2018’s majors, Reed will not be flying under anyone’s radar like he did this week.

Molinari entered the week as the No. 21-ranked golfer in the world. So, to say that he came from nowhere would be a stretch. But Molinari had never finished better than tied for ninth at any major (2013 Open Championship) and had never topped a T-10 at the PGA Championship (2009). He was excellent at Quail Hollow, though, giving the leaders something to think about in the final holes. Molinari’s performance goes to show how deep the competition is on a week in and week out basis, especially in majors.

Sieth has now made the cut in 12 straight majors. That’s far from easy, so from that respect he should be commended. But his first bid to win the career Grand Slam didn’t go according to plan. Spieth was one-over in the opening round and never got it going after. Of the five men to win the career slam, Tiger Woods remains the only to win the fourth on his first attempt after winning the third. Spieth’s bid to join Gene Sarazen, Ben Hogan, Jack Nicklaus, Gary Player and Woods will come at next year’s PGA at Bellerive Country Club in St. Louis.