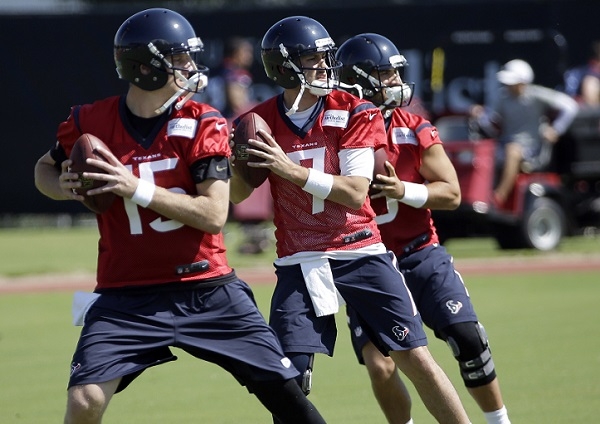 After Saturday’s preseason game against the Denver Broncos, the Houston Texans quarterback situation looks like a nightmare.

If forced to name a starting quarterback between Ryan Mallett and Brian Hoyer after how terribly each one performed, head coach Bill O’Brien would likely answer “none of the above.”

While Mallett, who started for the Texans, completed five of seven passes, he totaled a skimpy 23 yards and could not manage any deep passes. He was almost intercepted by Broncos linebacker Brandon Marshall on a very short throw. Needless to say, he got nowhere near to scoring a touchdown and struggled to move the chains.

Hoyer stepped into the game next and completed only seven of 11 passes for just 52 yards. He was sacked twice in the process and Houston remained scoreless. Between Mallett and Hoyer, they only managed a total of six first downs in the first half.

Houston’s first score came in the second half of the game with the held of third-string quarterback Tom Savage, who managed to lead the Texans into field goal range.

With only two more weeks to assemble some sort cohesion on offense, the short-term outlook (minus Arian Foster) looks terribly depressing for the Texans.

Unimpressive night for Ryan Mallett, can't say he did enough to unseat Brian Hoyer at this point.

The final two preseason games the Texans will play are on the road against the Dallas Cowboys and New Orleans Saints. From the sounds of the dreary quarterback situation, O’Brien is going to have to make his choice for a starter based on the lesser of two evils at this point.

If worst comes to worst, the Texans could always reach out to Michael Vick, who is still waiting for a phone call.