With the 2015 NFL draft quickly approaching, teams are making final preparations for the three-day event in Chicago.

It’s been a long process for front offices around the league, but it’s a process that everyone is hoping works to their advantage moving forward.

In the AFC East, it’s all about catching the defending Super Bowl champion New England Patriots. In this, all three teams in the division behind New England have improved thus far this offseason. This is their final chance to bridge that gap even further before teams focus on preparing for the 2015 season itself.

Here is our preview of the 2015 NFL draft through the lens of the AFC East.

Without a first-round pick due to the Sammy Watkins trade, Buffalo is going to look to fill out its depth chart and add a starter or two in the mid rounds. With their first selection coming at 50, the Bills can just sit back and check out how their board plays out leading to the middle of the second round.

Most of the focus early on will be whether Buffalo is going to select one of the second-tier quarterbacks at 50. Both Brett Hundley and Bryce Petty could be available at that selection.

If Buffalo decides to look in another direction for a more immediate producer, linebacker has to be a position of need. As of right now, the Bills would be sending out Nigel Bradham, Ty Powell and Randell Johnson as their three starting linebackers. No matter the elite talent Buffalo has upfront and in the secondary, that’s a less-than-ideal scenario. The biggest need along this unit likely comes at middle linebacker. In this, Buffalo should hope that Clemson’s Stephone Anthony or Miami’s Denzel Perryman are available. Either could start out of the gate.

In terms of depth needs, Buffalo could stand to add another defensive end behind the bookends that are Mario Williams and Jerry Hughes. It will also likely look for a backup behind the Williams “brothers” at safety. 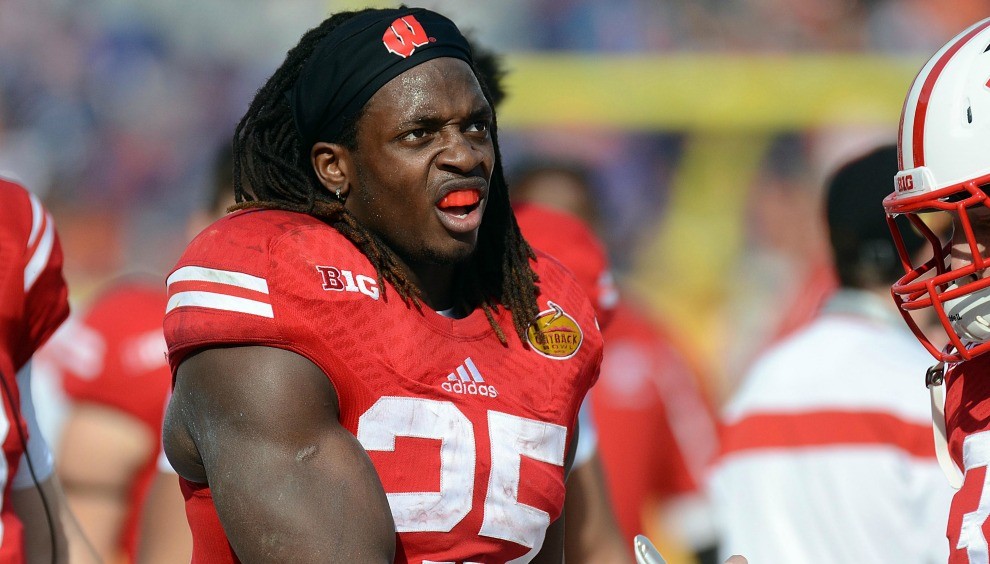 Courtesy of USA Today Sports: Could the Dolphins add a RB in the first?

When looking at Miami’s roster, one position stands out more than the rest. They may seem confident in Lamar Miller shouldering the load at running back, but he has yet to prove that he can be the guy in the backfield to put up 300-plus attempts. Last season saw Miller put up almost 1,100 yards and over five yards per touch. Those are some solid numbers. However, the idea of being able to add a generational talent like Georgia’s Todd Gurley or Wisconsin’s Melvin Gordon might be too hard to pass up.

While some mocks have the Dolphins going running back, the likelier scenario at 14 has to be wide receiver. We already know Miami is interested in potentially moving up into the top 10 to acquire one of the top three receivers in the class. It could gamble without a trade up and see if someone like Louisville’s DeVante Parker is available. That would pretty much be the ideal scenario for this team. If not, one of the second-tier receivers could be an option.

Defensively, there aren’t many needs here. The addition of prized free agent Ndamukong Suh calms some nerves in the defensive front. He will now be teaming up with Cameron Wake to form an elite 1-2 punch. The team’s secondary also seems to be set with a combination of experienced veterans and talented youngsters. It will be interesting to see how Will Davis and Jamar Taylor perform with potentially larger roles now that Cortland Finnegan retired.

This leaves linebacker as a position of need for the Dolphins. Chris McCain is slated to start at the strong-side next to Koa Misi and a talented Jelani Jenkins. If the Dolphins could pick up a Shaq Thompson or Eric Kendricks, I don’t think many people would complain in South Beach. That would fortify the team’s defense big time.

The Patriots are in an odd situation for the defending champs. They actually have a nice amount of holes on both sides of the ball. Who is going to start at running back with both Stevan Ridley and Shane Vereen gone? Can they contend another season without a true top-end receiver? Who replaces Brandon Browner and Darrelle Revis at cornerback?

While all of these questions won’t be answered in the upcoming draft, the Patriots need to make a dent and fill some major holes. That’s where the 32nd pick is valuable. Much like what the Seattle Seahawks did last year, New England could very well trade out of the first round in order to add a couple more picks. This would enable them to reassess their big board entering Day 2, while likely still picking at the top of the second round.

Names linked to New England early in the draft include: Connecticut cornerback Byron Jones and even one of the top two running backs in the class. Either position is one of utmost need, but I have the feeling that the Patriots would be doing cartwheels if either Gordon or Gurley were available at 32. If not, New England could very well go with Jones in the first round and add a second-tier running back in Day 2. Miami’s Duke Johnson seems to be a solid fit.

Marcus Mariota. Are we done here?

Seriously, the Jets are setting everything up for a potential trade up to nab the reigning Heisman winner. Heck, the team has even indicated that it’s calling those picking ahead of it in the top 10 to gauge interest. With Geno Smith and Ryan Fitzpatrick as the Jets only two in-house candidates to start, it makes sense that they would be in the market to land Mariota.

Outside of quarterback, there are plenty of holes for first-year head coach Todd Bowles to fill here. Running back has to be in consideration in the second round. The Jets could even potentially look to move back into the first round to nab one of the top two ball carriers in the draft. After all, the likes of Bilal Powell and Chris Ivory aren’t scaring anyone.

The good news for Jets fans is that their defense appears to be set. After adding Darrelle Revis, Antonio Cromartie, Buster Skrine and Marcus Gilchrist to a previously talent-stricken secondary, the back end of this defense is set. Now take into account one of the best defensive fronts, and the Jets are more than likely going to go offense-heavy in the draft. Imagine that.