We previously checked in on the five-best picks from the 2010 NFL draft and had NaVorro Bowman of the San Francsico 49ers heading that list. Now, the five-worst picks.

While the head man here at Sportsnaut might not have agreed with my assessment there, no real argument can be made that the five players featured in that piece weren’t deserving of it. This might get a tad more controversial, as we look at the five-worst picks in our review of the 2010 NFL Draft Class five years after the fact.

Much like in the other piece, the focus here will be on where specific players were taken in comparison to others. While someone like Taylor Mays may have been a bad pick for the San Francisco 49ers in the second round, the hit they took by selecting him was nowhere near as great as some of the teams who took busts in the top 10. 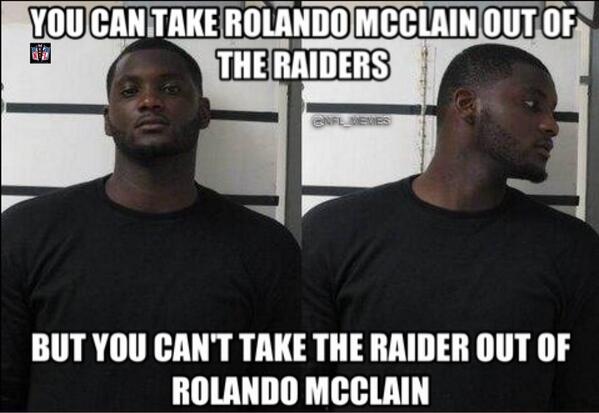 Prior to what has to be considered strange off-field incidents for the now out-of-football McClain, he was missing tackles and taking bad angles for the Oakland Raiders, who made him the eighth overall pick in the 2010 NFL draft. The former Alabama standout and now infamous goofy arrest picture taker (or poser).

Not sure where to go with that.

Okay, back to my original point. He was taken immediately ahead of C.J. Spiller, Anthony Davis, Earl Thomas and Jason Pierre-Paul. Heck, the likes of NaVorro Bowman and Daryl Washington, at inside linebacker, were selected many picks after Al Davis and Co. took this character. McClain was released prior to last season and caught on with the Baltimore Ravens. He was then arrested once again before ultimately deciding that he needed to get his life together. McClain retired shortly thereafter and is currently attempting to get his degree at the University of Alabama. All jokes aside, we hope it works out for him. Nothing more depressing than seeing a talented individual throw his life away because of idiocy.

When all was said and done, McClain takes the cake as the worst in our 2010 NFL Draft Class Review: Five-Worst Picks

I really wanted to refrain from putting Tebow on this list, but alas I couldn’t. Whether it’s due to fault of his own or a combination of shoddy decision making in Denver remains to be scene, but Tebow lasted a total of 14 regular season starts with the Broncos before being traded to the New York Jets prior to the 2013 season. He did win eight of those 14 starts and tallied 29 total touchdowns compared to nine interceptions.

However, Tebow averaged 151 passing yards per game and completed under 48 percent of his passes with the Broncos before they moved in another direction with Peyton Manning. Once with the Jets, as nothing more than a sideshow, Tebow attempted a total of eight passes and saw more action at wide receiver than quarterback. He was released by New York last offseason and then picked up by the New England patriots, who cut him lose in training camp last summer. Tebow is now an analyst on ESPN and has likely seen his football career come to an end.

No matter which way you look at it, this was a wasted draft pick. Denver yielded a second, third and fourth to the Baltimore Ravens in order to move back into the first round to select Tebow. The likes of Daryl Washington, Emmanuel Sanders and Dennis Pitta were available with each of those original selections.

Now what a crappy group of LBs we have here.

Ask Eagles’ fans who is to blame for Graham’s lack of success in the NFL and they will point to a defensive scheme and coaching staff that has refused to utilize the talents that made him a high-round pick. Basically a 3-4 outside linebacker by trade, Graham has been forced to play with his hands down at defensive end for the Eagles throughout the vast majority of his career there.  He’s responded by starting just 12 games and recording 11.5 total sacks in four seasons.

What really gets my goat here is that Philadelphia traded up from the No. 24 overall spot in the first round, a pick used on current Dallas Cowboys wide receiver Dez Bryant, in order to pick Graham. It also yielded two third-round picks to the Denver Broncos in the deal. These picks were used on Eric Decker and Ed Dickson. That’s about as bad as you can get, guys and gals. Because of this horrendous trade, Howie Roseman and Andy Reid are fixtures in our 2010 NFL Draft Class Review: Five-Worst Picks. 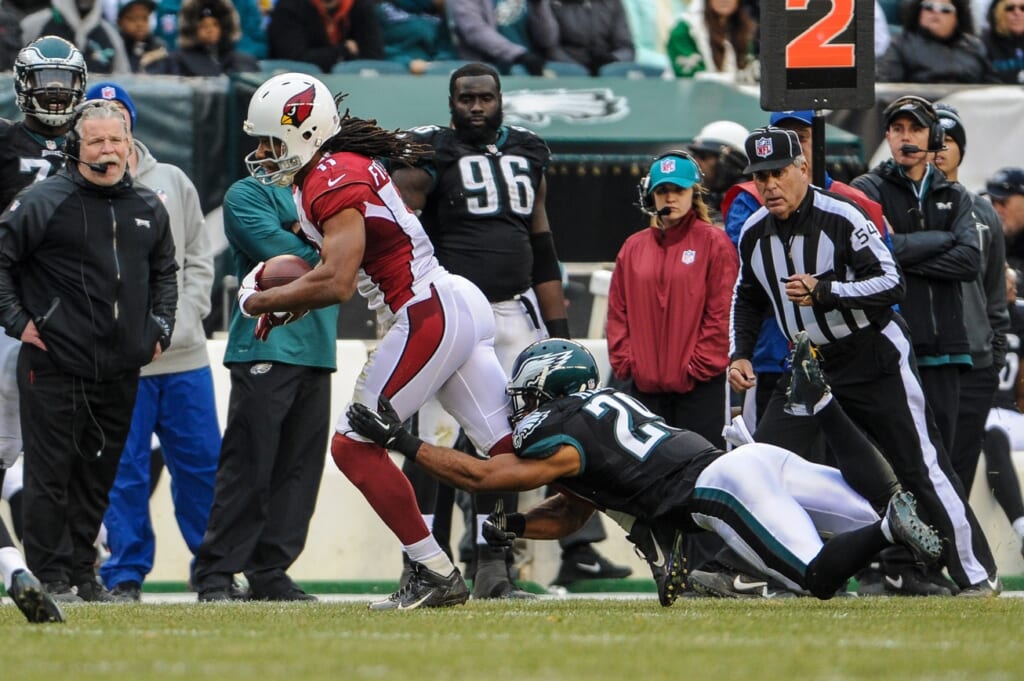 Not to jump all over the Eagles here because I was a huge Allen fan back in 2010, but this was yet another wasted pick. The Eagles received a second and fourth rounder for Donovan McNabb prior to the 2010 draft…a pretty good bounty for someone that many considered to be washed up at that point. In an attempt to rebuild a horrendous secondary (sound familiar?) Philadelphia picked up this South Florida kid.

Issue here is who was taken immediately after Allen in the second round of the draft that April. It’s not good, Eagles fans. 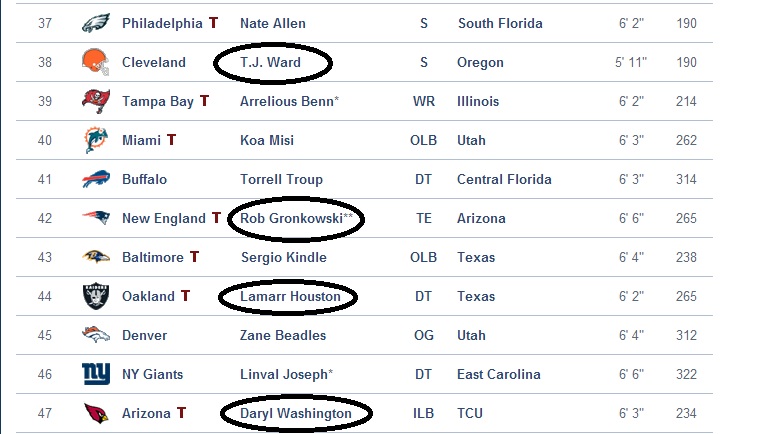 Hindsight is 20/20 and it’s hard to correlate missed picks at one position with steals at another position, but T.J. Ward went immediately after Allen there. That’s not good for anyone involved, well outside of the Cleveland Browns.

Allen has started 54 games in three seasons, but that’s simply because the Eagles haven’t had much of a choice outside of throwing him out there. Allen improved a little bit this year, but still put up negative overall grades according to Pro Football Focus (subscription required). In 2012, he was their 84th-ranked safety out of 88 overall players at that position.

It appears as though Indy gave up on Hughes too soon.

Hughes was considered an elite pass-rush threat leading up to the 2010 NFL draft. He had the size and athleticism to be a dominating force for the Colts early in his career. The issue here is that Indy played him out of position in its 4-3 scheme, something we noticed with Bjoern Werner as a rookie last season. Once Hughes was sent packing to Buffalo and played in his more natural position, he put up 10 sacks and played stellar football. This is the far-to-common case of a team selecting based on talent, not fit.

One of the primary reasons Hughes isn’t higher on this list is because the pass rushers that went immediately after him in the draft haven’t done too much either. The likes of Koa Misi and Sergio Kindle aren’t too much to write home about. With that said, someone like Carlos Dunlap (a more natural 4-3 end) would have fit much better here.

There you have it. Your 2010 NFL Draft Class Review: Five-Worst Picks