15 young NFL defenders to pay attention to in training camp

The last couple NFL drafts have brought the league a whole bunch of young talent on the defensive side of the ball. One could easily conclude that both drafts were defense heavy despite seeing quarterbacks go off the board at a rapid clip.

From dominating performers in T.J. Watt and Reuben Foster last year to high-upside first-round picks in this year’s draft class, there’s a whole lot to be excited about.

It’s in this that we check in on 15 young NFL defenders that we must pay attention to in training camp this summer. 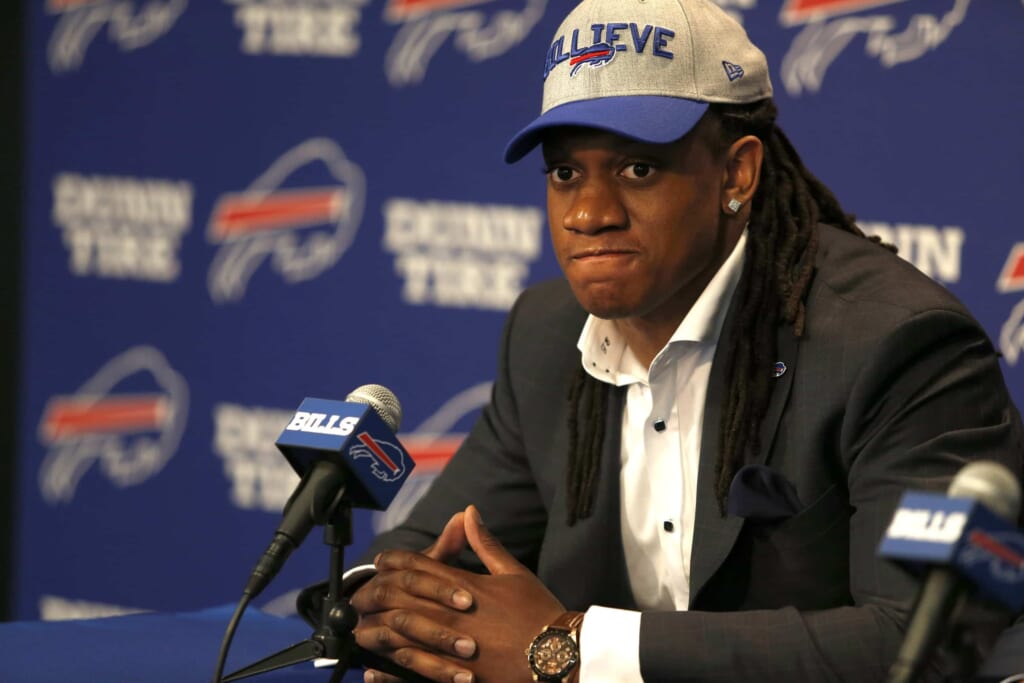 Having exhausted a third-round pick in moving back up in the first round for this former Virginia Tech linebacker back in April, the Bills are certainly expecting a lot from him as a rookie. He’s slated to start right in the middle for a Bills defense that needs more production from its linebacker group.

Edmunds himself is just 20 years old. Being thrust into the starting role without any real competition could be an issue moving forward. With that said, he’s a physical marvel at 6-foot-5 and 250 pounds. That’s man-made stuff right there, and it’s hard to duplicate. We’re really intrigued to see how Edmunds performs during camp.

Lewis will likely take over as the Cowboys’ No. 1 corner as a sophomore this coming season. It’s going to be a different role in that Lewis wasn’t even seen as that guy during a brilliant career at Michigan. But based on what we saw from the former Wolverine as a rookie last season, he’s going to be more than up for it. Lewis recorded 54 tackles, 10 passes defended and one interception in 15 games, starting Dallas’ final seven outings.

With Lewis and fellow 2017 draft pick Chidobe Awuzie slated to start outside and Byron Jones looking more like a nickel guy, this revamped Cowboys secondary should improve leaps and bounds. That’s what happens when you move on from uninspiring veterans to hungry youngsters. 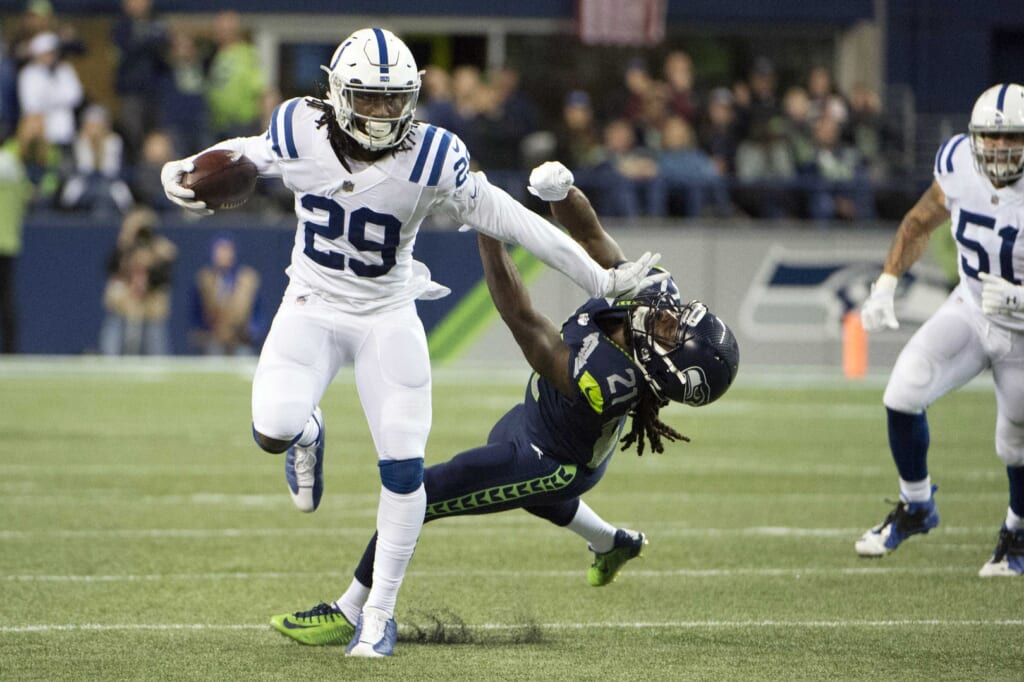 Unfortunately, an otherwise splendid rookie campaign was cut short for this former first-round pick after he suffered a torn ACL and MCL seven games in. Up to that point, Hooker was making noise as a Defensive Rookie of the Year candidate. All told, the former Ohio State standout recorded 21 tackles, four passes defended and three interceptions.

In the mold of the Earl Thomas’ of the world as a true center fielder at safety, Hooker’s presence will be felt big time moving forward. He’s a game-changer in the secondary, one that should be fully ready to go during camp. It’s going to be intriguing to see Hooker and fellow young defensive back Quincy Wilson grow into their roles with the Colts this summer.

Selected eighth overall in April’s draft, Smith is already slated to be the Bears’ starting left inside linebacker. That could very well mean him calling the plays immediately out of the gate. Normally, this is the type of role that a rookie linebacker would struggle with. But this Georgia product isn’t your average rookie. He’s already a dominant force on the gridiron, one that could change the entire dynamic of Chicago’s defense from Day 1.

An under-the-radar Heisman candidate in 2017, Smith finished up his final season with the Bulldogs having recorded 137 tackles (14 for loss) and 6.5 sacks. This came against elite-level SEC competition. Having not initially reported to camp due to a contract stalemate, Smith’s emergence could be set back a bit. But in no way does that mean he won’t start Week 1. If so, look for immediate production from the backer.

It’s an unfortunate situation to look at. Having been selected in the second round of last year’s draft, McMillan was expected to start on the inside for Miami as a rookie. Then, came the torn ACL this former Ohio State standout suffered in his first ever preseason game with the Dolphins. As much as this set back McMillan’s progression, the Dolphins themselves were impacted even more. Without his ability on the inside, Miami ranked in the middle of the pack in total defense.

The good news here is that McMillan is fully recovered from said injury and ready to make an impact out of the gate as a redshirt freshman. The brass in South Beach already views him as a legit veteran due to a combination of on-field smarts and his skill set. Teaming up with rookie linebacker Jerome Baker, the Dolphins have themselves a nice young duo here. 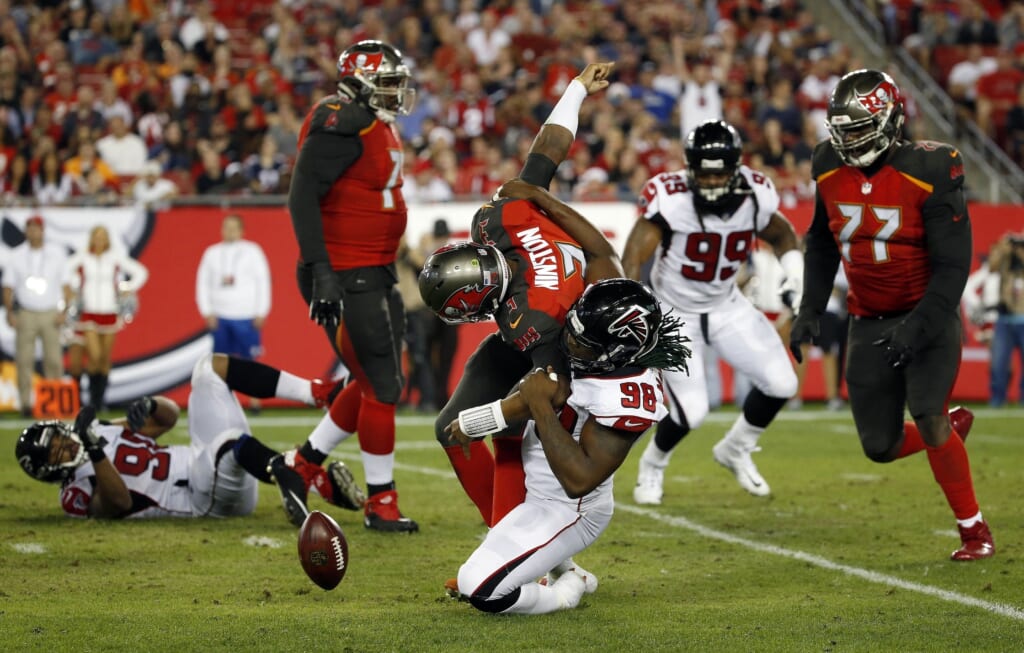 Atlanta boasts the ability to field one of the best young pass-rushing tandems in the NFC. Of course, that starts with an All-Pro in Vic Beasley who recorded a whopping 15.5 sacks as a sophomore back in 2016. In no way does this mean we can sleep on McKinley. As a rookie last season, the former first-round pick from UCLA recorded six sacks in a part-time role.

As Pro Football Focus noted, he was the most efficient rookie from a pass-rush standpoint last season. Now slated to take on a larger role as a second-year player, it’s going to be fun to see Takk grow into his new role. That starts during summer camp.

Denver didn’t pick Chubb up at No. 5 overall in April’s draft to have him take on anything less than a three-down role as a rookie. Seen by many as the top overall player in the draft class, the Broncos were taken aback when this North Carolina State product dropped to them. At 6-foot-4 and 269 pounds, Chubb is a physical marvel. He also made opposing offensive linemen look absolutely silly in college.

Set to team up with former Super Bowl MVP Von Miller, the expectation here is that Chubb will contend for Defensive Rookie of the Year honors. How do the Broncos envision Chubb? Well, former star DeMarcus Ware — having worked with the Broncos this spring — couldn’t have lobbed more praise in the direction of the rookie. It’s going to be a whole lot of fun in Mile High with these two stars teaming up together. 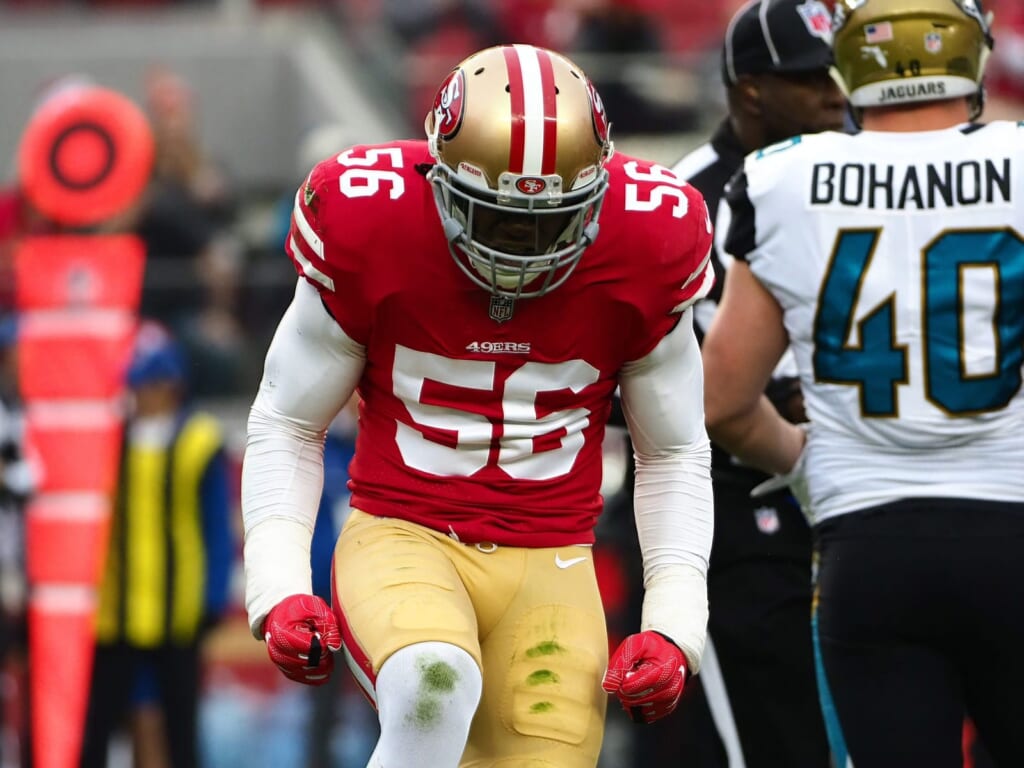 Foster’s legal problems this offseason far overshadowed the brilliant on-field performance he put up as a rookie last season. Now that said legal problems have been resolved and Foster is suspended for the first two games of the season, we can finally focus on him as an actual football player.

In the mold of NaVorro Bowman and Patrick Willis before him, this former Alabama standout has a real opportunity to make his name known this coming season. He’ll be the play caller for what promises to be a vastly improved San Francisco defense. After earning NFL Defensive Rookie of the Month in November, the expectation is that Foster will now take his game to a new level. He’s legitimately a future Defensive Player of the Year candidate in waiting.

Carlos Dunlap and Geno Atkins might very well get the most play on Cincinnati’s defense, but this second-year player is going to make waves in 2018. A fourth-round pick out of Auburn last year, Lawson recorded 8.5 sacks as a pass-rush specialist during his rookie campaign. He’s now slated to take on a three-down role, which should lead to even more production from the youngster.

In addition to his high sack numbers in 2017, Lawson put up more quarterback pressures as any other rookie. That’s certainly a sign he’s ready to take his game to the next level in 2018. It’s going to be fun to watch him do his thing during camp and the preseason.

Reddick is an interesting case study in that he moved from being primarily an edge guy at Temple to playing strong side for the Cardinals as a rookie. A late bloomer of sorts during his college career, the transition went about as smoothly as we would have expected. The former first-round pick tallied 32 tackles, 2.5 sacks and two forced fumbles in limited action as a rookie.

Now, entering his second season, Arizona’s brass is expecting a whole heck of a lot from Reddick. Now that he’s through that initial learning curve after some struggles, we’re looking for the youngster to take the next step on a revamped Cardinals defense. It should be fun. 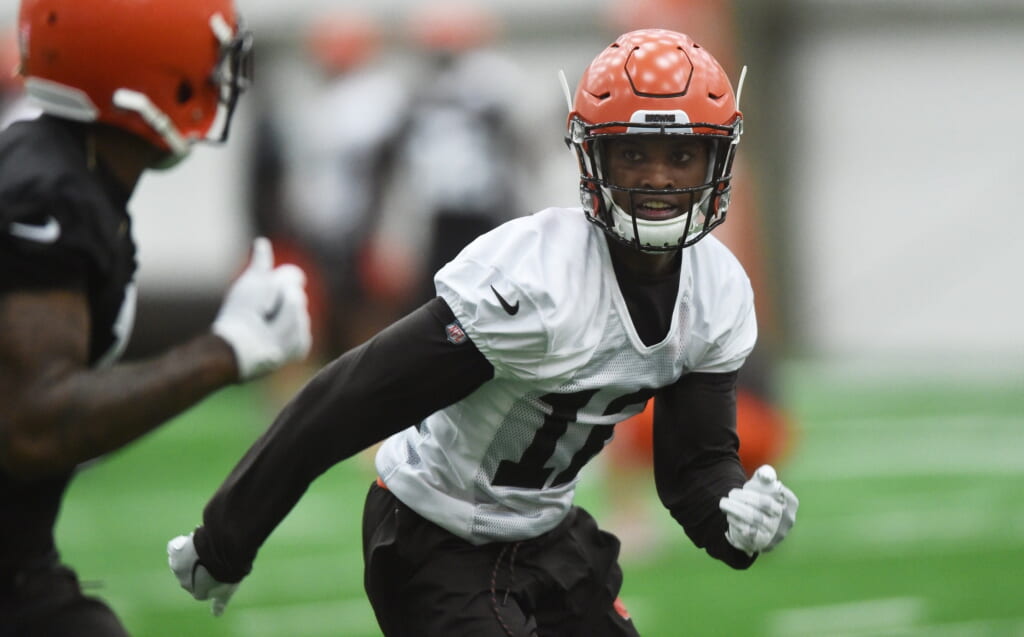 When Cleveland made Ward a surprising top-five pick in April’s draft, it became readily apparent that the team was expecting a whole lot out of the Ohio State product immediately. It’s the highest a corner has been selected in a draft since the great Charles Woodson back in 1998. No pressure here.

Despite loading up on veteran corners with E.J. Gaines, Travis Carrie and Terrance Mitchell, expectations for Ward have not simmered since the draft. Ward might boast minimal starting experience after seeing action in that role in Columbus for just one season. But he has the size (5-foot-11 and 190 pounds) and physicality to make a major impact. We’re intrigued to see how he performs against the likes of Josh Gordon and Jarvis Landry in camp.

If it weren’t for the otherworldly performance of Marshon Lattimore in New Orleans, Watt would have received much more play for the NFL’s Defensive Rookie of the Year honor. From the get in preseason, this former first-round pick was about as dominant of a rookie pass rusher as we have seen in years. When all was said and done, the youngest Watt brother recorded 52 tackles, seven passes defended, seven sacks, one forced fumble and one interception en route to a brilliant rookie campaign.

Now that Watt has a full offseason of workouts under his belt in Pittsburgh, we’re expecting him to take that next step to All-Pro status. Given the way Mike Tomlin works his players during camp, how Watt performs against the Steelers’ first-team offense will be telling.

As the first round of the 2017 NFL Draft was playing out, experts around the football world were shocked that Allen dropped out of the top 10. Once he landed to the Redskins at 17th overall, it seemed to be a perfect fit. This is a squad that had struggled greatly against the run in recent seasons. A 6-foot-3, 293-pound mountain of a man, Allen would certainly change that. It never came to fruition. The Alabama product struggled through an injury-plagued rookie campaign that saw him miss all but five games.

Now seemingly fully healthy, Allen has an opportunity this summer to prove naysayers wrong. He’ll be teaming up with former Bama teammate and 2018 first-round pick Da’Ron Payne to form a solid young duo along the Skins’ defensive line. It should be fun to see the two grow and help Washington overcome a dead last ranking against the run last season. 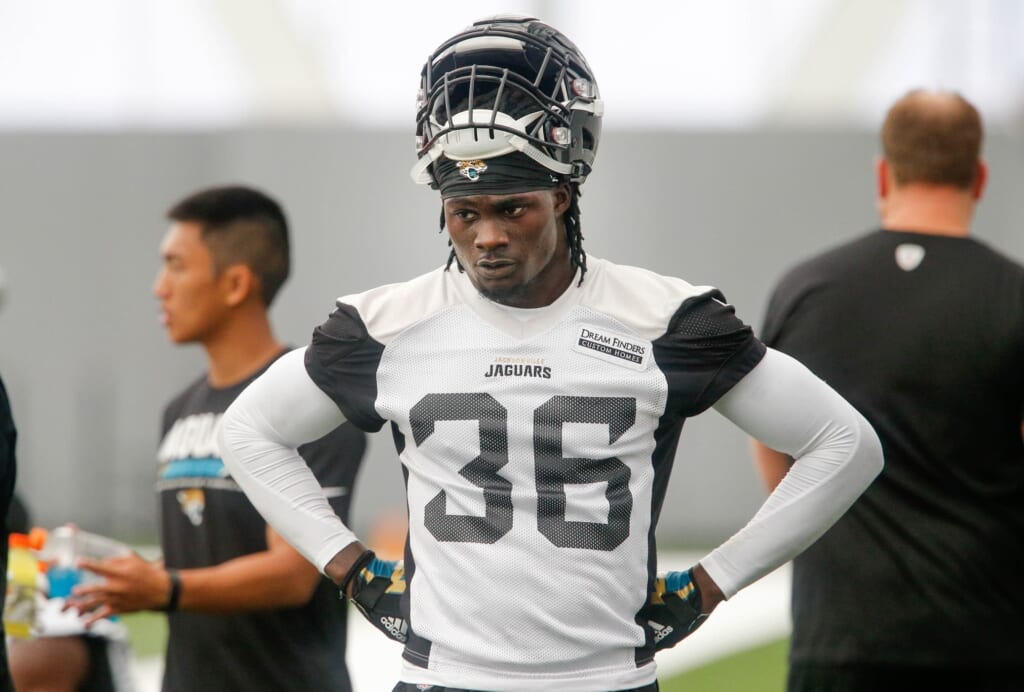 The strong just continue to get stronger. In no world should this 6-foot-3 bulldozer of a safety have fallen all the way to the third round of April’s draft. A true in-the-box safety, Harrison fits everything that Jacksonville looks for in that position. Almost immediately, he should challenge either Barry Church or Tashaun Gipson for one of the starting safety jobs as a rookie.

We’re looking more at Harrison playing strong safety, but he can also work as a center fielder with the talent Jacksonville has at corner. In any event, Harrison’s first training camp should be filled with intrigue.

Potentially the most confident defensive back to enter the NFL since Jalen Ramsey, Alexander goes against what Green Bay had valued in corners under former general manager Ted Thompson. He’s under 6-foot and isn’t going to body up to bigger receivers. That’s fine. Alexander already boasts plus-level technique on the outside and is more physical than his frame might suggest.

We’re expecting Green Bay to throw both Alexander and fellow 2018 draft pick Josh Jackson to the wolves during camp. Taking on Aaron Rodgers and Co., it’s going to be a tremendous first test for the two. And it’s going to be an absolute blast.