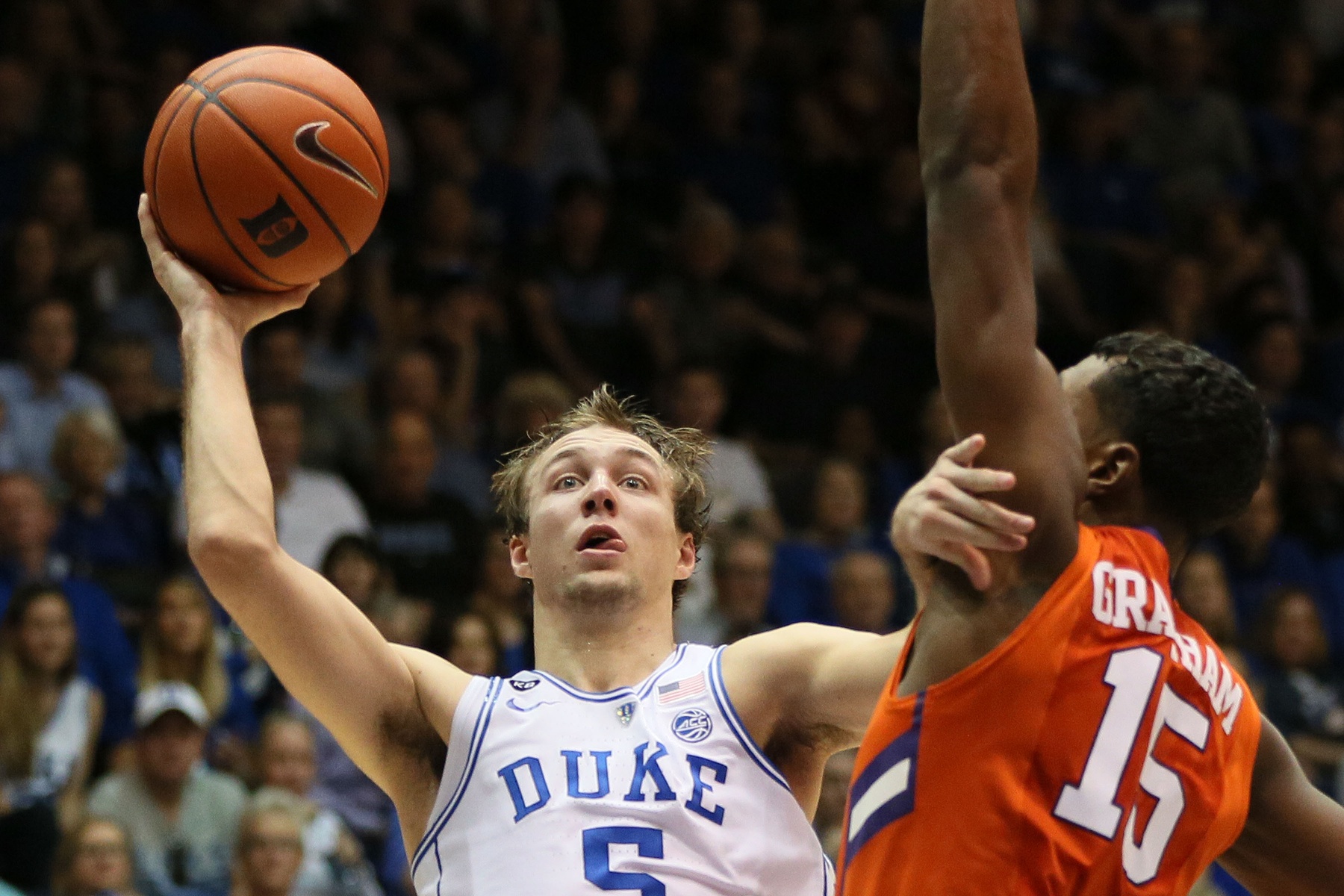 Sam Bowie. Darko Milicic. Greg Oden. Anthony Bennett. You probably recognize the names as prominent among the NBA’s graveyard of draft busts. There’s simply no avoiding the fact that some players in a given draft won’t work out. No matter how good the talent pool — and in this particular draft, the talent pool happens to be near the top of the charts — some players simply won’t succeed at the next level.

It’s the biggest fear of every NBA executive. And, for many, it’s what puts them out of a job. Nearly every prospect has some negative trait you could seize upon, whether it’s injuries or a flaw in play. Success or failure is usually determined in whether they overcome it. Many do, but some don’t.

This draft, like every other, will have its busts. Here’s who we think they’ll be.

After trading with the Wolves…

The case for Markkanen seemingly comes down to one factor: his shooting. He shot over 42 percent from 3 as a freshman at Arizona last season and will undoubtedly be capable as a stretch four right away in the NBA. But what else can he do?

Rebound? Well, he frequently struggled on the boards in college against bigger players and doesn’t have the physical frame to do things like box out at the NBA level, especially against more traditional power forwards.

Protect the rim? He averaged just 0.5 blocks per game in school and doesn’t have the length to protect the rim.

Defend in the post? He got killed by big guys who could out-physical him on the block.

Defend on the perimeter, off switches? No, in fact, the Chicago Bulls will likely have to hide Markkanen on defense should they get to the postseason in the near future. Teams will likely try to take advantage of him in the pick and roll and will more than likely succeed.

The strength of Markkanen’s game is obvious, but there are simply too many weaknesses for him to survive without serious improvement down the line.

New York! I can't wait to show the greatest city in the world what I've got. Check me out: #WhoDoYouCollect https://t.co/KI7T5sTdrR pic.twitter.com/Fn5AzBuTpQ

The biggest factor in Ntilikina being on this list has nothing to do with him. In fact, whoever the New York Knicks drafted would have made it onto here for the sole reason that they are a franchise of pure incompetence, run by a man in Phil Jackson who has spent the offseason to this point alienating and attempting to trade the team’s two best players while doing his best to cause a fan riot.

Of course, that pales in comparison to owner James Dolan, a rich, spoiled child who has never been told ‘no’ in his life. He spent the night of the NBA Draft performing at City Winery with his band “JD and the Straight Shot”. Don’t worry, it’s hardly the least embarrassing thing he’s done for the franchise in the last year.

The Knicks took Ntilikina because they thought he fit the triangle. Unfortunately for him, the triangle offense usually requires the point guard to feed the ball into the post or take mid-range jumpers. While Ntilikina did play well off the ball in France and is a solid shooter, the triangle simply isn’t an offense in which a point guard will be a superstar.

More than that, the current environment at Madison Square Garden is not one in which a young player is apt to thrive. If Jackson and Dolan were parents, Child Protective Services would have been called long ago.

The first non-freshman college player is off the board.

Luke Kennard to the Pistons at No. 12. pic.twitter.com/jqrUxBzkhw

Detroit Pistons head coach Stan Van Gundy put it best after the draft. When asked about Kennard, whom his team selected 12th overall, the bombastic head coach replied, “He’s got to change his entire defensive approach. He’s got to get a lot better and, quite honestly, he’s got to, in my opinion take a lot more pride in (defense) than he did this past year,” per Detroit Bad Boys.

Like Markkanen, Kennard will immediately help with floor spacing. He shot 43.8 percent from 3 at Duke and has solid ability off the dribble as well. Offensively, he can do enough to hang, and once he develops further he’ll be a solid player on that end.

But when the head coach who drafted you a day earlier is calling out your defense, well, it says something. The effort wasn’t there at Duke and neither were the physical tools to succeed.

Maybe Van Gundy can drill the mental stuff into his head — that was almost certainly his goal here — but it will be tough for Kennard to stay on the floor, especially with a coach that puts a heavy emphasis on defense. Every lapse in concentration will be another point against him and there’s only so many Van Gundy will allow.

Don’t be shocked if Kennard ends up riding the bench for large portions of the year as a result.

The Minnesota Timberwolves completed their draft-night heist of the Chicago Bulls by getting Gar Forman. John Paxson to agree to fork over the 16th pick in the draft, along with Jimmy Butler, for a package that was, in comparison, mediocre. With that pick, they took Patton, who can best be described as meh.

Offensively, it’s tough to see Patton’s immediate impact. He doesn’t have the physical ability to bang down low, nor does he have the shooting ability to play as a stretch five. That doesn’t mean he can’t improve, but the base isn’t particularly encouraging. Perhaps Patton can find success as a pick-and-roll finisher, but that’s largely dependent on strong, physical screen-setting and the ability to finish over players.

Who knows if he can make an offensive identity out of it.

It feels like a broken record to keep saying this about every prospect, but Patton also has serious work to do on the defensive end. NBA centers will box him out easily on the boards, and he isn’t there from a technical standpoint on defense. Tom Thibodeau is one hell of a defensive coach, but there’s only so much he can do. Just ask Zach LaVine and Kris Dunn.

With the 18th pick in the 2017 NBA Draft, your Indiana Pacers select T.J. Leaf from UCLA.#PacersDraft pic.twitter.com/3jAFKEv8Ax

At No. 18 overall, Leaf was an uninspiring choice, solely because it feels like his ceiling is “just another guy.” Especially for the Indiana Pacers, whose slow pace stands in contrast to the style Leaf played at UCLA, it’s hard to see the former Bruin’s ceiling as anything more than a solid bench guy. Stylistically, the Pacers are a tabula rasa (or at least will be after they no longer have Paul George), but Nate McMillan’s principles stand in contrast to those under which Leaf thrived last season.

In all fairness, the floor isn’t particularly low. As unlikely as it is that Leaf will be a star, it feels equally unlikely that he’s out of the league in three years. Maybe bust isn’t the best word to describe his status, but it’s the taxonomy we as basketball fans have chosen, so here we are.

The biggest concern for Leaf, predictably, is defense. But in lieu of ticking off the same concerns as seemingly every other college player, let’s focus on Leaf’s offense, particularly his ability to stretch the floor. On a surface level, this shouldn’t be an issue. Leaf shot 46.6 percent from 3 in college. Case closed, right?

Well, Leaf took only three 3-pointers per game last season, with 84 percent of his shots coming inside the arc, according to DraftExpress, Extend the 3-point line out to NBA range and there may be room for concern, especially given his pedestrian 67 percent free throw rate, a better historical indicator of shooting success at the next level than anything else. The floor may be high with Leaf, but don’t get too excited by the ceiling.

The @trailblazers select Caleb Swanigan with the #26 pick in the 2017 #NBADraft! pic.twitter.com/ubs6nkDq43

Swanigan was born ten years too late. Had this draft taken place in 2007, Swanigan may have been considered a top-10 talent with the ability to hurt teams in the low-post and rebound on both ends of the floor.

Alas, it is 2017, which means few teams would even think of running their offense primarily through the post. While rebounding is still valuable, most coaches prioritize getting back in transition over doing it on the offensive end. To his credit, Swanigan has tried to adjust. He added shooting to his game this year and did just fine, shooting 44.7 percent from beyond the arc on 2.4 3s per game.

However, his ability from outside is limited to that of a spot-up shooter, which is a poor way to take advantage of his skill set. To do that fully, the Portland Trail Blazers would have to give him a bevy of opportunities down low. Having drafted him, head coach Terry Stotts is surely happy to do that, to some extent. But Swanigan isn’t exactly the first option, and even the best post players are inefficient relative to their counterparts on the outside.

And as far as defense goes, rebounding is there, but requisite tasks for centers in today’s game, such as surviving the pick-and-roll blender, are not. He isn’t agile enough to keep up with speedy point guards. Players like Russell Westbrook — with whom he now shares a division — will score at will against him. Non-superstars will find their paths to the basket get easier against Swanigan as well.

If only time travel was possible.