10 times the sports world stopped on a dime 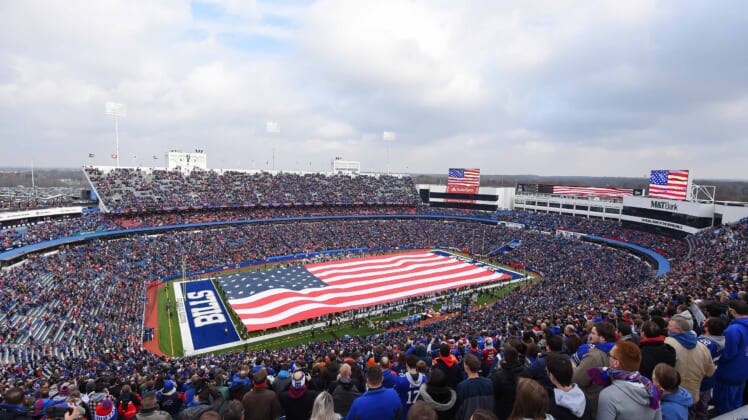 The event of the past few days around the sports world and the United States got us thinking. Since the World Health Organization (WHO) categorized coronavirus (COVID-19) as a pandemic, things have dramatically changed.

Sports are not going on as planned with the United States preparing for further outbreak. There’s no entertainment outlet in the sports world for us to focus on.

Here is a look at 10 moments that brought the sports world to a stop.

It was a surreal time in the United States and around the world. The attacks on Pearl Harbor on Dec. 7, 1941, is a day that lived in infamy. The Japanese attack on the naval station in Hawaii brought America into a war it did not want to get involved in. It also changed the entire dynamic of the baseball world.

A total of 500-plus Major League Baseball players fought in World War II, many of them giving up more than a season in the process. That included future Hall of Famers like Ted Williams, Stan Musial and Joe DiMaggio. At the same time, the All-American Girls Professional Baseball League captivated the nation. It was a continuation of women stepping up and doing jobs that were usually reserved for men during a highly patriarchal time in our history.

Olympics cancelled during both World Wars

Both World Wars came with the cancellation of the Olympics. Nations at war would not do battle in a friendly event that had defined this planet since the days of Nero.

What’s most interesting about this is the performance of African-American track star Jesse Owens, who won gold in front of German leader Adolf Hitler during the 1936 Summer Olympics in Berlin. Owens’ win over Caucasian athletes spit in the face of the Third Reich’s belief of a master race. It was also a prelude to a war that would start three years later and cost the lives of 85 million people.

The United States joined other Western Nations and the Islamic Republic of Iran in boycotting the 1980 Summer Olympics in Russia due to the Soviet Union’s invasion of Afghanistan. Led by then-President Jimmy Carter, the U.S. created a coalition of 60 countries to boycott said Olympics.

The backstories here are interesting in that the very same Afghan militia the United States backed, the Mujahideen, included a soldier by the name of Osama bin Laden (more on him later).

The baseball world has faced nearly unimaginable tragedy in recent years. Though, the death of seven-time New York Yankees All-Star catcher Thurman Munson in a plane accident back in August 1979 is seemingly the most notable. It fractured the Yankees’ organization and the entire baseball world. Munson was just 31 at the time of his death.

More recently, we’ve seen young stars perish long before it should have been their end. The tragic death of then Miami Marlins star Jose Fernandez back in September of 2016 stands above the rest. He was among the best pitchers in the game. Dying at the age of 24 was as tragic as it gets.

Unfortunately, the list does not end there. The Los Angeles Angels have faced this head on over the past decade-plus. Pitcher Nick Adenhart died in a Southern California car accident shortly after Opening Day 2009. Then last year, pitcher Tyler Skaggs died of an overdose while the team was on a road trip in Texas.

A nation and world forever changed. A seemingly beautiful fall Tuesday on the east coast of the United States turning into the nation’s darkest hour. As the NFL prepared for Week 2 and with the MLB season winding down, sports would ultimately become an outlet for this nation.

But before we could move on, the death of nearly 3,000 people in coordinated terrorist attacks in New York City, Washington D.C. and Pennsylvania put everything to a stop. Led by ring leader Osama Bin-Laden, Al-Qaeda flew planes into the hub of America’s financial and military establishment, changing everything as we know it.

For baseball, that meant postponing the season for a week. The NFL would follow suit by postponing Week 2’s slate until January and pushing the Super Bowl to February. As noted, the sports world in general did act as an outlet. President George W. Bush unified the nation in the process.

Many people remember exactly what they were doing when the Twin Towers were attacked. We also remember the backdrop of the sports world bringing us back to some sense of normalcy. It was an era that saw the sports world took center stage during scary times.

To a lesser extent, people will remember where they were on January 26, 2020. When news first broke that all-time Los Angeles Lakers great Kobe Bryant died in a helicopter accident in the Southern California community of Calabasas, it became clear that the sports world would stop on a dime.

Reports then came out that of Bryant’s three daughters were on the chopper with him. While that proved to be untrue, his 13-year-old child Gianna also died. It was shocking. It was sobering. It also showed us just how fragile life itself is. If a larger-than-life figure like Kobe could die in such a tragic way, none of us were immune from it.

As the days turned into weeks following this tragedy, the sports world continued to pay tribute to Bryant, his daughter and the other souls on the doomed helicopter. It culminated in a public service for Kobe and Gianna on Feb. 24. It was a moment that saw the sports world stop.

Game 3 of the World Series was about to get going between the San Francisco Giants and Oakland Athletics on October 17. Two teams separated by mere miles. An entire region already pretty much shut down to watch the ultimate Bay Area sporting event.

Then in a blink of an eye, it did not matter anymore. The Loma Prieta earthquake hit at 5:04 p.m. local time and was centered near Santa Cruz. Those on hand to attend the game felt the shock of a 6.9 magnitude tremor. As someone who was nearby at the time, it was shocking to experience as a child. An A’s fan at the time, baseball no longer mattered. Reality hit for the first time. Was the family safe?

That was a sentiment shared in the San Francisco Bay Area at the time. The World Series would not go on as fires started and people were buried in the rubble. Cypress Street Viaduct on Interstate 880 collapsed. The scenes were harrowing. A total of 63 people died. As it relates to the World Series, it was postponed 10 days before the A’s won in a four-game sweep.

The assassination of the 35th President of the United States on November 22, 1963, was one of the first tragedies covered on television. Even those of us who were not alive can picture legendary anchorman Walter Cronkite tearing up as he broke the news. JA lone gunman had assassinated John Fitzgerald Kennedy in Dallas, Texas.

While the nation mourned Kennedy’s death, the NFL world would play days later. The league, under then-commissioner Pete Rozelle, was criticized to no end. Kennedy’s press secretary, Pierre Sallinger, was a close friend of the commissioner. The two discussed how to move forward after the president’s assassination and decided the games should still be played. Despite this, Rozelle later said it was his greatest regret. The games were not broadcast due to ongoing coverage of the assassination.

Meanwhile, Navy was set to take on Army in the biggest college football game on the schedule one week after his death. Remember, Kennedy was known as a war hero for his time in the Navy. The game was postponed, only to be played on the 22nd anniversary of the Pearl Harbor attack. Talk about things coming full circle.

This remains one of the biggest black eyes in modern American history. The lack of response from the federal government. An impoverished New Orleans area destroyed by one of the most significant storms in recorded history with. Scores of people displaced with their beloved city underwater. President George W. Bush and FEMA came under attack. It was, in many ways, a perfect storm.

The backdrop of this was the New Orleans Saints’ home of the Superdome being used as a housing agent for those displaced. When all was said and done, the Category 5 hurricane caused $125 billion in damages. More than 1,800 people died and a nation was never the same.

In the sports world, this tragic event back in 2005 led indirectly to then San Diego Chargers quarterback Drew Brees signing with the Saints. He would move to New Orleans months later with the hope of helping rebuild the region. The Saints themselves, a long-downtrodden organization, nearly made the Super Bowl that year. They acted as inspiration. It was also a sign of things to come for both the Saints and a rebuilt Bayou.

Dramatic. This past Wednesday and Thursday will go down as one of the craziest stretches in sports history. In fact, one could conclude that it is indeed the craziest thing we have ever seen around the sports world.

The backdrop of the coronavirus pandemic was already on the minds of all Americans as the illness made its way to our shores. That’s when all heck broke loose in Oklahoma City. Jazz star Rudy Gobert tested positive for COVID-19 immediately prior to the game. It was cancelled. The NBA season was suspended. A trickle-down effect became the name of the game.

A nation that was already on edge now has no sports as an outlet. It’s different than when events were cancelled on 9/11 in that we don’t know how widespread the pandemic is going to be and when sports will return.