Week 16 of the NFL season was filled with a ton of drama. From the San Diego Chargers late-game comeback against a suddenly hapless San Francisco 49ers team to the Seattle Seahawks absolute destruction of the Arizona Cardinals, we learned a lot about some of the contending teams around the league.

The second-to-final Sunday of regular season action also set up what promises to be a final week filled with playoff implications in both conferences. Multiple divisions and playoff spots will be on the line.

So as we have done each week this season, let’s check in on 10 takeaways from Week 16 NFL action.

1. The Dallas Cowboys Should be Feared 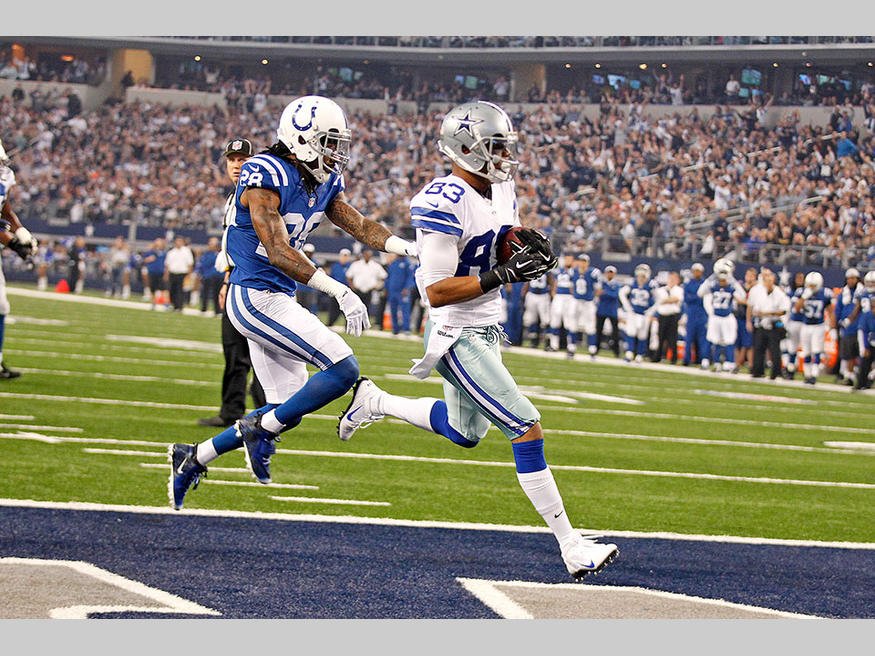 Courtesy of DallasCowoys.com: Dallas laid the wood against a good Colts team on Sunday.

Facing the potential of missing out on the playoffs with a loss, Dallas absolutely dominated a 10-win Colts team by the score of 42-7. And it really wasn’t even that close. Opening up a 21-0 lead just over 15 minutes into the game, the Cowboys offense was clicking on all cylinders. Tony Romo completed 18-of-20 passes with four touchdowns, hitting both Jason Witten and Dez Bryant on touchdown passes.

Meanwhile, a dominating Cowboys defense forced three turnovers and held Andrew Luck to just 106 yards before he was benched in the third quarter. It’s this type of great all-around performance against a good team that should act as a springboard for a deep postseason run in Dallas. This win also signifies the Cowboys first NFC East title since 2009.

2. So Should the Pittsburgh Steelers

It wasn’t too pretty, but Pittsburgh took care of business against another playoff contender in the form of the Kansas City Chiefs on Sunday. Playing through injury, Ben Roethlisberger managed the game perfectly, completing 18-of-25 passes for 220 yards without a turnover.

Pittsburgh’s defense did the rest, holding the Chiefs to four field goals and getting to Alex Smith for six sacks. It was one of those “grind them out” performances that defined Steelers teams of the past. And now firmly in control of their own destiny, Mike Tomlin’s squad can earn the AFC North title with a win against the Cincinnati Bengals next week.

The reason why we are concluding that Pittsburgh is so dangerous is rather simple. An electric passing game with Big Ben combined with Le’Veon Bell work it on the ground and what seems to be a defense that is gelling makes this team pretty darn scary heading into January. 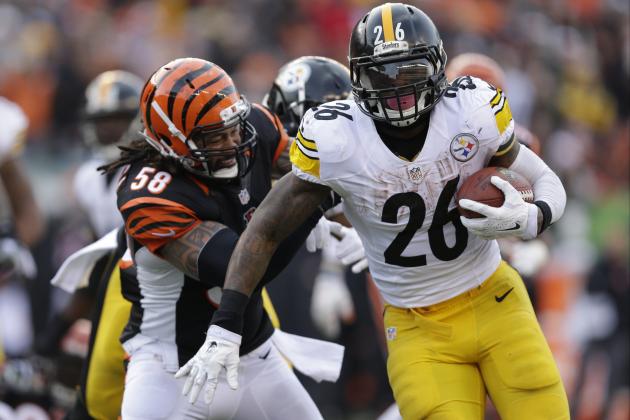 Courtesy of USA Today: No matter what happens Monday night, Cincinnati and Pittsburgh will play for AFC North title next week.

Pittsburgh and Cincinnati will play for the AFC North title on Sunday Night Football, while the Atlanta Falcons will host the Carolina Panthers for the right to win the weak NFC South. Meanwhile, four teams will battle for the final spot in the AFC with San Diego controlling its destiny against the Kansas City Chiefs. If San Diego were to lose, Baltimore could earn the sixth seed with a win over Cleveland. If both Baltimore and San Diego lose, Houston can clinch the final spot with a win over Jacksonville. And of course, Kansas City needs Baltimore, San Diego and Houston to lose in order to earn a playoff spot with a win over the Chargers.

While the AFC Is confusing, five teams have clinched playoff spots in the NFC. It’s now all about the Panthers-Falcons game and seeding. The winner of the Detroit Lions and Green Bay Packers game will take home the NFC North championship, while the loser will be forced to play on the road in the wild card round. Seattle controls its destiny for home-field throughout the playoffs based on its win against Arizona. The winner of Detroit and Green Bay can earn that important home-field if Seattle were to fall to St. Louis. Meanwhile, Dallas needs Seattle to lose and the Lions and Packers to tie in order gain home-field advantage.

4. Two Weeks in, and the Johnny Manziel Experiment is an Utter Failure

Prior to exiting Sunday’s game against the Carolina Panthers with a hamstring injury, Johnny Manziel completed 3-of-8 passes for just 32 yards. It was the second consecutive less-than-impressive performance from the rookie signal caller. And there isn’t yet an indication whether he will play next week.

The idea of Cleveland making the playoffs just three weeks ago has turned to the team potentially looking for another quarterback a year after selecting Manziel in the first round. And Manziel’s inability to show the organization anything as a rookie will lead to a whole bunch of questions heading into what promises to be an interesting offseason.

5. The Arizona Cardinals Could be Done

By virtue of a blowout loss to Seattle on Sunday night, the Cardinals are likely going to enter the playoffs as a wild card team. This means they will play on the road in the first round of the playoffs with either Ryan Lindley or Drew Stanton under center. At this point, it’s hard to imagine Arizona being able to come away with a postseason win, even if it faces off with the winner of the Panthers-Falcons game. It’s an unfortunate situation for a team that has been extremely impressive all season. And in reality, Arizona’s best hope is a win against San Francisco coupled with a Seahawks loss to the Rams next week. Good luck with that. 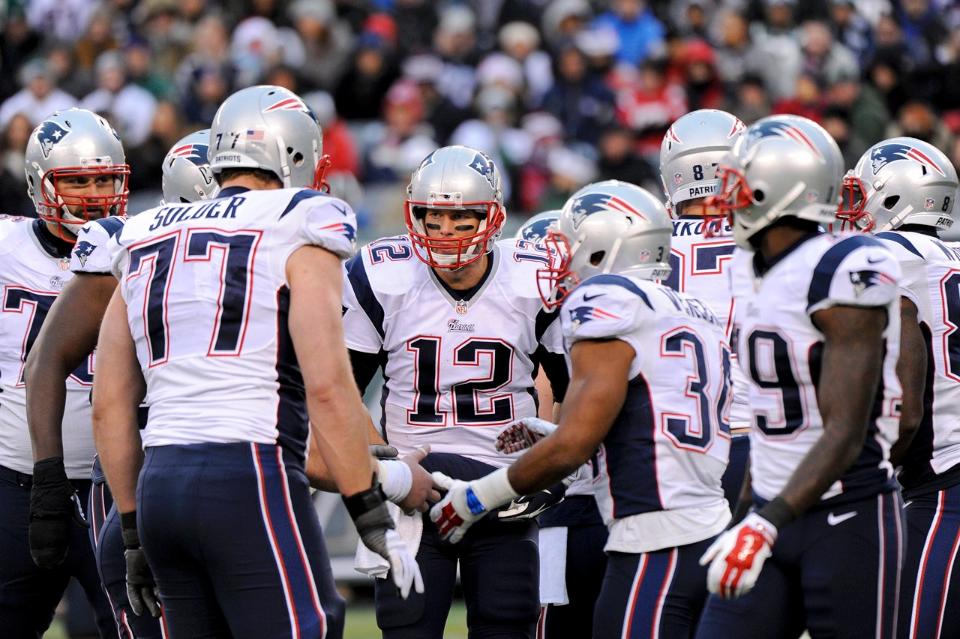 Courtesy of the Patriots.com: Tom Brady and Co. were among the teams that won ugly on Sunday.

Detroit, Carolina, Pittsburgh and New England all put up ugly wins on Sunday. It’s these types of wins that contending teams will have multiple times throughout the season. And it signifies a shift from a regular to a postseason mentality for all four clubs.

A case study here would be New England’s 17-16 victory over a hapless Jets team. On the surface, it’s hard to come away impressed by the Patriots performance. Then we have to realize a total of three points have separated these teams in their last four matchups. Sometimes it doesn’t matter how you win. They all count the same.

7. Things are a Hot Mess in San Francisco

On Saturday night, San Francisco put up the most rushing yards (355) for a losing team in the history of the NFL. Jim Harbaugh’s squad also blew a 21-point second half lead, which is the franchise’s largest blown lead since the Lyndon Johnson administration. More than that, San Francisco’s fourth consecutive loss guarantees that it will not finish with a winning record fo the first time since 2010.

Now entering what promises to be a drama-filled offseason, the 49ers appear to be a mess. Harbaugh will not be back as the team’s head coach. Multiple free agents are set to depart. And in reality, others will likely consider retirement. It’s now up to general manager Trent Baalke to narrow what looks to be a huge gap between his team and the other two playoffs teams in the NFC West.

It’s always hard to consider replacing a future Hall of Famer. This is only magnified when said player has led your team to a Super Bowl championship. Following New Orleans lackluster 30-14 loss to the Atlanta Falcons, it is eliminated from playoff contention with a 6-9 record. It’s also the second time in three years that Drew Brees and Co. have missed the playoffs.

At nearly 36 years old and coming off a season that saw him regress a great deal, Brees appears to be on his last legs. And while he should be counted on to be the team’s starter for the next couple years, the Saints need to start thinking about drafting an eventual replacement.

Marcus Mariota and Jameis Winston are likely pipe dreams and will probably want to start out of the gate. That brings up the idea of New Orleans selecting someone like UCLA’s Brett Hundley to sit behind Brees for a couple years. As we have seen in Green Bay and before that San Francisco, succession at the quarterback position can lead to sustained success. It’s time the Saints start thinking about this.

9. The Seattle Seahawks are the Class of the NFL

As the most-talented team in the NFL, Seattle is also playing the best football in the league. Following a 35-6 drubbing of the Cardinals in a game that saw Seattle put up a franchise record 596 yards, Pete Carroll’s squad controls its own destiny as it relates to home-field advantage in the playoffs.

This game saw Russell Wilson put up over 420 total yards with three touchdowns, while Marshawn Lynch added a ridiculous 79-yard run himself. It’s this type of domination that has everyone thinking Seattle is the favorite to repeat as champions. And if it earns home-field, the rest of the NFC is going to have a heck of a time stopping this from happening.

Sure Dallas defeated the Seahawks in Seattle earlier this year, but that was a much different Seattle time. Over the course of its past five games, the Legion of Boom has yielded a total of 33 points, two less than Seattle’s offense scored on Sunday night alone.

10. The Minnesota Vikings Need to Learn to Close Games out 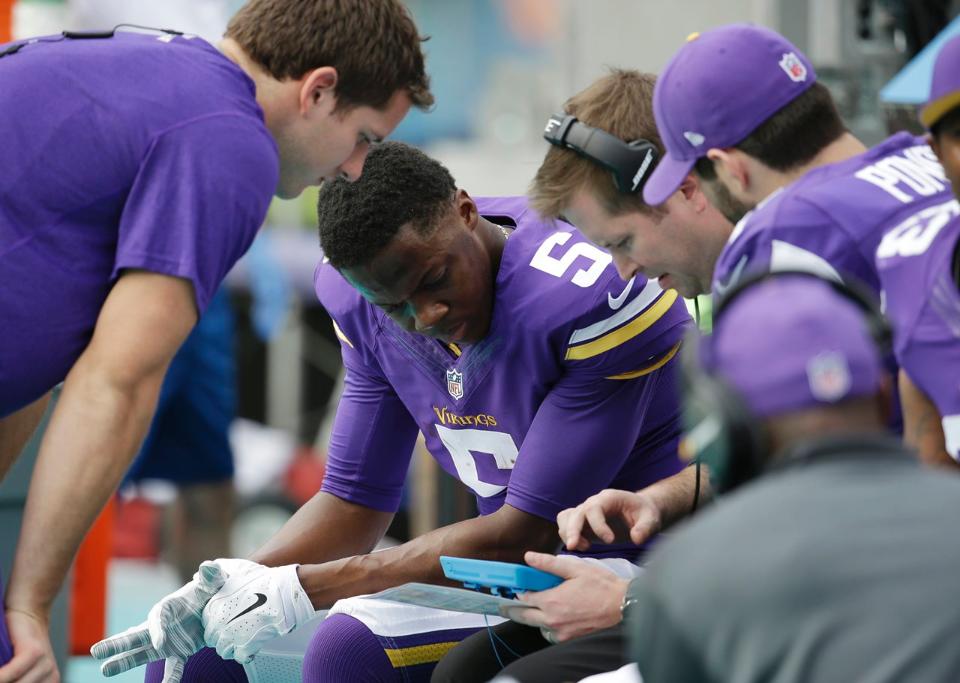 Courtesy of Vikings.com: Yet another heartbreaking loss for Teddy and the Vikings.

The Vikings could have contended for a playoff spot this season. Instead, they are going to be sitting at home wondering what could have been. Despite throwing a rookie quarterback into the fire and losing their future Hall of Fame running back, the Vikings remained competitive throughout the entire season.

But like we have seen with this team in the past, it continues to give games away late. A blocked punt late in the team’s 37-35 loss to Miami was yet another example of this team finding every possible way to lose. Now at 6-9 on the season, Minnesota’s last five losses have some by one score. And in order for this team to contend in 2015, it simply needs to find a way to close out games. There’s no excuse for this.