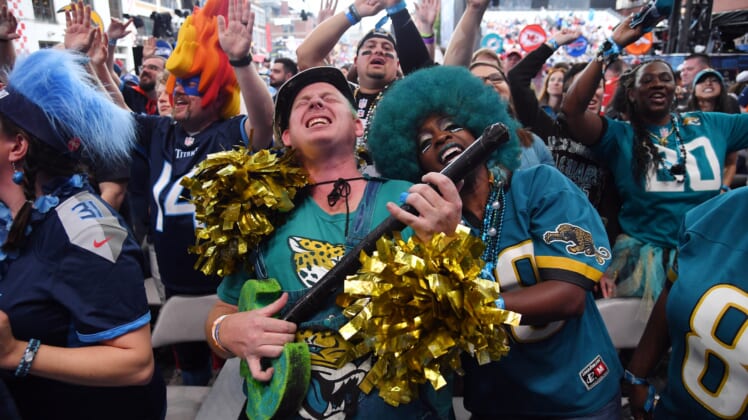 While some NFL rookies already seem destined for stardom this season, others have not quite garnered as much hype as of yet.

Though now that rookie minicamps have been completed, let’s take a look at some rookies who are sure to become instant fan favorites this season.

With veteran backs LeSean McCoy and Frank Gore combining for the ripe age of 66, it was not surprising to see Buffalo draft a rookie. The Bills selected Singletary in the third round after he produced a total of 4,684 yards and 67 touchdowns during his three years at Florida Atlantic. That’s a lot of production and work, but it is nowhere near to the mileage Singletary’s older teammates have piled up. If either Gore or McCoy takes a step back, Singletary would be looked upon to step up.

Already becoming a fan favorite for his guest appearance on NFL Network’s “Good Morning Football,” Winovich will be fun to watch as he creates chaos for opposing offenses this year.

He fell nicely to the Patriots in the third round of this year’s draft after producing 18.5 sacks and 164 combined tackles as a defensive lineman at Michigan. Now, Winovich joins a division that contains three second-season quarterbacks he can feast on this fall.

Look for Jacobs to have an instant impact on what will hopefully be a better Oakland offense this year. He is young and does not have too much college mileage piled up (2,062 scrimmage yards), which should prime Jacobs for a bell-cow role in Oakland. It should not take much for Jacobs to outshine veteran Doug Martin as summer practices get underway. The latter’s best years are far behind.

Now, this young rookie has a legitimate chance of winning the starting job over the summer. Consider Haskins a new breath of hope for a Redskins franchise that suffered terrible misfortune at its quarterback position last year. Haskins last passed for an impressive 4,831 yards and 50 touchdowns in 2018 at Ohio State.

This year’s draft class was rich with tight end talent including Fant, who managed 519 yards and seven touchdowns at Iowa in 2018. It was great to see the Broncos land Fant 20th overall and still manage to nab quarterback Drew Lock in the second round. Fant should benefit from working with Joe Flacco, who has a good history with pass-catching tight ends as a member of the Ravens. Fant might even warrant a late-round fantasy pick.

All of the hype for the Seahawks offense heading into 2019 surrounds rookie receiver D.K. Metcalf. But it is Jennings Jr. who stands to emerge as a young star this year. According to Pro Football Focus, Jennings Jr. led the Big 12 with 2.74 yards averaged per route in the slot. It may be Jennings Jr. who winds up with the bulk of the work now available due to the retirement of Doug Baldwin. Just wait and see.

It would be lovely to see Sanders emerge as the workhorse running back that the Eagles have lacked in recent seasons. The Penn State standout last rushed for 1,274 yards and nine touchdowns in 2018 and averaged 6.0 yards per attempt over his three-year college career.

For this, Sanders may just oust Jordan Howard out of his starting role sooner rather than later.

Of course, the No. 1 overall pick belongs on this list. Murray’s fan base is surely growing by the day and it is going to be fun to see how he responds to life as an NFL quarterback. Will his smaller stature get in the way of him succeeding with the Cardinals? Fortunately, Murray is a serious dual-threat quarterback who rushed for a ridiculous 1,001 yards and 12 touchdowns at Oklahoma. He is going to become an exciting rookie to observe, whether you are a Cardinals fan or not.

Montgomery is currently behind both Tarik Cohen and Mike Davis on the depth chart. But, the rookie is in line to change up this order in 2019. He led his current draft class with 185 broken tackles in his last two years Iowa State, according to Pro Football Focus. With Cohen utilized as more of a pass-catching back, it could be Montgomery rather than Davis who eventually commands the lion’s share of work toting the ball.

Williams wants to buy his grandma a new car with his first paycheck, and he wants to sack Tom Brady. In fact, Williams made reference specifically to Brady who he joked has been playing in the NFL since before he was born. This is not exactly the case as Williams was born in 1997 and Brady was drafted in 2000. But, what is not to enjoy about Williams so far? Jets fans should sit back and enjoy watching their third-overall pick breathe new life into his defense right out of the gate.