10 NBA players who should be traded this season 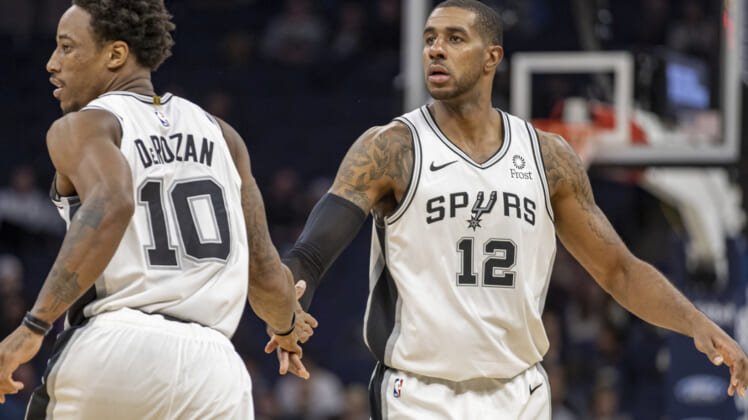 We’re just over two months into the 2019-20 NBA season, and contenders are already separating themselves from pretenders.

A total of six teams find themselves 10-plus games under .500. That includes a Golden State Warriors squad ravaged by injury.

Back east, the Cleveland Cavaliers and Chicago Bulls find themselves amid another season of irrelevance.

This should lead to a more active NBA trade period starting here soon. It’s in this that we look at 10 stars who should be moved ahead of February’s deadline.

Recent reports suggest that Cleveland is finally looking to trade its only real solid asset. It makes perfect sense given the team is in the initial stages of a rebuild. Why hang on to Love when he prefers to play for a contending team? General manager Koby Altman is finally starting to realize this.

Love, 31, still has a nice amount of trade value. He’s been solid this season, averaging 16.2 points and 10.7 rebounds on 37% from distance. Contending teams could surely use a stretch big. That list includes both the Toronto Raptors and Houston Rockets.

It has not gone according to plan for Russell in his first season with the five-time defending Western Conference champs. Injuries have ravaged the Warriors’ roster. They currently boast the worst record in the Western Conference at 7-24.

Despite this, the Warriors are going to be looking to contend moving forward. With Stephen Curry and Klay Thompson coming back healthy next season and a likely top-three pick in the 2020 NBA Draft, that makes sense. Moving Russell on the fly could help Golden State add more assets as a way to bring in a star player next summer. Russell, 23, is averaging 22.4 points and 6.2 assists on the season. He has some nice trade value for both contending and non-contending teams.

Do we really want to see the soon-to-be 43-year old Carter waste away on one of the worst teams in the NBA as he finishes up his final season? I don’t think so. Instead, Carter could still be useful for contending teams throughout the Association.

The eight-time All-Star is in the midst of a down season for Atlanta. He’d come cheap from both a compensation and salary standpoint. It would make sense for one of the two Los Angeles-based teams to come calling with a cheap offer.

We previously focused on how it’s high time for the Spurs to start anew with a rebuild. That should include dealing a veteran in Aldridge who does not fit into the team’s long-term plans. Sure it’s been a nice run. But it must come to an end prior to February’s trade deadline.

Whether it’s Gregg Popovich or someone else manning the Spurs’ bench, they are in no way playoff contenders in the top-heavy Western Conference.

Moving an All-Star caliber player who is still averaging over 19 points per game would net the Spurs some assets. Given Aldridge has just one more year left on his contract after the 2019-20 season, he’d be of interest to many teams out there.

It was just recently that the Pelicans decided to move Ball to the bench after struggling shooting early in his career with the team. In reality, the young guard simply does not seem like a fit with Jrue Holiday in the back court.

Would New Orleans be willing to sell low on Ball? Would another team come calling with a decent offer? Despite his struggles this season, the former No. 2 overall pick is still 22 years old and boasts some upside. A change of scenery should be in the cards here.

To say that a rift has grown between this star guard and Bulls head coach Jim Boylen would be an understatement. With the Bulls at 12-20 on the season, it might settle itself should the brass in Chicago decide to move on from Boylen. If not, the next reasonable course of action would be to trade LaVine.

The backdrop here is a Bulls core that has no shot of contention moving forward. The idea here would be to trade LaVine and get other assets for him. If that were to happen, there would be no shortage of teams interested in a player that’s averaged north of 23 points on 38% shooting from distance since the start of last season.

Here’s another Spurs player that could be on the move. An impending free agent, it doesn’t seem like DeRozan has a future in San Antonio. He has not meshed well in the system and continues to struggle on the defensive end of the court. It’s led to speculation that the Spurs will look to move the former All-Star ahead of the trade deadline.

DeRozen would have to find a perfect fit in that he’s a wing player that can’t hit from beyond the arc and has had issues on the other end of the court. Despite this, the 30-year-old is still averaging north of 20 points per game and shooting 51% from the field. Even if it is as a rental, he could help a multitude of contending teams.

It’s readily apparent in Detroit that the Pistons are Andre Drummond’s team. He’s averaging a whopping 17 rebounds to go with 17.7 points per game. It has the big man as one of the most-improved players in the NBA.

This also has us thinking how the Pistons’ roster could be more well rounded rather than having its two best players as bigs. Would Griffin net a massive return after an injury-plagued past year plus and with his bloated contract? We’re not sure. What we do know is that he could help Detroit add perimeter help to go with Drummond. He’d also obviously be of interest for a ton of teams around the Association.

As has been proven to be the case over the past several seasons, the Damian Lillard-C.J. McCollum backcourt is not going to be enough for Portland to contend out west. Now, at 14-17 on the season, it’s time for general manager Neil Olshey to break this thing up.

The good news for Portland is that McCollum would still be a valuable trade chip. He still at the top end of his prime and is set to count an average of just $26-plus million against the cap before hitting free agency following the 2020-21 season. He’s also averaged north of 20 points on 40% shooting from distance since the start of the 2015-16 campaign.

Here’s a player we firmly expect to be moved ahead of the deadline. Iguodala has sat out all season after the former NBA Finals MVP was traded by the Golden State Warriors back in July. He wants out of dodge. Preferably to the Los Angeles Lakers.

Whether something comes to fruition on that end remains to be seen. What we do know is that Memphis is looking to acquire assets back in a trade. As February nears and more contending teams grow desperate, we would not be surprised to see a trade worked out on this front. Iggy’s defensive prowess and veteran leadership would represent a major boon for most top-end teams.