In celebration of the recent hires of Deion Sanders and Eddie George as HBCU head coaches, we take a look at 10 of the most successful ever. 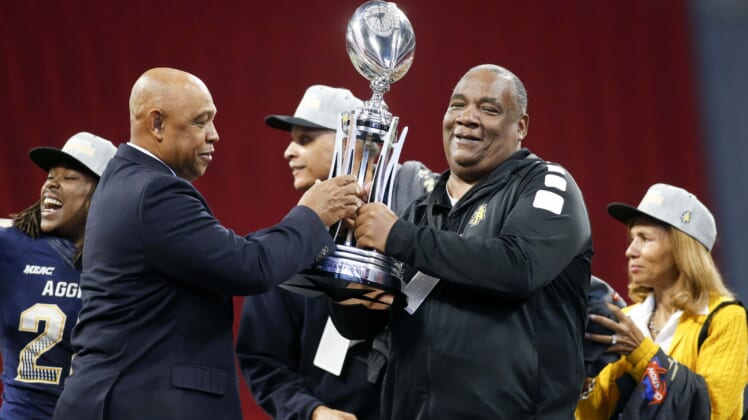 Last week, former Heisman Trophy winner and NFL Pro Bowler Eddie George was introduced the head coach of Tennessee State University. This makes him the second former Pro Bowl player to receive a head coaching job at an HBCU in the past year.

Less than a year ago, Jackson State hired Pro Football Hall of Famer Deion Sanders as their head football coach and is currently in his first season with the team. The hires of Sanders and George have been looked at with great optimism as a chance to mentor a new generation of HBCU football players, preparing them for excellence at the professional level and building new powerhouse programs.

Thus, it’s only right we honor some of the great HBCU football coaches that came before them. HBCU football has a deep, storied history not only filled with great players that went on to become Hall of Famers such as Jerry Rice, Walter Payton, Michael Strahan, etc., but also some great coaches.

Here are 10 of the most successful HBCU college football coaches ever.

While still in college at South Dakota State University, Abbott was hired by Booker T. Washington in 1913 to coach the Tuskegee Golden Tigers’ football team once he graduated. However, upon graduation, he would join the U.S. Army and would not take over as coach for Tuskegee until 1923.

The most recent head coach on this list, Rod Broadway got his start in coaching in 1979 as the defensive line coach for East Carolina. He would subsequently serve in that same role for 33 years with Duke, Florida and his alma mater UNC before receiving his first head coaching job with North Carolina Central in 2003.

In his 14 years as a head coach with North Carolina Central, Grambling State and North Carolina A&T, Broadway compiled an overall record of 127-45, winning conference championships with each team. He is the only coach to lead three different schools to black college national championships, securing five total.

After graduating from Knoxville College in 1927, Gaither began his coaching career at the high school level as a way to support his family following his father’s passing. He would join the Florida A&M Rattlers coaching staff as an assistant coach in 1937 a role he would serve in until 1945 when he was promoted to head coach.

In Gaither’s 24 years as Florida A&M’s head he never had a losing season winning 20 SIAC championships and eight black college national championships. With an overall record of 203-36-4, Gaither has the third highest win percentage (.844) of all college football head coaches with at least 200 wins.

Gaither was inducted into the College Football Hall of Fame in 1975, making him the first HBCU head football coach to earn the honor.

W.C. Gorden’s college football journey began at Tennessee State where he played for the Tigers football team under coach Henry Kean from 1948-1952. It wouldn’t be until 1966 that Gorden received his first coaching job joining the Jackson State coaching staff as an assistant. He would hold that role for 10 years before he was hired as the interim coach in 1976 and made permanent coach following that season.

Over the course of 14 full seasons with Jackson State (excluding the 1976 season in which he went 1-1 as interim coach), W.C. Gorden led the team to a 118-47-5 record winning eight Southwestern Athletic Conference (SWAC) championships and a black college national championship in 1985.

Prior to coaching, Edward P. Hurt played defensive end for the Howard Bison and was selected as an All-American. He began his coaching career as head coach of Virginia Seminary (now Virginia University of Lynchburg).

After three years, he would go on to coach the Morgan State Bears where he would remain for the next 30 years. Hurt compiled an overall record of 173-51-20 with Morgan State leading them to 14 Central Intercollegiate Athletic Association (CIAA) championships and six black college national championships.

In addition, he also coached the Bears’ basketball and track teams winning 13 CIAA championships in the former and four in the latter.

His record in his 10 years with Tennessee State reached 93-15-3 winning five conference championships and four black college national championships. Kean’s total combined record as a head football coach was 165-33-9 including six unbeaten seasons. Kean also coached basketball for Tennessee State compiling a record of 108-26 in his six years including finishing the 1948-1949 season with an undefeated 24-0 record.

Following a college career that saw him play guard for the Kentucky State Thorobreds, John Merritt would accept a head coaching job at Jackson State. He would remain head coach for Jackson State for 11 seasons finishing with a record of 63-37-5 winning three conference championships.

Merritt then went on to coach Tennessee State in 1963 and would serve as their coach for the next 20 years. In this stint, Merritt did not record a single losing season. A sterling overall record of 172-33-7 was punctuated by seven national championships.

After a below-average stint as head coach of Jarvis Christian College going 2-3-1 in each of his three seasons with the team, Mumford recovered well with Bishop College finishing 22-7-1 in three seasons.

Mumford won his first conference title and national championship with Texas College winning two SWAC championships in 1934 and 1935 finishing each season undefeated. In addition, he led them to the HBCU crown in the latter year.

In 1936, Mumford became the head coach of the Southern Jaguars, where he would remain for the next 25 years. While there, he compiled a record of 179-61-13, winning 11 SWAC championships and five HBCU national championships.

Eddie Robinson head coaching career lasted an astonishing 56 years, all with the Grambling State Tigers beginning when they were the Louisiana Normal Tigers. His final record was 408-165-15, as he earned the third-most career wins amongst all college football head coaches.

Robinson also led Grambling State to 17 SWAC championships and nine national championships. He is the only head coach to win an HBCU national title in five different decades.

In 1992, Taylor moved on to become coach of the Hampton Pirates, where he would coach the next 15 years. Taylor led the Pirates to a 136-49-1 mark, earning eight conference championships (CIAA and MEAC respectively) and five national championships. Finally, Taylor ended his coaching career with a five year stint with Florida A&M going 35-19 winning the MEAC title in 2010. Overall, Taylor’s record as a head coach was 232-96-4.