Winners, losers from Texans’ overtime win against Bills in Wild Card round 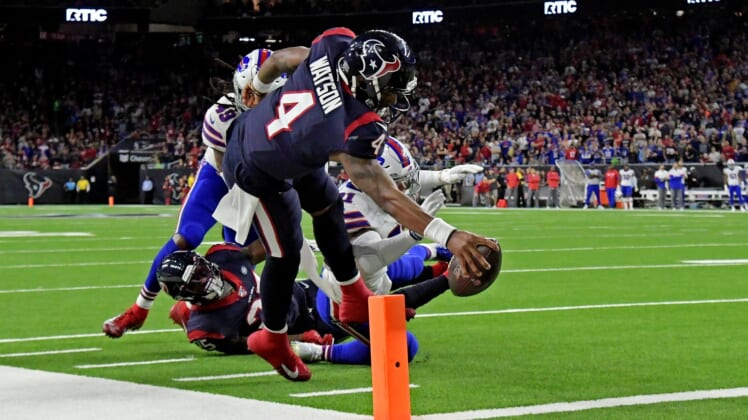 The Houston Texans hosted the Buffalo Bills to open up the Wild Card round of the NFL playoffs, and as most predicted the game came down to the wire.

The Texans got off on the wrong foot and went into halftime down 13-0. Then after avoiding a disastrous start to the second half, they fell into a 16-0 hole before finally waking up from their slumber. Houston pulled to within one score in the third quarter, setting up an epic final stanza.

Houston scored 11 unanswered points and appeared to have a shot at winning in regulation. Then Bills kicker Stephen Hauschka drilled a 47-yard field goal with seconds left on the clock in the fourth quarter to tie it up, 19-19, and send the game into overtime.

In overtime, both offenses had a chance to score but came up short. Then, Deshaun Watson and the Texans found a way to get the job done, winning 22-19 thanks to one of the craziest plays we’ve seen all season long.

These are the biggest winners and losers from the Texans’ overtime win over the Bills in the Wild Card round.

In case you weren’t aware of just how special Deshaun Watson is, Saturday’s performance against the Bills was a teachable moment. Down 16-0 in the third quarter, Watson battled back against a very tough Buffalo defense, his own coach’s lack of imagination, and his offensive line’s ineptitude. Ultimately, he came through with a gutty performance that has the Texans advancing to the Divisional Round.

The comeback started in earnest when Watson dragged multiple defenders into the end zone for the first Texans touchdown of the game (watch here). He then scored the two-point conversion in dramatic style. Watson also was perfect passing during the final two quarters of regulation after Buffalo went up 16-0, going 8-of-8 for 111 yards and a touchdown.

In overtime, Watson found a way to one-up himself with one of the most spectacular escape acts we’ve ever seen to spark the Houston win. The third-year quarterback finished with 245 yards and a touchdown passing, along with 55 yards and a score on the ground.

Josh Allen was all that and a bag of chips for the Bills in the first half. He completed 13-of-20 passes for 131 yards, rushed for 52 yards, and had an electrifying 16-yard touchdown catch on a trick-play toss from John Brown.

Then, a lost fumble on a scramble that turned the game on its head.

Things didn’t get any better for Allen going forward, either. He took a couple of really bad sacks, hurt his team in a big way with a brutal intentional grounding penalty late in the fourth quarter, and was unable to make up for it on Buffalo’s final drive.

After such an incredible first half, Allen had a miserable second half outside of a few highlight-reel plays, then came up short in overtime as well.

Buffalo veteran pass rusher Jerry Hughes had 4.5 sacks all year long, and he had just one multi-sack game during the regular season. On Saturday, he was a major force for the swarming Bills, racking up three sacks.

Now, this is a player who’s had a couple of double-digit sack seasons. So this performance didn’t come completely out of left field. Still, it was unexpected, and it had a huge impact on Saturday’s Wild Card game.

This isn’t a new issue, but it was magnified as Houston took on a Buffalo team that features a very good defensive front. Deshaun Watson was under duress practically every single time he dropped back to pass. He ultimately was sacked an astounding seven times, and you can’t blame the quarterback for holding onto the ball too long on most of them.

This is a major problem going forward for Houston. The competition will only get tougher as the Texans move deeper into the playoffs. And while Watson can be magical under pressure, he needs a ton more help than he’s getting, both now and in the future as the team looks at improving things during the offseason.

Just a couple of months ago, J.J. Watt tore his pectoral and was ruled out for the rest of the regular season. Remarkably, he was activated off injured reserve ahead of the playoffs. Not only did Watt play, he played well and was a big spark for Houston’s defense.

In the third quarter, Watt came up with his first sack since the first weekend of October and was seriously fired up about it (watch here). He finished the game with just one tackle and one sack, but he had multiple pressures and was an inspirational figure for the Texans when they needed it the most.