Winners, losers from 49ers’ dominant win over Browns on ‘MNF’ 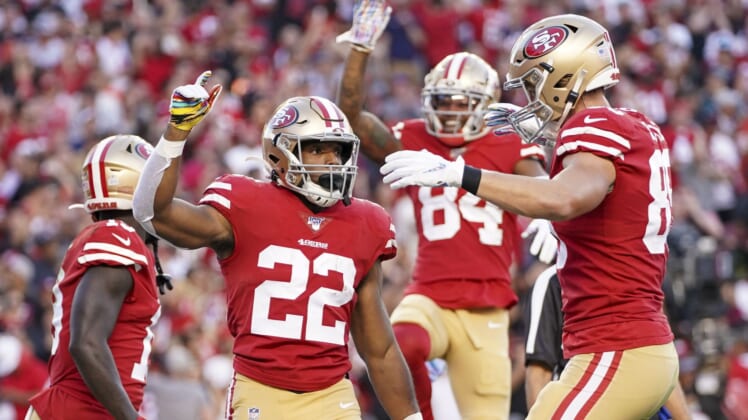 The San Francisco 49ers remained undefeated with a resounding victory over the Cleveland Browns on Monday Night Football to cap off Week 5.

Taking a 21-3 lead into halftime, the 49ers didn’t let up in the second half and continued to pummel the Browns into submission. The end result was a 31-3 blowout win that keeps San Francisco atop the NFC.

These are the biggest winners and losers from the action Monday night.

Winner: Matt Breida sparked it all

49ers fans knew it was going to be a special night when Matt Breida ripped off an 83-yard touchdown run on the first offensive play of the game for San Francisco.

A bit later on, Breida capped off an eight-play, 74-yard drive with a five-yard touchdown reception to put the 49ers up 14-0.

Those two scores blew the game open for the home team, and Breida continued to pile up the yardage throughout the night, finishing with 129 yards and two touchdowns from scrimmage.

Loser: Baker had a miserable night

Leading up to this Monday night clash, we highlighted Mayfield’s penchant for turnovers as a huge issue going against a 49ers defense that has been good at creating them this year.

It didn’t take long for that matchup to bear fruit. Richard Sherman picked off a very poor throw by Mayfield in the first quarter.

Mayfield threw a second interception in the second quarter down in the red zone, though this one we can’t blame on the quarterback (more on that later). But the quarterback is responsible for the fumble he lost and had three turnovers in the first half.

Looking lost most of the night, Mayfield managed to complete just 8-of-22 passes for 100 yards with no touchdowns, two interceptions and two lost fumbles. Then, with just about five minutes left in the game, down 31-3, he was benched.

The 49ers have one of the league’s most dominant front sevens. That unit packs an incredible punch on passing downs. Featuring the likes of DeForest Buckner (who forced a fumble on a sack), Dee Ford, Nick Bosa and Arik Armstead, the front line is bolstered by a ton of speed in the linebacking corps.

Mayfield took four sacks and was hit eight times before being benched.

Bosa was in Mayfield’s face seemingly on every single passing down, and right at halftime he savagely trolled the quarterback with a flag-waving celebration. He was also the defensive star of the game with two sacks and five quarterback hits to go along with four tackles, including two for a loss, and a fumble recovery.

Coming off a four-game suspension, Callaway was activated just before Monday night’s game. His return to action did not go well.

During the second quarter, after the Browns had driven down inside the 49ers’ 10-yard line, Callaway found a soft spot in the middle of the field right at the goal line. Mayfield hit him right in the hands. But instead of catching a touchdown to pull to within one score, Callaway dropped the ball and it was picked off by K’Waun William, who took it back for a 49-yard return.

Six plays later, the 49ers scored their third touchdown of the game. That’s a 14-point swing that damaged Cleveland’s ability to compete in a deep way.

Winner: 49ers put game away with brilliant drive to open second half

One of the hallmarks of the Kyle Shanahan offense this year is flawless execution coming out of halftime. The 49ers had scored touchdowns on their first drive of the second half in each of their first three games. They did it again Monday night.

For the first time all night, Jimmy Garoppolo got going in the passing game. He completed 5-of-5 passes for 77 yards, capping off the drive with a gorgeous touchdown throw to George Kittle.

The 49ers came out of halftime and marched 90 yards downfield in nine plays to go up 28-3 and essentially buried the Browns in the process.

Loser: Odell Beckham was a no-show

Okay, so he showed up, and early on it looked like Beckham might have a big night. He tossed a 20-yard pass on a trick play to his good buddy Jarvis Landry on Cleveland’s first play of the game. He also ran 15 yards on two carries.

Then, Beckham disappeared. He dropped two passes early in the game that he normally would have snagged, which was a dark omen for the rest of his evening in Santa Clara. All told, OBJ was shut down to the tune of two catches on six targets for just 27 yards.

That’s most definitely not what the Browns thought they were getting when they made the trade.

The 49ers were able to run the ball at will throughout the night. We already touched on how effective Breida was, but he wasn’t the only 49ers running back to feast.

Tevin Coleman, in his first game active since Week 1, went off, too. Coleman and Breida combined to rush for 211 yards and two touchdowns on 27 carries as the San Francisco offensive line physically dominated Cleveland’s front seven.

The downer is that fullback Kyle Juszczyk, who is one of the most important players on the team’s offense, suffered a knee injury in the second half.

Robbie Gould, one of the most reliable kickers in the NFL, had an awful night. He missed field goals from 47 and 52 yards out in the first half. Then in the third quarter after the 49ers marched 82 yards on 15 plays, he had a 32-yard field goal blocked.