Put some respect on his name: Why the New York Knicks shouldn’t trade RJ Barrett 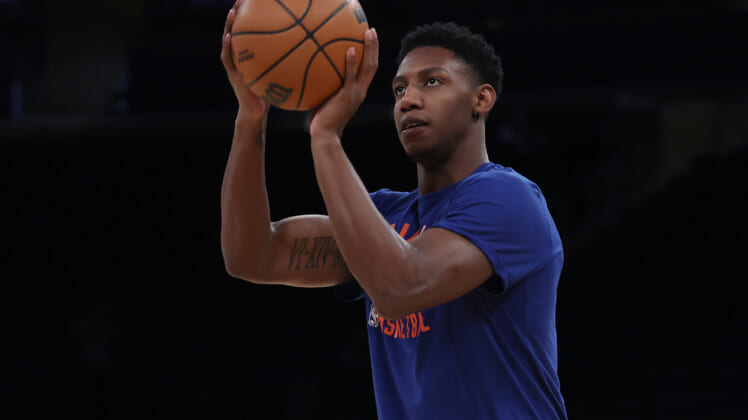 New York Knicks rising star RJ Barrett deserves more respect than he’s been given of late. The 22-year-old wingman has done more to grow his game than probably any other player on the Knicks. RJ is also in line for a new contract extension, and he deserves one.

At first, Utah Jazz President Danny Ainge wanted Barrett in a trade for Donovan Mitchell. He backed down, however, not wanting to be bothered with contract negotiations. The Knicks fervently replied that RJ was off the table, an untouchable. As he should be. Barrett is the shining light in the Knicks’ arsenal. With his drive to always be better, he’s exactly what the Knicks would need if they have Mitchell on their team.

Let’s take a look at why the Knicks roster — if they add Donovan Mitchell — would be far better if Barrett remains on it.

Barrett is growing as a leader to the young players on this team. In January, he expressed his desire to do more of that. “I feel Year 3, also just being with this staff and these guys for a couple of years now, it’s a lot easier for me because I’m out there on the court experiencing things, seeing things, just trying to help in any way that I can. I feel that leadership is not just what you say. It’s what you do, how you act, how you comport yourself in the facility, on the court, in the games everywhere.”

Barrett has grown more than any other player on that team. From his first season, even with all the turmoil, as a rookie posted 14.3 points per game, 5.0 rebounds, and 2.6 assists. 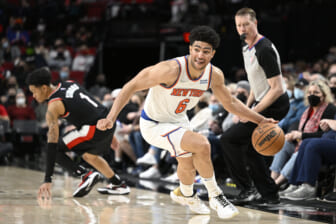 In his second season, where the team had such growth, only Randle was rewarded and awarded. On the other hand, Barrett started going to his right at the basket, slashing his way through. He raised his stats, averaging 17.6 points, 5.8 rebounds, and 3.0 assists per game.

In that third season, when the Knicks fell, lost their identity, and their culture, Barrett pushed forward. He ended the season with 20.0 points, 5.8 rebounds, and 3.0 assists. No matter how his game turned out, he never missed a postgame press conference. He didn’t run. He didn’t hide. He stood up and repped the Knicks.

Barrett has done far better than he gets credit for

From day one, Barrett was compared to Zion Williamson and Ja Morant. As a result, many said the Knicks should never have taken him at number three in the 2019 draft. Barrett was the number one pick going into his first year at Duke, according to Forbes magazine,

Barrett became a Knick during a time when the team had no culture. No identity. His first 22 NBA games found his coach, David Fizdale, fired with a 4-18 record. Barrett is a player who has never experienced loss in this manner, not only experiencing it for the first time but with a distressed coach and a team without direction.

RJ Barrett has played 198 games in his young career. He turned 22 years old this June. He has 3,469 points, 1,101 rebounds, 568 assists, and 325 three-pointers. Only five people in the league had these stats before reaching 22 years of age. Barrett deserves a contract extension. He may not deserve a max contract, but a near max should be considered.

After the All-Star break, when the Knicks’ 25-34 record hung over bowed heads, he vowed to grow and have a 20-point average by the end of the season. And he did it. He recorded eleven 30-point games and had an after-All-Star break average of 23.6 points, six rebounds, and 3.5 assists.

ESPN analyst Richard Jefferson said last year that Barrett “is not good enough to draw star players to the New York Knicks.” Donovan Mitchell wants to play here. Carmelo Anthony is as big a star as the NBA has. He didn’t draw players, either.

When drawing stars to the world’s most famous arena, it’s not that players don’t want to play with players on the Knicks. It’s been said it’s the Knicks’ management. The Knicks seem to be acting in desperation again. They may be giving away their future for some “right now” dreams that will not materialize without this young man.

What’s next for Barrett and the New York Knicks?

Barrett could be an All-Star this season. Of course, that’s with the right team. Is a team consisting of Jalen Brunson, Evan Fournier, Julius Randle, and Mitchell Robinson enough to get him there? We won’t know until at least the trade deadline. Right now, as most Knicks’ Twitter await word of the trade, many hope RJ Barrett is still wearing No. 9 as a New York Knick.