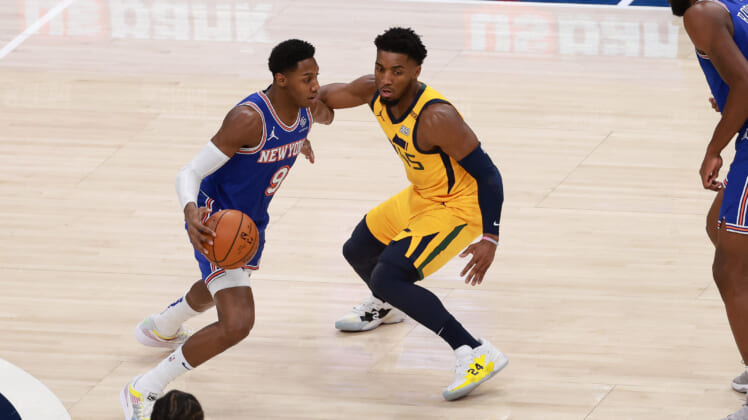 After trading Rudy Gobert, it may only be a matter of time before Donovan Mitchell is traded too. Despite being a three-time All-Star who’s helped the team reach the playoffs all five of his years in the league, their current roster isn’t built to win.

But a Mitchell trade? Well, that could help their rebuild reach new heights in the long run, even if the valleys are lower than the fans want to go.

Meanwhile, the New York Knicks would love to add Mitchell to a core with talent, but lacking a true star. Mitchell immediately brings star power to Madison Square Garden, but how much do they have to part with?

There’s been speculation that the Jazz aren’t intrigued with the most valuable trade chip the Knicks have, that being RJ Barrett. The main reasoning seemed to be due to Barrett being in line for a contract extension that the Jazz may not be willing to commit to, as they’re in for a long-term rebuild. While Barrett is valuable, is he who they want to hitch their cart to? The previous thinking had been no.

But that might not be the case at all.

According to Ian Begley of SNY, the Jazz have inquired about a trade package featuring RJ Barrett, Mitchell Robinson, and ‘at least three first-round picks‘.

Who knows exactly where trade talks broke down, or who walked away from negotiations. Maybe the Knicks truly don’t want to part with Barrett, and that’s been the sticking point all along.

If it’s possible for the Knicks to just include a couple more first-round picks instead of coughing up Barrett, it’d be similar to what the Minnesota Timberwolves did by holding onto Jaden McDaniels. Even if their draft picks are gone.

In the end, if it’s the difference between not having Mitchell, and adding one of the top-15 players in the NBA to the roster, what’s a couple more first-round picks?

The chance to acquire a player of Mitchell’s caliber doesn’t come around often. No one will remember the cost if the Knicks are celebrating a playoff run. With Mitchell on board, they’d likely have an even better chance of attracting more talent in free agency or on the trade market. Sometimes the price to pay to get in such a position is worth whatever it takes.