What could the Golden State Warriors realistically land in Draymond Green trade? 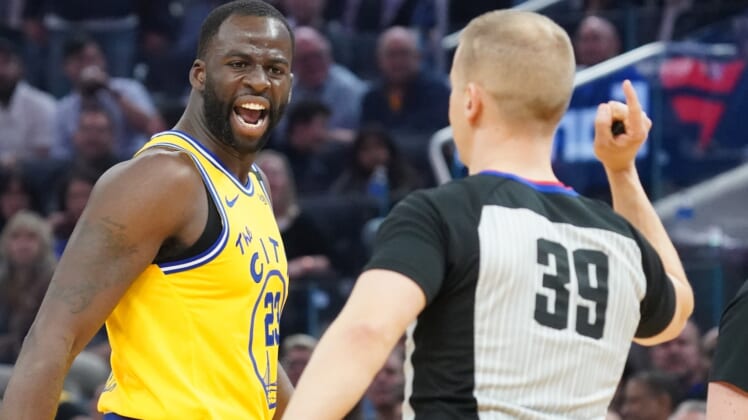 The Golden State Warriors became one of the best dynasties in sports in recent years with five conference titles and three NBA championships. Now, coming off an injury-plagued season that also saw the emergence of Eric Paschall, the Warriors could make significant changes this offseason.

Reports speculate that Golden State could net a lottery pick in return for the 30-year-old. However, that return feels too good to be true. Green is coming off a disappointing season that saw the former NBA Defensive Player of the Year shoot just 39% from the field.

Even then, Green’s value is about his all-around game. He continues to play at an elite level on the defensive end and is a triple-double waiting to happen. This lends credence to the idea that the Warriors could get something of substance for the much-maligned big man.

Here’s a look at what the Warriors could realistically land in a blockbuster Draymond Green trade.

Marcus Smart and Enes Kanter from the Boston Celtics

Boston has three players capable of averaging 20-plus points per game. What it doesn’t have is a defensive-minded big. The Celtics signed Kanter in free agency last summer to help following the loss of Al Horford. He can score, but is among the worst defensive bigs in the game.

In trading away Smart, Boston opts for more defense inside rather than out on the perimeter. For Golden State, the team would be adding two scorers off the bench, one of which is among the best perimeter defenders in the game. It makes sense for both sides.

Al Horford from the Philadelphia Sixers

Let me be clear about one thing. If the Warriors were to take Horford and his four-year, $109 million contract off Philadelphia’s hands, they’d then have to acquire at least one valuable first-round pick. Horford has been downright atrocious in his first season with Philadelphia. He’d simply be a piece to make the money work and could act as a score-first bench option.

Under this scenario, Philadelphia sends its first-round pick (from Oklahoma City in 2020). It adds a defensive-minded big to go with Joel Embiid. It’s something Philadelphia has been seeking for some time now.

Rudy Gobert from the Utah Jazz

On the other end of the ledger, Golden State would have to bulk up its offer to Utah for Gobert. That would likely include sending its first-round pick in 2020 for this All-Star center and potentially Utah’s second-round selection (originally acquired from the Warriors).

It would be the Warriors’ way of going all in with Stephen Curry, Klay Thompson and Andrew Wiggins moving forward. Whether Gobert could even be had in a trade remains to be seen. However, a rift with teammate Donovan Mitchell following the COVID-19 drama lends some credence to the idea. This is complicated by the fact that Utah could get a better player than Green for Gobert. Could a top-three pick from the Warriors convince Utah on this NBA blockbuster trade?

Tim Hardaway Jr. and Justin Jackson from the Dallas Mavericks

A bloated contract and an under-performing former lottery pick for Green? More than anything, this would be a cost-cutting move for the Warriors with an eye on free agency following the 2020-21 season. Hardaway’s four-year, $71 million contract expires after next season. Green is owed $77-plus million after that.

Dallas would likely have to sweeten the pot by offering up at least one first-round pick in exchange. It doesn’t currently have that ability after the Kristaps Porzingis trade, so Mark Cuban would have to make a separate move before acquiring another star to go with Porzingis and Luka Doncic.

On the surface, it seems like these hypothetical deals are vastly different in nature. That’s just on the surface. It really depends on what direction Golden State wants to go this offseason and just how much other teams value Green. As noted, he seems to have a nice amount of value.

The Warriors have a core three with Curry, Thompson and Wiggins. They also have a youngster, Eric Paschall, ready to take over for Green. Add in the draft pick assets they acquired in the D’Angelo Russell deal as well as the $17-plus million Andre Iguodala trade exception, and there’s numerous opportunities for Golden State to improve.

It will be interesting to see in what direction general manager Bob Myers and Co. go once the 2019-20 season is completed.