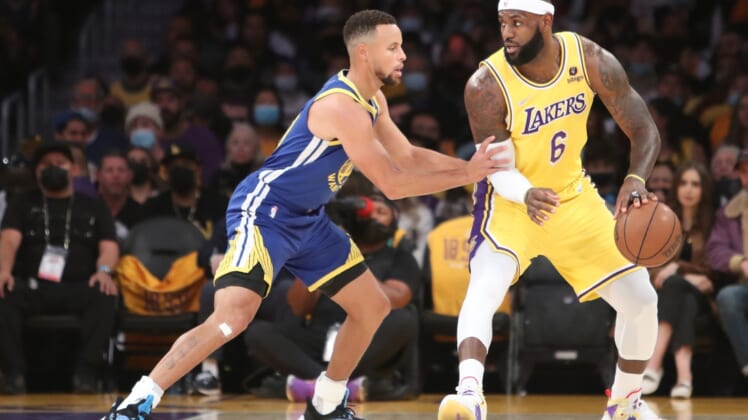 Stephen Curry recorded a triple-double and Nemanja Bjelica logged a double-double in his Golden State debut Tuesday night as the Warriors stunned the host Los Angeles Lakers 121-114 on opening night.

Curry finished with a team-high 21 points despite 5-for-21 shooting, and he added 10 rebounds and 10 assists. Jordan Poole poured in 20 points for the Warriors.

Golden State’s bench, led by Bjelica’s 15 points and 11 rebounds, outscored its Los Angeles counterparts 55-29 as the Warriors avenged a loss to the Lakers in the NBA’s new play-in tournament last season.

LeBron James led all scorers with 34 points and Anthony Davis had 33 for the Lakers, who were unable to flip the switch on the regular season after going 0-6 in the preseason.

The Lakers led by as many as 10 and were on top 90-89 after a James 3-pointer with 9:37 to play before the Warriors took command for good with a nine-point run that opened a 98-90 advantage. Poole hit two hoops and Otto Porter Jr. sank a 3-pointer in the burst.

The Lakers got back within two on a pair of subsequent occasions, but both times Golden State countered immediately with a 3-pointer, the second time when Bjelica buried his only long-range attempt of the night.

Golden State went on to lead by as many as 12 before coasting home.

Bjelica signed with the Warriors as a free agent after having played last season for the Sacramento Kings and Miami Heat.

James and Davis collected 11 rebounds apiece to notch double-doubles for the Lakers, who were hosting their Northern California rival on Opening Night for the first time since 1982.

Making his Lakers debut, Russell Westbrook shot just 4-for-13 and was limited to eight points, five rebounds and four assists.

Davis (20) and James (18) combined for 38 first-half points, while Curry missed eight of his first 11 shots, but Golden State, despite falling back by as many as 10, managed to stay within 59-53 at halftime.

Iguodala and Bjelica kept the Warriors in the game, hitting six of their seven shots and combining for 14 points before the break. Curry led Golden State at that point with 10.