Atlanta’s Clint Capela posted his team-leading 11th double-double with 20 points and 15 rebounds and the Hawks beat the visiting Charlotte Hornets 115-105 on Saturday for their fourth straight win.

Capela was 10-for-11 from the field and blocked two shots to help the Hawks draw to within one win of the .500 mark through 17 games.

The Hawks improved to 7-1 at home and have won 14 straight home games against Eastern Conference opponents, one shy of matching the franchise record.

Charlotte’s Miles Bridges scored a career-high 35 points on 15 of 28 shooting, with 10 rebounds and three assists. LaMelo Ball had a triple-double with 15 points, 10 rebounds and 11 assists, and Cody Martin came off the bench to get 14 points and eight rebounds.

The loss ended Charlotte’s five-game winning streak. The Hornets have split three back-to-backs and been swept once. They are 0-4 in the second game of that situation.

After finishing the first quarter with a 25-21 lead, the Hawks used their second unit to open a double-digit lead, eventually leading by as many as 17. Atlanta led 60-48 at halftime and maintained the 12-point lead to take an 89-77 advantage into the fourth quarter. 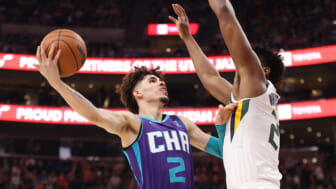 Atlanta had to survive a fourth-quarter run, however. Charlotte made it a four-point game when Bridges scored on a layup with 1:18 remaining. But the Hawks got 3-pointers from Kevin Huerter and Cam Reddish to make it 112-103 with 38.9 seconds remaining, and Young iced it with a pair of free throws.

It was the first meeting between the clubs this season. Charlotte won last year’s series 2-1.

Charlotte plays the second leg of its three-game trip on Monday at Washington. The Hawks complete their five-game homestand on Monday against Oklahoma City.