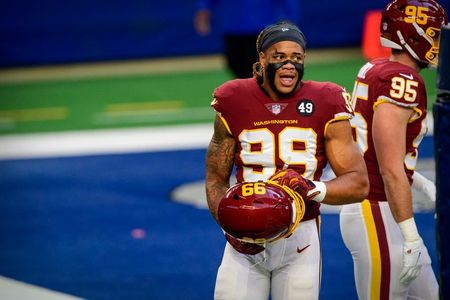 Antonio Gibson rushed for three touchdowns Thursday, the second coming after an ill-fated fake punt by the Dallas Cowboys deep in their territory, as the Washington Football Team climbed into first place in the NFC East with a 41-16 win at AT&T Stadium in Arlington, Texas.

Gibson collected 115 yards on 20 carries as Washington improved to 4-7, passing Philadelphia (3-6-1) for the division lead. Quarterback Alex Smith completed 19 of 26 passes for 149 yards with a touchdown and an interception.

Andy Dalton connected on 25 of 35 attempts for 215 yards with a score and a pick that was returned 15 yards for a touchdown by Montez Sweat with 3:24 left in the game. That capped a stretch of three Washington scores in nine minutes.

Dallas initiated scoring with the first of three Greg Zuerlein field goals, a 33-yarder at the 8:30 mark in the first quarter. But Washington took a 7-3 lead with 1:37 left on Gibson’s 5-yard touchdown run, capping a 12-play drive that featured a 28-yard pass from tight end — and former college quarterback — Logan Thomas to Terry McLaurin.

Dalton put the Cowboys ahead 10-7 when he hit Amari Cooper in stride behind cornerback Ronald Darby for a 54-yard scoring strike 52 seconds into the second quarter. Washington tied it seven minutes later on Dustin Hopkins’ 23-yard field goal.

Thomas caught a 5-yard touchdown pass from Smith with 2:26 remaining in the half, and Zuerlein drew Dallas within 17-13 on a 32-yard field goal 19 seconds before intermission.

Hopkins converted a 36-yard field goal, six plays after Ezekiel Elliott lost a fumble via replay review, just over four minutes into the third quarter. Zuerlein hit from 28 later in the period, but the Cowboys started the drive on the Washington 4 after a 43-yard interception return by Jaylon Smith.

Dallas fell into the division cellar at 3-8.