The Washington Football Team is making some news with training camp getting going around the NFL. According to multiple reports, Washington signed star defensive tackle Jonathan Allen to a massive contract extension.

Allen’s reps over at the Institute for Athletes notes that the deal is worth $72 million over four seasons. This deal ties the former Alabama star with Grady Jarrett of the Atlanta Falcons as the sixth highest-paid defensive tackle in the NFL.

One of the anchors on an elite-level Washington Football Team defensive line, Allen has registered 45 quarterback hits and 17 sacks over the course of his four-year career. The 26-year-old former Crimson Tide standout was the 17th pick in the 2017 NFL Draft. 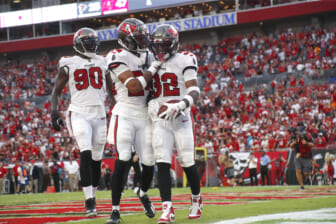 The hope here for Washington is that Allen continues to be a force on the interior of the team’s defensive line. He joins in with the likes of Daron Payne, Montez Sweat and reigning NFL Defensive Rookie of the Year Chase Young in forming an elite foursome in D.C.

Coming off a surprise NFC East title in 2020, Washington is expecting big things this season. While it did add quarterback Ryan Fitzpatrick to the mix, the defense is what’s going to lead this squad to playoff contention in 2021.