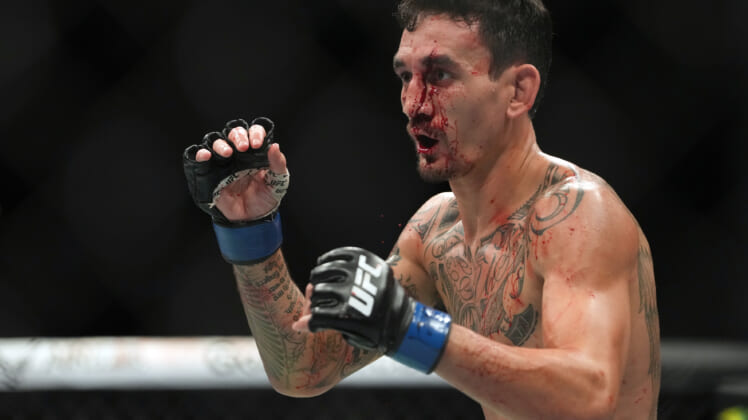 The UFC 276 results offered up several wild finishes and major moments at the top of a few divisions.

The card from inside Las Vegas’ T-Mobile Arena was led by two title fights. In the co-main event, featherweight legend Max Holloway looked to finally score a win over reigning champion Alexander Volkanovski in a trilogy fight between the two pound-for-pound stars. The third time was not the charm as the champ out skilled “Blessed” for all five rounds for a unanimous decision win.

In the night’s headliner, middleweight superstar Israel Adesanya looked to defend his belt for a fifth straight time when he took on the challenge of UFC veteran Jared Cannonier. Just like all the pretenders before, Adesanya once again proved an unsolvable puzzle as he beat “The Killa Gorilla” by unanimous decision.

The mega card on ESPN and ESPN+ also featured a highly-anticipated middleweight clash between Sean Strickland and former kickboxing star Alex Pereira. As well as the return of fan favorites in Sean O’Malley, Donald Cerrone, and Robbie Lawler.

Let’s take a look at some of the biggest winners and losers from the UFC 276 results on Saturday night.

Of course, a finish would have been nice but so many of Adesanya’s opponents fight carefully to respect the elite-level gifts of the champ. And they don’t serve up too many mistakes for the counter puncher to jump on. Cannonier did not threaten the champ whatsoever and didn’t risk it all with a hail mary attempt for the win in the fifth. “The Last Stylebender” remains head and shoulders above the rest of the middleweight division.

After title defense five, the most likely option next for Adesanya probably will be his great rival from the world of kickboxing, Alex Pereira.

Max Holloway is one of the greatest featherweights in MMA history. But tonight furthered what many tried to deny, that while a legend he is not the best 145-pounder ever. Alexander Volkanovski is that man. Holloway has beaten many of the top stars in the division but has now lost three straight times to Volkanovski. If he chooses to fight on, maybe a long-overdue move up to lightweight is necessary at this juncture in his career.

There is no other way to say it, Alex Pereira completely crushed Sean Strickland on Saturday. Strickland talked a big game and fought foolishly. Looking to stand with a man who knocked out Israel Adesanya and not taking it to the mat immediately was a decision that bit him with a vicious left hook. It is hard to make a case that Pereira is not next in line for a title fight.

Five years ago, Robbie Lawler would have blown through Bryan Barberena. However, this is ain’t 2016, it’s 2022 and Lawler is nowhere near that guy anymore. He showed early flashes of that in his UFC 276 results, but that disappeared and he was overcome by the wave of grit and volume from Barberena. He has lost five of his last six — this being maybe the worst of the bunch — and his one win was against a badly aged Nick Diaz. It is unclear where Lawler goes next in the Octagon at 40 years old and declining quickly.

Jalin Turner is an absolutely dangerous man at lightweight. After a rough patch when he lost two of three to start his UFC career, he has since run off five straight victories, all finishes, including his 45-second submission win over Brad Riddell on Saturday. He is only 27 and should be recognized as a top rising star at 155-pounds and a fighter deserving of name opposition in his next fight.

O’Malley vs Munhoz was one of the most anticipated fights at UFC 276 and will go down as the most disappointing. Both chose to go with a counter-punching strategy and it led to a lot of staring and pawing for much of the fight. Not to mention, “Sugar” did not look that good as he made multiple fouls, including the fight-ending eye poke. Considering how lackluster the bout was it doesn’t seem like one that needs to be run back and both men should go in a different direction.

Jim Miller got sweet revenge in his UFC 276 results. Eight years after the first encounter, “A-10” got a second crack at UFC great Donald Cerrone and he sent him early with a second-round submission. A perfect flip-side for the grappler after being knocked out in the pair’s first fight in 2014. He has now won two straight and will continue his over 40-fight UFC tenure. Amazing.

Donald Cerrone’s career in MMA is officially over. Unfortunately for the legendary “Cowboy,” his final years will have many remembering him as a fighter who held on much longer than he should have. He will go down as a beloved UFC figure, but in going winless in his last seven Octagon appearances he adds his name to a long list of MMA greats who had very rough ends to their runs in the sport. Nevertheless, Cerrone had a fantastic career.

While Andre Muniz’s win on Saturday was not as sensational as his last three, it was still another key moment in his continued growth as a fighter with championship potential. At the highest levels of the sport, you are going to have to really work for some wins, and Uriah Hall made him do that for three rounds. However, the Brazilian battled through and dominated at times en route to a ninth straight win — fifth consecutive in the UFC. Expect Muniz to get a top-10 level foe in his return to the Octagon.