Tuukka Rask eyes return in late December, but only with Boston Bruins

Tuukka Rask is forecasting a potential return from hip surgery as early as late December, and he only wants to suit up with the Boston Bruins.

“I’ll be ready to go probably around Christmas time, January,” Rask said. “So hopefully I can start skating here in a month and a half or so and then progress from there and be ready to go in January.”

Rask has played his entire career with the Bruins, and he doesn’t envision wearing another NHL uniform.

“I played with one team when I was in Finland (Ilves Tampere), I have been so lucky to be part of only one team in the NHL,” Rask said. “For me, it’s about that pride of playing for one team and one team only. I have no reason to chase the money anymore and go somewhere else. It’s going to be one of those things where the Bruins are my home, Boston is my home. I’ve always wanted to play here, wanted to stay here. So the money won’t be an issue. We had a conversation with (Bruins general manager Don Sweeney) and I will be a cheap goalie for them.” 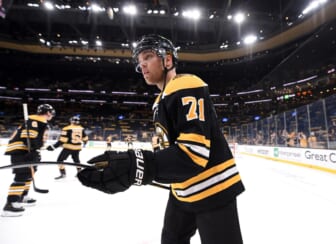 He started all 11 playoff games for the Bruins, whose season ended in the second round with a loss to the New York Islanders in Game 6 of the series.