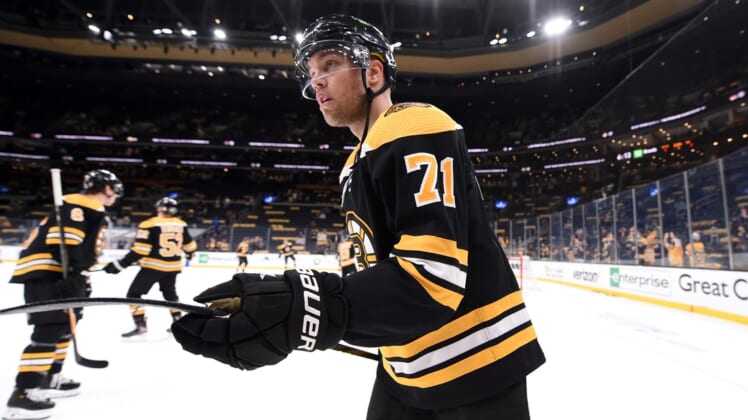 May 21, 2021; Boston, Massachusetts, USA; Boston Bruins left wing Taylor Hall (71) skates during warmups prior to game four of the first round of the 2021 Stanley Cup Playoffs against the Washington Capitals at TD Garden. Mandatory Credit: Bob DeChiara-USA TODAY Sports

Hall, 29, was in line to become an unrestricted free agent on Wednesday prior to signing the deal.

He recorded 33 points (10 goals, 23 assists) in 53 regular-season games with the Buffalo Sabres and Bruins last season. He had 14 points (eight goals, six assists) in 16 games following the trade on April 12.

“The Bruins are excited that Taylor wanted to remain a Boston Bruin and we are thrilled to have signed him to a multi-year contract,” Boston general manager Don Sweeney said. “He is an impact player that brings speed, scoring, skill and two-way commitment to our lineup. He fit seamlessly into our locker room and will be an integral part of our organization’s goal to compete for the Stanley Cup.”

Hall was the league MVP for the 2017-18 season after posting career-high totals in goals (39), assists (54) and points (93) while leading the New Jersey Devils to their first appearance in the Stanley Cup playoffs since 2012.

“I’m not looking to absolutely maximize my value at this point in my career,” Hall said last month. “I’ve been fortunate enough to make some good money in this league and at this point it’s about more of a fit for me than maybe money or a long-term thing. You want to find a home for the next few years here.”