Miami Dolphins QB Tua Tagovailoa stretchered off the field after with neck injury, taken to hospital 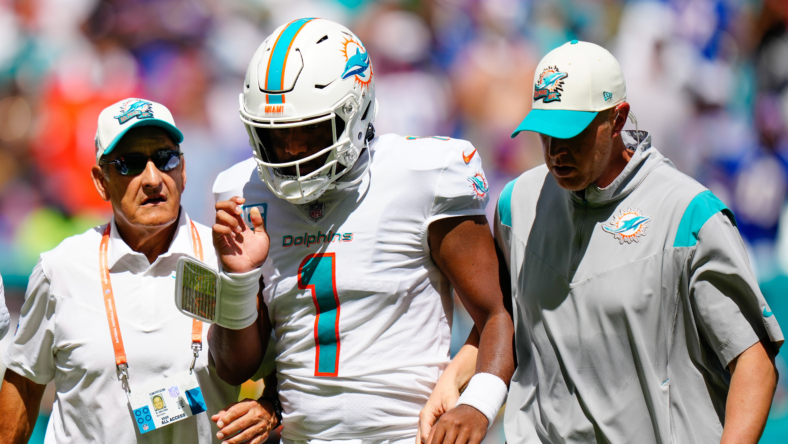 Update: Amazon Prime reported following Thursday’s game that Tua Tagovailoa will be released from the hospital later in the night and will travel back to Miami with the rest of his Dolphins team.

Miami Dolphins quarterback Tua Tagovailoa entered Thursday’s game against the Cincinnati Bengals dealing with injuries to both his back and his neck. The early-season MVP candidate was questionable heading in, but was active for kickoff.

Unfortunately, Tagovailoa would not finish the game. He was on the receiving end of a brutal hit from Cincinnati Bengals defensive tackle Josh Tupou in the second quarter.

Tua was seen on the field without much movement before he was ultimately stretchered off the field with Dolphins players standing around him. As you will see in the video below, Tua’s hands were in an awkward position after the hit. Watching the Amazon Prime broadcast, it was noted that it’s a neurological response to head trauma.

The good news here is that Tua Tagovailoa was seen giving a thumbs-up signal to fans in Cincinnati as he was taken off the field. The bad news? This looks to be a fairly significant injury.

Tua exited last Sunday’s game against the Buffalo Bills with a head injury. He returned in the second half after undergoing an in-game concussion test. Immediately after the game, the NFLPA announced that it was planning on opening an investigation into the protocols that led to Tua returning to the game.

“The NFLPA, the NFL Management Council or any player involved in an alleged failure by a club employee or other member of a club’s medical staff to follow any of the mandatory steps required by the NFL’s Concussion Checklist shall each have the right (independently or collectively) to bring forward a complaint about such alleged failure to the Representatives, which complaint shall be submitted in writing.”

As for what happened Thursday evening in Cincinnati, Tua was immediately ruled out for the remainder of the game. Miami announced that he has been taken to a local hospital with injuries to his head and neck.