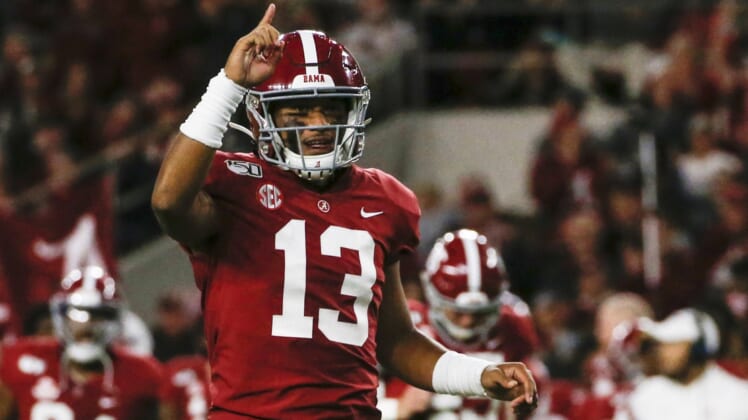 Saban opened up the presser by lauding Tagovailoa’s contributions to the Alabama football program, both on and off the field, and highlighting his academic achievements before introducing the quarterback to the podium.

Tua Tagovailoa approached the podium, walking without a crutch, and then announced his decision to declare for the NFL Draft.

A two-time Heisman finalist, Tagovailoa’s decision caused ripples across the nation, both at the collegiate and NFL levels. Even though he won’t even start throwing until this coming spring due to the season-ending hip surgery he underwent in November, Tagovailoa should be ready to get into the swing of an NFL training camp this coming summer.

Prior to his decision, Tagovailoa shared his thought process on potentially returning to Alabama.

“If I come back, the risk is, what if I get hurt again?” he said, per ESPN. “But the reward could be maybe I jump back to the top of the charts, the boards for all these teams.”

Injuries are the big red flag for Tagovailoa going forward.

He broke his finger in the spring of 2018, hurt his knee in 2018, had a quad injury that kept him out of a game in 2018, suffered injuries to both ankles, requiring minor surgical repairs, and of course, he is recovering from a season-ending hip injury that required emergency surgery.

Despite all that, Tagovailoa’s talent is tantalizing.

In three seasons at Alabama, Tagovailoa continually proved he was one of the most electric quarterbacks in college football. Showing off rare accuracy, he completed 69.3% of his passes over 32 games for 7,442 yards with 87 touchdowns and just 11 interceptions.

Assuming his rehab continues to go well and he stays on his timeline to begin throwing this spring, Tagovailoa should be a first-round pick this April, if not a top-10 pick.