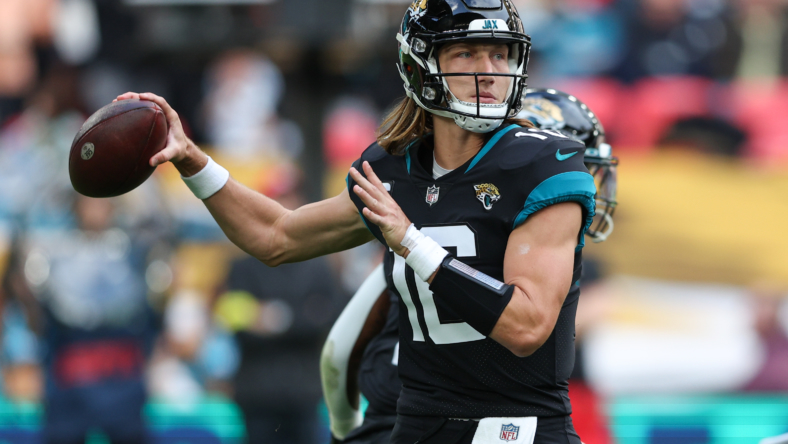 Many were excited for Jacksonville Jaguars quarterback Trevor Lawrence to get a fresh start in 2022 with head coach Doug Pederson. After the disastrous Urban Meyer era, Pederson represented a quarterback whisperer who would unlock a generational talent and help turn around this franchise.

Things looked promising through the first three games. Lawrence played a central role in beating the Indianapolis Colts and Los Angeles Chargers, helping Jacksonville look like the best team in the AFC South and an emerging playoff contender

It looked like the Jaguars finally had a face of the franchise and Lawrence’s continued improvement would help him ascend NFL quarterback rankings. Instead, Jacksonville and its biggest star are spiraling out of control.

In a 29-21 loss to the Philadelphia Eagles, Lawrence committed five turnovers and only completed 47.8% of his passes. He then threw just one touchdown pass over his next three games, all losses with the Jaguars combining for 16.6 PPG.

Facing a struggling Denver Broncos team making an unfamiliar trip to London, Lawrence and the Jaguars seemed to be at a distinct advantage in Week 8. With an opportunity to take a two-score lead on Sunday morning, Lawrence committed another rookie-level mistake.

Speaking to reporters on Monday after reviewing the film from the 21-17 loss, Pederson acknowledged Lawrence’s poor accuracy. However, the Jaguars’ head coach seemed to excuse the decision to throw the ball despite how reckless most believed it to be.

“The thing you look back and say is you put it in a spot where only your guy can get it, and if he catches it, great, touchdown; if not, it’s incomplete. Probably obviously not the best location for the ball there…But really don’t think that it was necessarily the wrong decision, just didn’t throw a good ball and didn’t keep it away from those guys on the goal line.”

Unfortunately for the Jaguars, Lawrence’s issues with inconsistent accuracy and poor decision-making are recurring problems. Even more alarming, they are most apparent in critical situations.

Coming out of the 2021 NFL Draft, many viewed Lawrence as the best quarterback prospect since Andrew Luck. A consensus generational talent, evaluators raved about his pinpoint accuracy, physical talent and leadership.

However, some of the red flags – decision-making and poise under pressure – are becoming more apparent in the NFL. As highlighted by data from Pro Football Focus.

A majority of NFL quarterbacks are far worse under pressure than when standing in a clean pocket, it’s obvious. However, Lawrence’s lack of improvement from 2021 to ’22 is a concern.

Even more worrisome for the Jaguars is the fact that the face of the franchise encounters the most trouble in key situations.

All of these situational problems have proved costly during the team’s five-game losing skids and it’s resulted in a steep decline since Lawrence’s hot start.

After another poor performance, Pederson also acknowledged that Lawrence needs to be smarter about when he makes aggressive decisions with the football.

“We just got to continue to teach it and coach it. Listen, I’m not gonna take the aggressiveness away from Trevor, I love that part about him but, at the same time, we’ve got to be smart.”

There is still time for the coach and quarterback to work things out, fix some of the issues and then show promise in the second half of the season. After 25 career games, though, it’s apparent Lawrence isn’t the once-in-a-generation player everyone believed.