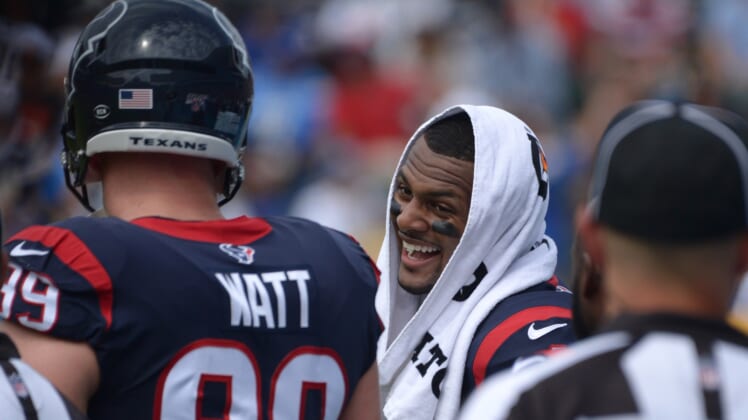 The first day of NFL Playoff action did not disappoint. It started with the Houston Texans winning in comeback fashion against the Buffalo Bills. Deshaun Watson is a wizard.

Later in the day, the Titans came out on top over the Patriots in another close game. Said loss might end the Tom Brady tenure in New England.

The AFC Wildcard playoffs were wild on Saturday. They lived up to their nickname. It’s in this that we give you the top takeaways from the two tightly-contested affairs.

Bill O’Brien is still a problem in Houston

As has been the case during his six-year tenure in Houston, situational coaching was once again a major struggle for O’Brien. That included him going for it on fourth-and-1 up by three points late in the fourth quarter. A field goal would have forced Buffalo to score a touchdown.

Instead, the Bills drove the ball down the field to force overtime in the final seconds. Despite the walk-off overtime win, we’re not too confident that O’Brien will be up to the task moving forward in the playoffs.

Making his initial NFL postseason start, this second-year quarterbak came out on fire. That included a season-long run for the Bills and a beautiful 16-yard touchdown catch to put the team up.

Unfortunately, it was downhill from there for the youngster. Allen continued to struggle with accuracy as the game progressed. He held on to the ball too long. While this did not impact Buffalo in the first half, it cost the team big time after halftime.

This included Allen losing a fumble, taking two consecutive absurd sacks and being called for intentional grounding on third and long. These are the mistakes Buffalo can’t afford moving forward. They are the mistakes head coach Sean McDermott and Co. hope Allen rectifies in the offseason.

Deshaun Watson sure the heck is

Watson was absolutely horrible in the first half of Saturday’s AFC Wildcard game. In fact, he threw for less than 50 yards and did not connect with DeAndre Hopkins once during that span.

Sure a lackluster Texans offensive line played a role in this. But Watson deserved some of the blame. Then, something clicked big time after a tide-turning sack from J.J. Watt. Watson absolutely dominated once his team found itself down 16-0.

We’re talking about a brilliant 20-yard touchdown run to pull within eight. With Houston looking to win the game in overtime, Watson came through with some witchcraft unlike anything we’ve seen before — avoiding multiple sacks to set up the game-winning score.

Watson finished the evening having tallied 300-plus total yards and two touchdowns while completing 20-of-25 passes. He did so while taking seven sacks behind a horrible offensive line performance. Never underestimate this kid again.

Buffalo has a tremendously bright future

Sure the Bills have not won a playoff game since Bill Clinton was manning the White House. In no way does this mean Sean McDermott’s squad doesn’t have a bright future.

We saw this first-hand with Buffalo taking a 16-0 second-half lead. And while the offense struggled, one of the league’s best defenses continued to do its thing. That included seven sacks of Deshaun Watson and cornerback Tre’Davious White going tit-for-tat with fellow All-Pro DeAndre Hopkins.

These Bills will be heard from in the AFC for years to come. What they did during the regular season and how they showed up Saturday magnified this even further.

Did we just see the end of the Patriots’ dynasty?

The reports have been widespread in nature. Due to conflicts with his contract and the Patriots’ unwillingness to commit to Tom Brady long term, the six-time Super Bowl champ might opt for another NFL city next season.

In absolutely shocking fashion, New England fell at Gillette Stadium to the Titans on Saturday night. Brady could not lead the late-game comeback. It’s a continuation of struggles we saw from the future Hall of Famer during the regular season. That included a game-ending pick-six after another one fell through the cracks.

One now has to wonder if the Patriots’ dynasty is finally over after two decades of domination. Only time will tell on that front. For now, the defending champs have been unseated in the wildcard round.

The former Heisman winner concluded the regular season with the NFL rushing title. Taking on a stout Patriots defense Saturday night, Henry more than lived up to that billing.

He gashed New England’s defensive front for 204 total yards on 35 touches, helping out a struggling Ryan Tannehill in the process. It was one of those performances that will be remembered for eons. And it sets up a titanic clash against Lamar Jackson and the Baltimore Ravens next week.

Ryan Tannehill will have to be better

Let’s face it. Tennessee took on a limited Patriots offense Saturday night. It’s in this that the team was able to go run-heavy against New England. Even then, Tannehill’s performance after a remarkable regular season was not up to par.

The former Miami Dolphins starter completed just 8-of-15 passes for 72 yards against a stout Pats defense. This simply won’t cut it moving forward in the playoffs, especially against the Ravens next week.

Half of the divisional round is set

Next week’s AFC Divisional Playoff action will include the Titans going up against the Ravens in Baltimore and Houston taking on Kansas City at Arrowhead. It’s pretty much what most people wanted to see given how these teams ended the regular year.

It’s also pretty obvious that Baltimore and Kansas City will be heavy favorites next week. However, we would not put it past one or both of the home teams pulling off the road upset.