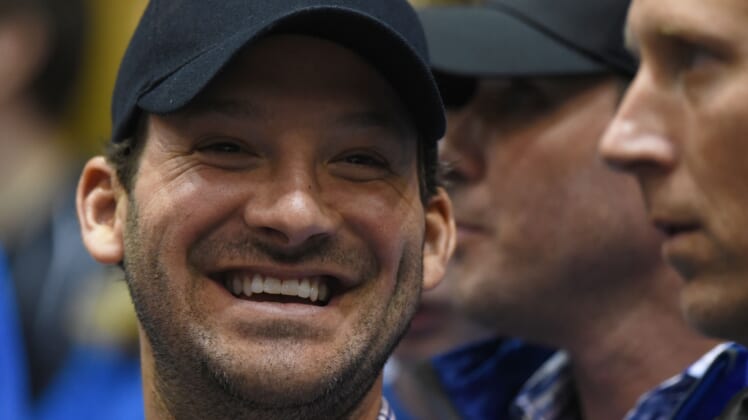 Tony Romo spent his entire 13-year NFL career with the Dallas Cowboys and never experienced free agency. Now, as the NFL’s most popular broadcaster prepares to hit the open market for the first time, Romo is having fun teasing fans about his potential destination.

CBS took a chance on Romo working in the broadcast booth following his retirement in 2016. He instantly became the network’s lead color analyst for the 2017 NFL season and he was immediately a hit. After three years at CBS, he’s now the most coveted sportscaster ever.

During an interview on The Ben and Skin Show, Romo talked about the process of being a free agent then teased everyone about his future in the broadcast booth.

“I think I’m already there a little bit, but we’ll see how it plays out, even though I think I already know, but I’m just not telling you guys,” Romo said, laughing, via 97.2 The Eagle.

Of course, Romo might have a hint at where he’ll end up because CBS can match any offer he receives. So if ESPN offers him an eight-figure deal to become the network’s color analyst for Monday Night Football, CBS can match it. If Romo returns to CBS for the 2020 season, it gives him an opportunity to be a part of its Super Bowl LV broadcast.

Given the 39-year-old is just starting his broadcasting career, this likely won’t be the first time he will get record-breaking contract offers.

After seeing the success Romo has accomplished in television, it wouldn’t be a surprise if Drew Brees and Jay Cutler move into the broadcast booth in the next few years.