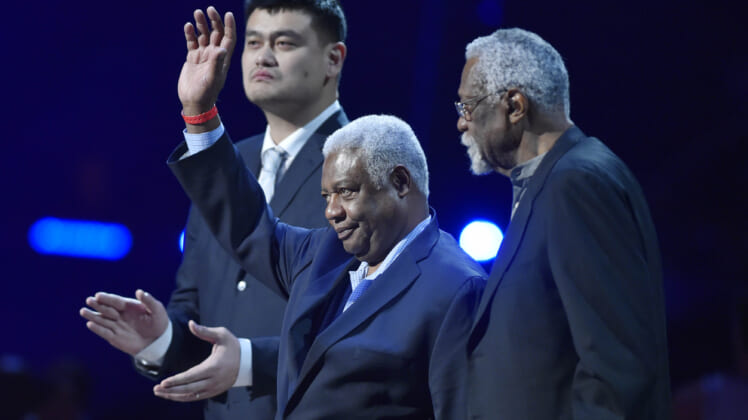 Who is the tallest NBA player of all time? We’re talking about basketball being a game of height. Some of those on this list made no real impact on the Association. Others were pretty solid during their careers. Meanwhile, there’s one Hall of Famer who stands at 7-foot-6.

Below, we look at the tallest NBA player of all time with a focus on nine others who had a distinction of towering over their opponents.

How tall is Boban? About nine inches taller than a 2020 Ford F-350. Not kidding. That’s an actual thing. Unlike some others on the list of tallest NBA players ever, this Serbian has actually had a nice amount of success.

Back in 2018-19 with the Philadelphia 76ers and Los Angeles Clippers, he averaged 7.3 points and 4.6 rebounds on 62% shooting from the field. Now a member of the Dallas Mavericks, Marjanovic’s career continues to go swimmingly. That’s somewhat crazy given his awkward 7-foot-4, 291-pound frame.

Bhullar might not be the tallest NBA player ever, but he’s likely among the most random. Here’s a dude who played all of three games with the Sacramento Kings in 2014-15 — averaging 0.7 points in one minute of action per outing.

At 7-foot-5 and 359 pounds, the Canadian born New Mexico State product is actually still playing overseas for Guangxi Rhino of the National Basketball League in China.

What can we compare to Tacko Fall’s height? That’s one inch taller than the legendary Andre the Giant and less than a foot shorter than the tallest person in the world right now, Turkey’s Sultan Kösen.

Fall has been somewhat of a cult figure since his days at Central Florida. However, it has not translated to a ton of success in three NBA seasons. Fall is averaging just a hair over two points per game in stints with the Boston Celtics and Cleveland Cavaliers. This season, he averaged 1.1 points in 11 games with Cleveland before being sent down to the G-League.

At 7-foot-5 and 305 pounds, this Russian remains an intimidating figure. Despite a lack of success in the NBA, his professional career lasted nearly two full decades with Podkolzin suiting up for both the Russian National Team and Russian Super League.

In the NBA, he suited up for all of six games during a two-year run with Dallas — averaging 0.7 points and 1.5 rebounds in 4.6 minutes of action per. Interestingly enough, he was selected by Utah in the first round of the 2004 NBA Draft and promptly traded to Dallas for a 2005 first-round selection.

This former third-round pick of the Rockets played in a total of 155 games over his nine seasons in the NBA, averaging 1.6 points and 1.5 rebounds per outing. This is a sign that the 1980s and 1990s iteration of the Association valued tall NBA players.

Despite his career being less than noteworthy, Nevitt was a member of the Lakers 1985 NBA championship team. That playoff run saw him appear in seven postseason games, including a six-point outing against the Denver Nuggets in the Western Conference Finals. It’s the very same game that saw Los Angeles win by 44 points with Magic Johnson dishing out 19 assists.

The tallest NBA player during his time with the Rockets, Ming was selected No. 1 overall back in 2002, this Chinese legend ended up being inducted into the Basketball Hall of Famer after a brilliant eight-year career in Houston.

This span saw Ming earn an All-Star appearance each season he suited up. He was also named first-team All-NBA player five different times during a career that saw Ming average 19.0 points and 9. rebounds on 52% shooting.

Slavko Vranes has the distinction of playing just one NBA game as a member of the Portland Trail Blazers back in 2003-24. Said game saw the Serbian play three minutes while failing to hit on his only shot attempt.

He’s one of those international players who never translated to NBA play. Overseas, he’s seen action in Italy, Iran, Serbia, and Turkey. 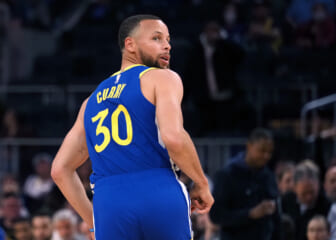 Shawn Bradley’s claim to NBA fame is the fact that he was the No. 2 pick of the Philadelphia 76ers back in 1993, sandwiched in between all-time greats such as Chris Webber and Penn Hardaway. Philadelphia head every reason to believe Bradley would work out well. He averaged 14.8 points and 7.7 rebounds on 52% shooting in his only season with BYU.

It never came to fruition for one of the tallest white basketball players ever. The dude averaged under 10 points to go with 7.5 rebounds in three seasons with Philadelphia before being dealt to the Nets for Derrick Coleman. He was then moved to the Dallas Mavericks in a nine-player blockbuster later in 1997 involving Sam Cassell. Surprisingly, Bradley lasted nine seasons with Dallas before retiring following the 2004-05 campaign.

A fifth-round pick of the San Diego Clippers (those were things) back in 1985, Bol’s career was defined by injuries. Despite being tied with Muresan the tallest NBA player ever, Bol weighed a mere 200 pounds. To put this into perspective, 6-foot-1 Toronto Raptors guard Fred VanVleet weighs about the same.

Throughout his lengthy career in the Association, Bol averaged a mere 2.6 points per game. However, he did lead the league in blocks two times. In his second-to-final season in the NBA, Bol played a total of 14 games with three different teams. He ended his career in a five-game stint with the Golden State Warriors back in 1994-95. Tragically, Bol passed away at the young age of 47 back in 2010 due to acute kidney failure and complications from Stevens–Johnson syndrome.

Perhaps best known for his role in “My Giant” with Billy Crystal all the way back in 1998, the Romania native actually carve out a decent career for someone his size in the NBA. He put up a career-high 14.5 points and 9.6 rebounds while leading the NBA in field goal percentage (58%) for Washington back in 1995-96.

Unfortunately, and as is the case with a ton of the tallest NBA players in history, an injury derailed Muresan’s career. He suffered injuries to his knee and back in 1997 and was never the same. Some trivia here, too. Back in 2007 while playing for the Maryland Nighthawks of the now-defunct Atlantic Coast Professional Basketball League, Muresan was part of the tallest lineup in professional basketball history. That included the 7-foot-9 Sun Mingming.