College football is straight-up unpredictable. If you’re looking to bet on it, best of luck to you, because this 2021 season has been absolutely insane and illogical so far. Just when you think you know something, it’s abruptly proven false.

That’s why it’s so valuable to reflect on the biggest takeaways from Saturday’s games, because at this point, the top-25 polls will need a serious overhaul each week.

Alabama isn’t quite as good as everyone thought

As it turned out, the notion that Florida was dead in The Swamp’s water in the first half was an ill-fated, premature hot take, because the Gators gave the Alabama Crimson Tide all they could handle in Gainesville in a 31-29 loss.

Rallying from a 21-3 deficit through one quarter, the hosts tightened the screws on defense, and absolutely ran the ball down Alabama’s throat for 245 yards. Florida dominated the line of scrimmage, especially on offense, which is a jarring thing to see for a Nick Saban-coached team.

So often it feels like the field is slanted in the Tide’s favor, like an inevitable wave that will wash away anyone in their path. The Gators proved they can hang, and to his credit, Emory Jones overcame several poor throws with some absolute dimes and better decision-making than he showed in his first two starts of 2021. 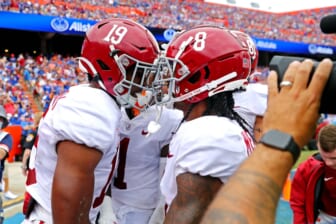 The presumptive No. 1 overall draft pick and Heisman Trophy front-runner entering the season, Oklahoma Sooners quarterback Spencer Rattler is not playing to that status at all right now.

Baffling throws into double- and triple-coverage, sloppy mechanics and an overall hesitation to his playing style have all contributed to Rattler getting, well, a bit rattled to begin 2021. The expectation is for Oklahoma to make the College Football Playoff. Rattler and the Sooners managed only 23 points against Nebraska in Week 3.

That 23-16 close call against the Cornhuskers is definitely a red flag, as Oklahoma let Tulane hang around in the season opener and only won that contest 40-35. Rattler may have been feeling himself a little bit listening to all the hype. It’s time to go to work, grind the tape, stop throwing into coverage and playing to that high-caliber potential.

A little pun of a headline here, because we’re talking about the Michigan Wolverines and the Michigan State Spartans.

Jim Harbaugh faced a lot of scrutiny entering 2021, and if he fails to beat Ohio State yet again, the criticism won’t relent. For now, though, Michigan is crushing its competition en route to a 3-0 start, capped by a 63-10 romp over Northern Illinois today.

Wolverines tailback Blake Corum has already run for 407 yards this season. For the first time in years under Harbaugh, Michigan seems to have an offensive identity. With tons of experience on defense, led by star edge defender Aidan Hutchinson, this Michigan team is giving fans something to really cheer about. 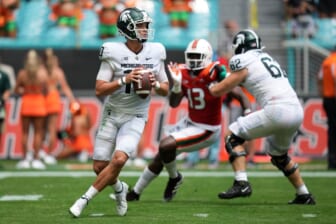 Meanwhile, Mel Tucker is really helping Sparty flourish in East Lansing. Michigan State blew the doors off the AP 24th-ranked Miami Hurricanes 38-17 on the road. It was one of college football’s biggest statement wins from Saturday’s slate.

The Spartans are 3-0, and could really play spoiler when they face Ohio State and Penn State to finish their schedule.

I mean, sure, that might as well happen, right? Such is the current state of the college football landscape.

Slipper may not fit for playoff Cinderellas

Adversity strikes for any team in any season, but neither the Chanticleers nor the Bearcats did particularly well on Saturday in their respective showcases against decent-but-not-great opponents.

On the road at Buffalo, Coastal Carolina managed only a 28-25 win. Given that the Bulls just lost to Nebraska 28-3 in Week 2, it would’ve benefited the Chanticleers to really put on a dominant showing. Alas, they weren’t able to get that done. 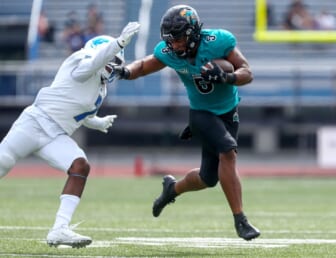 Cincinnati’s playoff chances are presumably much better, but now there’s reason for doubt. The same Indiana team that got obliterated 34-6 by Iowa in Week 1 pushed the Bearcats to the brink, as the 38-24 final score doesn’t reflect how close the outcome truly was.

Keep an eye on how Cincinnati responds to this. Next up is a trip to Notre Dame. If the Bearcats soundly beat the Irish, that could be the quality win they need to catapult nearer to the top four teams.

Penn State is officially back under James Franklin

When the Nittany Lions lost their first five games last season, wow, it was a serious state of affairs in Happy Valley. Head coach James Franklin seemed like the fall guy who everyone blamed for the program’s declining direction.

Fast forward to post-Week 3: Penn State has now won its last seven games dating back to 2020, and held strong on a late goal line stand to defeat a formidable SEC foe in Auburn 28-20.

Home-field advantage definitely helped, yet this is the type of game the Nittany Lions really needed to show something. They confirmed that their Week 1 victory over Wisconsin wasn’t a fluke. As mentioned with the Michigan teams before, the Big Ten is rising in a big way, and the conference feels as wide-open as it has in several years.