For the second time this week, the WNBA’s best team defeated the WNBA’s worst team with the Seattle Storm taking a 79-69 win over the Indiana Fever.

The Storm now improve to 7-0 on the road with an overall record of 12-2. They are currently on a WNBA-high five-game winning streak. Meanwhile, the Indiana Fever have lost nine straight, dropping to 1-13 — one game shy of a franchise record losing streak.

Breanna Stewart came up big for the Storm, finishing with 21 points, 15 rebounds and three assists. She is averaging 20.3 points, 12.3 rebounds and 4.0 assists in her past four games, recording double-doubles in three of four games.

Teaira McCowan led the Indiana Fever with 13 points and 10 rebounds. She is averaging 12.0 points, 9.0 rebounds and 1.5 blocks in the four games since being moved from the starting lineup to the bench.

Unlike their Tuesday night matchup, the Fever were able to put up much more resistance against the Seattle Storm with both teams trading the lead back and forth for the majority of the first half. 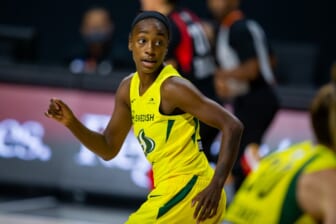 They would go on runs and build a decent lead but would be met with a response from their opponent each time ending with the Storm leading 40-36.

In the third quarter, the Storm began to turn the game in their favor building a 10-point lead with 1:30 remaining in the period. While the Fever would keep the game close, they were never able to regain the lead on their way to a ninth straight loss.