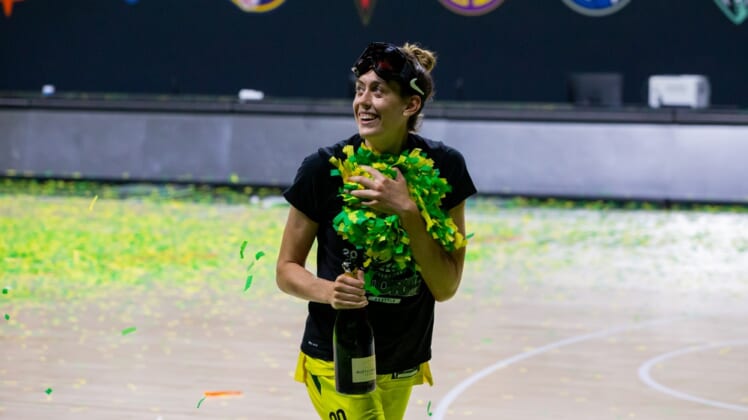 In a matchup between the Seattle Storm and the Indiana Fever, the teams with the best and worst record in the WNBA, it was the Storm that came out on the winning side by the score of 87-70.

The Storm have now won four straight, improving to 11-2 on the season while the Fever have lost eight straight and dropped to 1-12.

With the win, the Seattle Storm remain the only team in the WNBA that has not lost a game away from their home floor, improving their road record to 6-0. They are six games away from tying the WNBA record for consecutive road wins set by the Los Angeles Sparks during the 2000 season.

Meanwhile, the Indiana Fever are off to their worst start through 13 games since the 2018 season when they also began 1-12. That season along with their inaugural 2000 season saw them set a franchise record for their longest losing streak at 10 games in a row.

Jewell Loyd continues her great play this season with 18 points, six rebounds and four assists while Sue Bird finished with an efficient 17 points on 6-of-7 shooting from the field along with four assists and three rebounds. Bird also connected on three three-pointers firmly placing herself in second place on the WNBA’s all-time three-pointers list.

Kelsey Mitchell led the Fever scoring a game-high 26 points along with four assists and two steals. Despite the Fever’s struggles, Mitchell has been a bright spot for the team averaging 20.3 points on 48% shooting in her past four games.

The Fever actually started this game off well taking an 11-9 lead with 5:03 remaining in the first quarter. However, the Storm began to take control of the game outscoring the Fever 16-5 for the remainder of the period. Jewell Loyd and Breanna Stewart combined to score 19 points in the first quarter.

The Seattle Storm coasted through the second quarter to end the first half leading 41-33. Stewart scored 14 of her 20 points in the first half.

The second half was more of the same as the Storm outscored the Fever 46-37 on their way to victory. The turning point in the game came in the fourth quarter when the Storm’s lead was trimmed to 66-57 with 7:18 remaining. Seattle would go on an 11-0 run over the next 2:22 to take a game-high 20-point lead putting the game out of reach.

Kelsey Mitchell did her best to keep her team in the game scoring 21 points in the second half, including 11 fourth quarter points.