San Francisco 49ers coach bashes tenure with Chargers: ‘This is what winning is supposed to be like’

San Francisco 49ers assistant head coach Anthony Lynn believes there are some big differences between how his current team and his former employer the Los Angeles Chargers operate. And it seems to come down to a desire to do everything necessary to win.

Despite a 12-win year and only one truly bad season (5-11 in 2019), Anthony Lynn was handed his pink slip and dismissed from his role as Los Angeles Chargers head coach after four seasons in 2021.

The move was a surprise considering his overall record at that time (33-31), the team seemed to be rich in potential, and he was one of the few minority head coaches in the industry. Nevertheless, the dog-eat-dog nature of the sport won out and Lynn was dismissed and he took his services to Detroit the following year to serve as their offensive coordinator.

Before this season, he moved again and became the assistant HC and running backs coach for the San Francisco 49ers. A franchise that won the division two times and went to the NFC championship game twice in the previous three seasons. Unsurprisingly, the organization has a winning culture that was easy to see for Lynn in just one season. Something he didn’t find in LA.

Following the 49ers’ impressive victory over the Seattle Seahawks during Wild Card Weekend, Lynn spoke to the Los Angeles Times about his time as a coach in San Francisco. And he couldn’t help but shower the franchise with praise. And also take a bit of a jab at the Chargers.

“This organization will do whatever it takes to win. Resources out the [ears]. That was different for me compared to what I was going through in L.A. So it’s just like, man, this is what it’s supposed to be like. I forgot how that felt.”

The comments are even more impactful considering how the Chargers performed in 2022-2023. While they did win 10 games and earn a spot in the playoffs, there were questions about the decision-making of the man that replaced Lynn, Brandon Staley. Then the team blew a 27-0 lead and lost in their playoff game against the Jacksonville Jaguars on Wild Card Weekend. Staley is not expected to be relinquished of his duties. 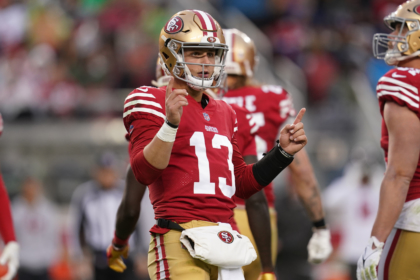 The San Francisco 49ers will look to punch a ticket to a second straight NFC Championship game when they face the Dallas Cowboys at 6:30 PM this Sunday on Fox.