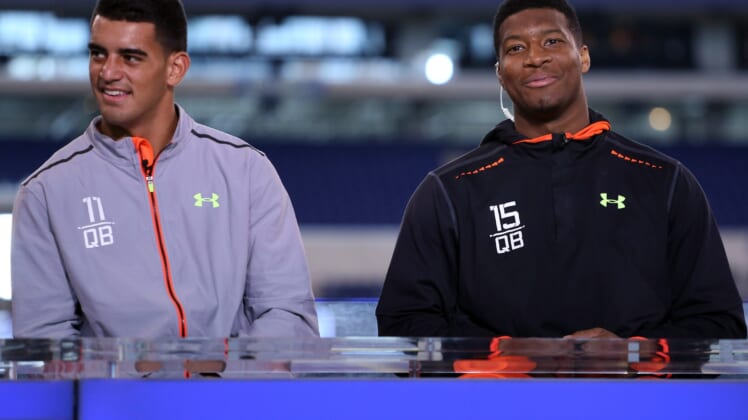 The No. 1 and No. 2 overall picks from the 2015 NFL Draft, Jameis Winston and Marcus Mariota, are both on the outs with their respective teams.

According to Mike Freeman of Bleacher Report, who spoke with several fron-office sources, the Tampa Bay Buccaneers and Tennessee Titans are both expected to “reset their sights” at the quarterback position.

Tennessee has already benched Mariota. He didn’t make it out of the team’s Week 6 loss to the Denver Broncos, and Ryan Tannehill has already been announced as the team’s starter for Week 7 against the Los Angeles Chargers.

Winston is coming off a brutal start against the Carolina Panthers which saw him turn the ball over an astonishing six times — five interceptions and a lost fumble.

The two former top picks have certainly struggled throughout their careers.

What Freeman is hearing from NFL executive is that these two are not only on the way out within their organizations but that they’re no longer seen as potential franchise passers, too.

Of course, it’s possible that this perception changes over time. New surroundings with new teammates and new coaches may lead to a turnaround. Unfortunately, both of these still-young quarterbacks seem to be regressing, rather than progressing, in their fifth years.