Most of the sports world supported the decision to move the MLB All-Star Game out of Atlanta, but others were disgruntled by the politically-charged change. 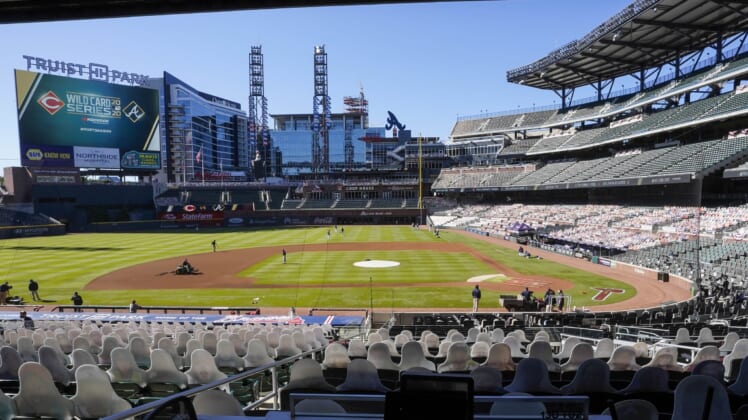 Sep 30, 2020; Cumberland, Georgia, USA; A general view of the inside of the stadium prior to the game between the Atlanta Braves and the Cincinnati Reds at Truist Park. Mandatory Credit: Dale Zanine-USA TODAY Sports

It was revealed on Friday that the MLB All-Star Game won’t be played in Atlanta this year, and that set social media ablaze with reactions to the polarizing decision.

In an official statement, MLB commissioner Rob Manfred explained that the decision was politically motivated by a recently-passed bill in Georgia that’s viewed as a vehicle for voter suppression, per CBC News Alerts:

The Atlanta Braves struck a decidedly different tone in their response to MLB’s decision, suggesting that their community was a great place for hosting the MLB All-Star Game and shining more light on the political issue at hand:

It’s unclear where the new venue will be for the 2021 MLB All-Star Game, but while the Georgia law in the spotlight is indeed detrimental to the right of voting, it is true that an entire state of people aren’t all to blame for the legislation materializing. However, the city of Atlanta is being penalized as such.

The MLB Draft was slated to take place in Atlanta as well, but that’s no longer happening either.

All told, though, the reaction from around the sports world regarding Manfred’s landmark call to move the game from Truist Park was largely positive.

Top reactions to MLB All-Star Game moving away from Atlanta

The intersection of politics and sports is always a controversial one, yet most in the sports realm were pleased to hear that MLB was taking a stand, including new Boston Red Sox partial owner LeBron James and Los Angeles Dodgers co-owner Magic Johnson.

But beyond the sports world, there were plenty of other irate public figures who weighed in on the matter, not least of whom was Georgia governor Brian P. Kemp and other Republicans who argued vehemently against the MLB All-Star Game’s moving: