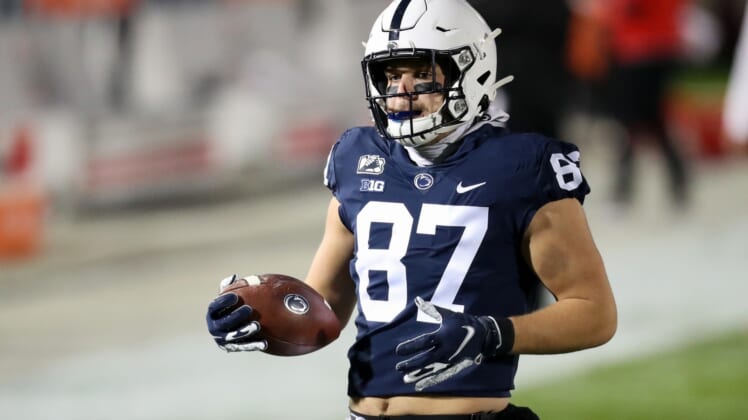 The Pittsburgh Steelers drafted Penn State Nittany Lions tight end Pat Freiermuth with the 55th pick in the 2021 NFL Draft, making him the second tight end off the board and the first on Day 2.

Freiermuth, a first-team All-Big Ten selection this past season, stands at 6-foot-5. While the Nittany Lions had a disappointing 2020 season, their star tight end was a focal point of the offense. Unfortunately, his final collegiate season was cut short due to a shoulder injury.

A four-star recruit in the 2018 class, per 247 Sports, Freiermuth rated as the No. 9 tight end in the nation coming out of Brooks School. Atlanta Falcons tight end Kyle Pitts, the No. 4 overall pick n the 2021 NFL Draft, and Day 2 prospect Brevin Jordan were also a part of that recruiting class.

With more NFL teams finding ways to get two tight ends on the field, Freiermuth should make an immediate impact for the Pittsburgh Steelers The adjustment period for tight ends in their rookie season is typically slow, but this is a player with the talent to contribute in 2021.

The 60th-ranked player on our NFL Draft big board, Freiermuth’s size, physicality and route-running ability can help him become a consistent weapon in the passing attack. There have been NFL comparisons to a poor man’s Rob Gronkowski, largely due to his size, hands and receiving ability.

One trait that will help him see the field early, Freiermuth is very comfortable serving as a blocker. Pro Football Focus credited him with a 74.8 run-blocking grade this past season. If he improves his technique, paired with his existing physical traits, Freiermuth will be an every-down player for years to come.

From a fantasy perspective, this isn’t an ideal landing spot. Eric Ebron remains a key part of the passing attack and will be a red-zone option for Ben Roethlisberger in 2021.

As for the pick itself, the decision is baffling. Offensive line was the Steelers’ biggest need entering the draft and they’ve now passed on addressing it twice and instead chose a running back and tight end.

The Pittsburgh Steelers are scheduled to make their next pick when they are on the clock with the 87th overall pick in Round 3. With offensive linemen flying off the board, their options there won’t be promising.