The Philadelphia 76ers had been shopping the 23rd pick in Thursday night’s NBA Draft to find more proven talent.

That came to fruition before front office head Daryl Morey and Co. were on the clock. According to ESPN’s Adrian Wojnarowski, Philadelphia has sent said selection and inured veteran Danny Green to the Memphis Grizzlies in exchange for guard De’Anthony Melton.

This is the type of rotational piece Philadelphia had been targeting since it lost to the Miami Heat in the Eastern Conference Semifinals. The idea is to find more depth behind starting guards James Harden and Tyrese Maxey. 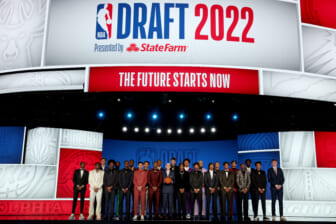 Details of De’Anthony Melton trade to the Philadelphia 76ers

With the 23rd pick, Memphis selected forward David Roddy from Colorado State. This came after the Grizzlies had pulled off another trade earlier on Thursday — acquiring the 19th pick for the 22nd and 29th selections from the Minnesota Timberwolves.

As for Philadelphia, the 24-year-old Melton is a darn good addition. He’s a former second-round pick from back in 2018 and has produced at a high level recently.

Melton has proven he has the capability of knocking down the perimeter shot while playing darn good defense. He’ll be a core piece for the Philadelphia 76ers off the bench moving forward.