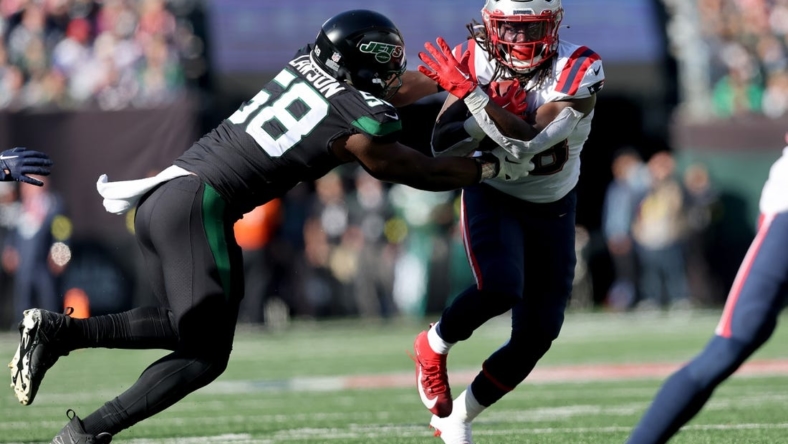 Bill Belichick became the second-winningest coach in NFL history and Nick Folk kicked five field goals as the New England Patriots pulled off a 22-17 victory over the New York Jets on Sunday in East Rutherford, N.J.

Folk, who played for New York for seven seasons, made field goals of 31, 42, 49, 45 and 52 yards. Mac Jones completed 24 of 35 passes for 194 yards with one touchdown and one interception, and Rhamondre Stevenson finished with 143 yards from scrimmage (72 receiving, 71 rushing).

Jets quarterback Zach Wilson struggled despite throwing for 355 yards and two touchdowns. He completed just 20 of 41 passes and threw three interceptions. Garrett Wilson hauled in six of those completions for 115 yards, and Tyler Conklin had two receiving scores.

Following halftime, the Patriots’ offense came out roaring, driving 62 yards in six plays to claim a 13-10 edge. Jones capped the march with a 5-yard touchdown pass to Jakobi Meyers and, after Greg Zuerlein missed a 45-yard field goal, Folk made it a two-score game with a pair of field goals.

Zach Wilson threw a 9-yard touchdown to Conklin with 1:51 remaining, but the Jets could not recover the ensuing onside kick.

New York took a 10-3 advantage with 12 minutes left in the second on Zach Wilson’s 8-yard TD pass to Conklin.

Cornerback Michael Carter II seemed to extend that lead when he intercepted Jones and sprinted 84 yards to the end zone, but the pick-6 was nullified due to a roughing the passer penalty.

Folk then put a 42-yard field goal through the uprights five plays later, pulling the Patriots within 10-6 as time expired in the first half.

The Jets reached the New England 12 on their second drive of the game thanks to Garrett Wilson’s 54-yard reception, but they had to settle for Zuerlein’s 28-yard field goal to open the scoring.