Recent rumors suggest that the Golden State Warriors could offer up a bounty to the Toronto Raptors in exchange for star forward Pascal Siakam.

Whether Siakam is even on the table in trade talks remains to be seen. It’s all dependent on how Raptors president Masai Ujiri views their ability to contend short-term following a brutal 2020-21 season and with franchise stalwart Kyle Lowry slated to hit free agency.

This trade enables an improved Wiggins to return to his native Toronto and act as an anchor for the Raptors’ rebuild. In what was his best season yet, the former No. 1 overall pick averaged 18.6 points and 4.9 rebounds on a stellar 48% shooting from distance. Heck, he received one vote for the All-NBA Defensive Team. That shows us how much Wiggins has improved since his days with the Minnesota Timberwolves.

Adding to the potential of the Raptors pulling off a coup here is the fact that they’d receive the No. 7 overall pick, originally acquired from Minnesota in the Wiggins for D’Angelo Russell swap. Talk about coming full circle. This would give Toronto two of the first-seven picks in the 2021 NBA Draft. Perhaps, a trade up with the Detroit Pistons for Cade Cunningham could be in the cards. 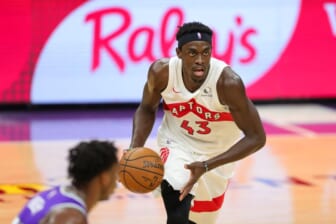 This is also a rather simple premise for Golden State in that the 27-year-old Siakam is just now entering his prime and could be seen as a building block with the likes of Stephen Curry hitting the back-end of their respective primes. He’d team up with Draymond Green and James Wiseman to form one heck of a backcourt with Curry and Klay Thompson doing their thing outside. That’s a championship-caliber starting five.

Talk about a major blockbuster trade. In addition to netting Wiggins, the Raptors land former No. 2 pick James Wiseman to be a central part of their rebuild program. Wiseman, 20, is seen as an enigmatic figure around the NBA after an up-and-down rookie season. But the raw talent is clearly there for him. In short, the former Memphis star has an ability to be a transcendent player in the Association and has not come close to hitting his ceiling.

In addition to this, Toronto nets two lottery picks for the price of one. That’s the cost of making a move for Wiggins and Wiseman. At the very least, this would give the Raptors five potential core players if you take into account talented young forward Eric Paschall.

From a Warriors perspective, the idea would be to not only add Siakam to the mix but find another potential cornerstone with the fourth selection. Giving up the bounty mentioned above might be a deep price to pay, but this would set he Dubs up extremely well moving forward. Options with the fourth pick would include wings Jalen Green and Jalen Suggs as well as former USC big man Evan Mobley.

Pascal Siakam to the Golden State Warriors in three-team trade

Get all of that? As we’ve noted before, three-team trades can be a bit convoluted. But this one seems to make sense for all involved parties. For Philadelphia, the ability to acquire two lottery picks in the 2021 NBA Draft and a 2025 unprotected first-round pick from Toronto for a player in Ben Simmons who seemingly has limited trade value would be an absolute steal. Front office head Daryl Morey could use those picks and potentially even Andrew Wiggins to find a true No. 2 option for reigning NBA MVP finalist Joel Embiid. Damian Lillard, anyone? 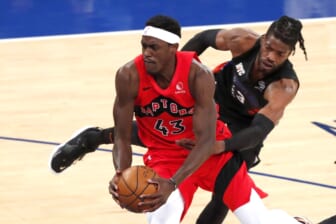 As for Toronto, it opts to build around two high-upside youngsters in Simmons and Wiseman while moving off the fourth selection in the 2021 NBA Draft. A starting group consisting of Simmons, Fred VanVleet, Chris Boucher, Wiseman and potentially Gary Trent Jr. would be nothing to sneeze out back east.

In turn, the Warriors sacrifice their future by being able to land Siakam to team up with Draymond Green inside. They also keep the seventh pick to add young talent to an aging core. It would be the best of both worlds for general manager Bob Myers and Co.