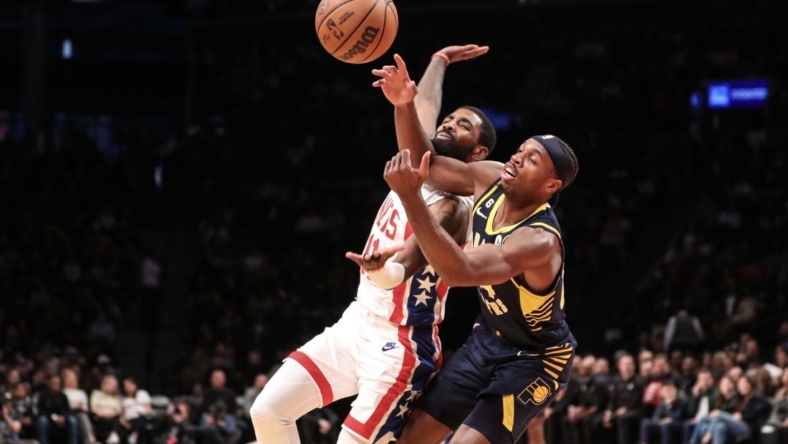 Rookie Bennedict Mathurin scored a career-high 32 points as the visiting Indiana Pacers hit a team record 23 3-pointers and pulled away for a 125-116 victory over the struggling Brooklyn Nets on Saturday night in New York.

Playing on the second night of a back-to-back, the Pacers tied their previous team record for 3-pointers, 22 set twice in May 2021, when Chris Duarte connected from deep for a 111-101 advantage with 6:14 remaining.

Indiana hit its 23rd 3-pointer when Mathurin connected from the corner with 2:33 left to put Indiana ahead 121-109.

Mathurin made 8 of 16 shots and hit six 3-pointers off the bench as Indiana’s reserves totaled 47 points. Mathurin also became the first Pacer rookie to score at least 30 points as a reserve since Myles Turner on Jan. 22, 2016, at Golden State.

The Pacers shot 42.6 percent for the game and made half of their 46 3-point tries.

Tyrese Haliburton added 26 and tied a career high with six 3-pointers to go along with eight assists for Indiana, which broke a seven-game losing streak to Brooklyn. Isaiah Jackson collected 18 points and 10 rebounds, and Indiana outrebounded the Nets 53-34.

Buddy Hield nearly posted a triple-double by totaling 17 points, nine boards and eight assists as the Pacers handed out 31 assists.

Kyrie Irving led all scorers with 35 points for the Nets. Kevin Durant added 26 but missed 12 of 20 shots as the Nets lost their fourth straight. Royce O’Neale and Joe Harris contributed with 11 points apiece.

The Nets shot 50 percent from the floor but also allowed 17 offensive rebounds.

After taking a 63-62 lead into halftime, the Pacers held a 92-90 edge into the fourth before surging down the stretch.

Irving’s three-point play cut Indiana’s lead to 98-95 a little over two minutes into the fourth. The Pacers opened a 118-103 lead on two free throws by Mathurin with 4:18 left to ice the win before he hit the record-setting 3-pointer.