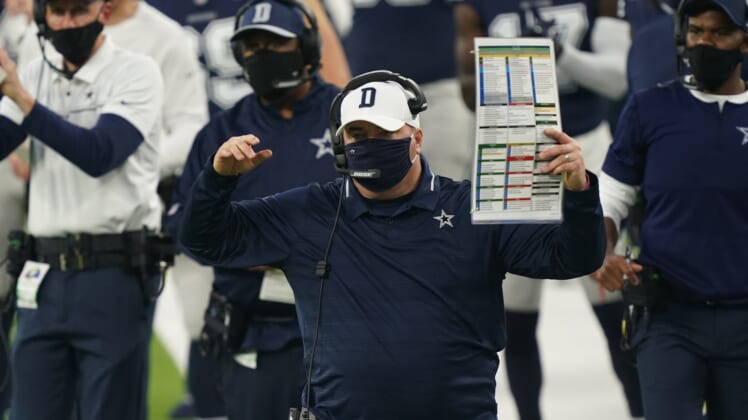 The Los Angeles Rams opened the brand new SoFi Stadium in Southern California Sunday night. What was a heck of a battle between the conference rivals, the Rams came out on top by the score of 20-17.

There was a lot that happened on the field in Los Angeles. From a horrible coaching decision by new Cowboys head coach Mike McCarthy to a questionable call late in the game, this matchup was not without controversy.

Those two aspects are among winners and losers from the Rams’ narrow three-point victory over the Cowboys.

Elliott put up a solid 66 yards and two touchdowns on 11 touches in the first half alone. This is a represention of just how much of a difference maker he can be in the Cowboys’ offense, both through the air and on the ground.

Despite the Cowboys falling behind again early in the third quarter, offensive coordinator Kellen Moore decided to still ride the Pro Bowl running back. Elliott put up 127 total yards on 25 touches, leading an otherwise pedestrian performance from the Dallas offense in Week 1.

Fresh off inking a massive contract extension with the Rams earlier this weekend, the expectation was that Kupp would be in for a huge game against a suspect Cowboys secondary. The former Eastern Washington standout was coming off a 2019 campaign that saw him record 94 receptions and 10 touchdowns.

He just did not have it against Dallas Sunday evening. Kupp, 27, caught all of four passes for 40 yards in a questionable overall performance. Los Angeles needs him to step up after Brandin Cooks was traded for salary reasons during the offseason. If Week 1 is any indication, he might not be up to the task.

An absolute force. The single-most dominating defensive player of his generation. However we want to define what Donald has brought to the mix since being selected in the first round of the 2014 NFL Draft, the three-time Defensive Player of the Year still has it at 29. An injury-plagued Cowboys offensive line found that out first hand Sunday evening.

Donald recorded a whopping four quarterback hits to go with one tackle for loss and another sack. He was consistently in Dak Prescott’s face throughout the game, especially when it counted the most. Los Angeles will need much more of this from its best player if the team wants to rebound from a down 2019 season.

Down 20-17 early in the fourth quarter, Dallas was facing a fourth-and-three from the Rams’ 11-yard line. The obvious choice would have been to call on former Rams kicker Greg Zuerlein for the game-tying field goal. Instead, McCarthy decided to be bold in his debut as the Cowboys’ head coach.

It backfired in a way we have not seen in a while. Dak Prescott connected with CeeDee Lamb on a pass short of the yard-to-gain marker, leading to a turnover on downs. After Dallas was unable to get into field goal range in its final possession, this decision ended up being the difference in the game. Just disastrous stuff from Mr. McCarthy here.

With Kupp struggling to do much in this game, the Rams needed another receiver to step up. Woods did that early on with some big catches on Los Angeles’ game-opening 75-yard touchdown drive. After struggling through the middle part of the game, the former USC standout picked it up big time when the Rams needed it the most in the second half.

Woods is one of those underrated possession receivers who can help a quarterback like Goff move the sticks. At nearly every turn, that’s what we saw Sunday night against the Cowboys.

For the most part, officiating was good on Sunday. We really can’t say that about the crew on hand a SoFi Stadium. More than anything, it was a weak offensive pass interference call on Cowboys receiver Michael Gallup against Jalen Ramsey that stood out.

With Dallas down 20-17 late in the fourth quarter and attempting to get into field goal range, Dak Prescott hit Gallup down the left hash for a huge gain inside Los Angeles’ 20-yard line. Unfortunately, Ramsey sold a pass interference call.

Did Gallup extend his arms? Did the contact enable him to make the catch? It really doesn’t look like that happened. The end result was a penalty against Dallas and pretty much any hope of a comeback being snuffed out.

One of the best edge pass rushers during his time with the San Francisco 49ers, Smith had not suited up for a game prior to Sunday night since all the way back in 2015. The story is by now well known. A former top-10 pick from Missouri, numerous off-field incidents led to the demise of a once-promising career.

Now 30 years old, Smith was out there in Los Angeles looking like his old self. That included former All-Pro forcing a Jared Goff interception in the third quarter.

With Dallas in need of a stop in the final stanza, Smith came through with a huge third-down sack of Jared Goff to stop a drive in its tracks. Talk about making a major statement in your first action in nearly five years.