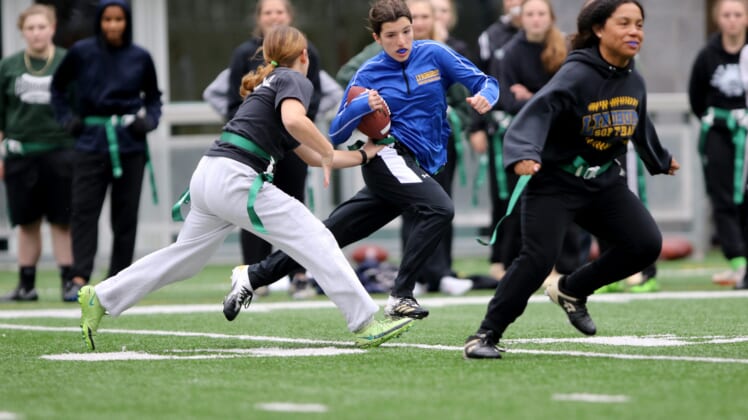 How does a sport that’s already the most popular in the United States become just as viral worldwide? The NFL might be looking to solve that question by getting involved in the 2028 Los Angeles Summer Olympics via flag football.

We’re not ignorant, there are plenty of American football fans reaching all across the globe, not just in America, but the global popularity doesn’t even compare to its attention stateside. The NFL would like to work toward changing the guard, if you will.

NFL spokesman talks about desire to build off flag football

In an attempt to grab a larger piece of the pie, the NFL seems to be targeting a simpler form of football that still contains many of the main components, which is passing, catching and running with the football while attempting to make your opponent miss behind a line of blockers.

The NFL broke down their 10-year international plan to develop a stronger following overseas, as well as stateside in a recent interview with CNBC during the league’s annual owner meetings. Here’s a few bits of that conversation.

Leech went on to say his belief that the NFL will add 50 million fans internationally over the next 10 years, which considering there are already an estimated 150 million domestic consumers, adding a third of their existing fanbase would be a massive feat.

They believe there will be a larger calling and interest in flag football and have even begun experiments to an extent. In February of 2022 during Super Bowl weekend, the NFL orchestrated a flag football event between the U.S. and Mexico, consisting of both men and women, in which they played a game of five-on-five.

We could see another opportunity for flag football to thrive at the 2022 World Games, which will take place in Alabama from July 7-17.

While you won’t see the hardnosed tackling machines, well you might, but more so in the emphatic ripping of flags to the ground from an inspired athlete, which in this case is a much safer method. The purists can say what they want, comparing tackle football to flag football, but this isn’t a bad step toward continuing to grow the game’s popularity as a whole.

For football, it’s different. Your average human being isn’t looking to go out and get pummeled into the dirt. Flag football provides a different opportunity to still play a game billions of people love without feeling the dangers of getting hurt before they have to go to school or work the next day.

It will never replace the game we all love completely, but allowing more individuals to experience it, and hopefully develop more passion for an exhilarating competition, well that’s a win.